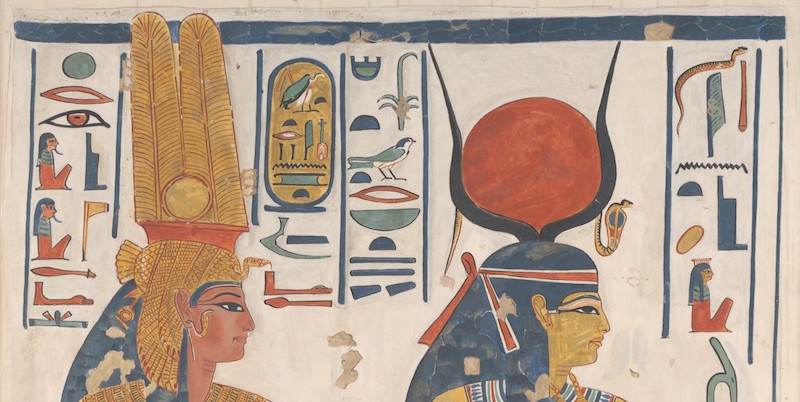 What a Woman Must Do to Become King

On the Rise of Neferusobek, Egypt's First Female Ruler

There are times in human history no one wants to live through. The Bronze Age Collapse of the 13th-century B.C. The Assyrian sack of Thebes in 663 B.C. The fall of the Roman Empire in the fifth century. The Black Plague of the 14th century. We read about such times and wonder how we would react if faced with such adversity. Did Neferusobek have second thoughts as she entered this new phase of her life?

Because Egypt’s prospects would soon plummet, the entire land poised to enter a new phase of uncertainty and panic, its strength about to be cruelly tested. The signs were already there on the horizon. There had been a series of low Nile inundations, resulting in poor harvests during the last years of her father’s reign, a trend that only continued into her brother’s time as king. Famine and drought caused widespread destabilization and misery, much worse than an overly long reign coupled with inbreeding could ever produce.

Whatever her thinking on her new situation, Neferusobek became Egypt’s first female king. For the Egyptians who went all-in with her, there must have been a collective decision among the highest courtiers to formalize this unprecedented instance of female power, to have Neferusobek go through the weeks of temple activities, initiations, meditations, and ceremonies that invested her with the divine power of sovereignty (which, everyone now solemnly agreed, she had possessed, unrecognized, since the time of her birth). For her countrymen, there was no longer any point in referring to her as “queen.” That title was only used for women subservient to their sovereign. Now that Amenemhat IV was dead, leaving no male heir, it was up to Neferusobek to protect the family dynasty as (S)he of the Sedge Plant and the Bee, Mistress of the Two Lands, and Daughter of Re: kingly titles that were feminized specifically for her in Egyptian hieroglyphic inscriptions. She was king. Nothing else.

Stepping into her new role, Neferusobek got busy. She had her images placed in temples all around Egypt; three statues were found at Tell el-Da’ba in association with Dynasty 12 temple installations. Frustratingly, none of her named statues have her face preserved. One of these sits in the Louvre today. Unfortunately headless, it depicts her wearing the Nemes headdress falling over her shoulders, the very same striped headcloth that Tutankhamun would wear much later in his golden funerary mask. This headdress was a marker of kingship, to be sure, even though we can see that this statue represented a woman in a dress with shoulder straps. Neferusobek, it seems, was openly admitting her feminine gender in her new representations, but combining it with traditionally masculine kingship. She is wearing a queen’s dress, but she has tied on the kilt of kingship over her feminine garb, knotted much higher than a masculine king’s kilt would have been: above her navel and just below her breasts. Around her neck she wears the same pierced heart amulet worn by her grandfather and her father, a sign of Dynasty 12 strength and of her direct linear descent from those great kings. She did not lie to her people or to her gods about her gender; her femininity was there for all to see. And yet she layered the masculinity of her new office over her feminine self.

Some of us may wonder why women need to embrace masculine clothing and mannerisms in order to display power. When we think of the array of fashion choices available to the modern woman and the simultaneous strictures imposed on those who dare to occupy positions of power, the options narrow considerably. The power suit is one alternative for the ambitious woman, but does one wear trousers or a skirt? Does one include something as masculine as a tie? Usually not, as it implies a certain sexual identity. Can cleavage be shown? Doubtful, but it depends on a woman’s age. High heels finish out the look, allowing a woman to be perceived as taller, approaching the heights of the men around her, but heels too high are viewed as slutty. Still, the woman in power must masculinize more than her dress. She must change her voice, too, forcing it to be modulated and lower. A quick perusal of YouTube videos of Hillary Clinton from her first presidential run in 2008 and her later bid in 2016 indicates she also got the message to de-feminize her speaking style. These contortions to which women must commit are in no way new to humankind, as the example of Neferusobek demonstrates.

“There was no longer any point in referring to her as “queen.” That title was only used for women subservient to their sovereign.”

Neferusobek also seems to have masculinized her own face. If a statue fragment in the Egyptian Museum in Berlin (it was destroyed in Allied bombing runs) belonged to Neferusobek, then her visage was fearsome, awe-inspiring, even terrifying to behold. Copying the intimidating statuary of her grandfather, Senwosret III, and her father, Amenemhat III, this statue shows a formidable woman with high cheekbones, a face carved with worry and attention, deep-set eyes that could spy on even the sneakiest of officials, and giant ears that could hear even the barest whisper of a future traitor. Her forehead was high, her brow ridge low and intent, her mouth absolutely unsmiling: not just fierce, but dour. This statue remains unmarked and uninscribed, but there is compelling evidence that it could be Neferusobek as queen or king.

The gender ambiguity was not to stop there. When she ascended the throne, five royal names were bestowed upon Neferusobek. Each reflected the unexpected, novel, and (we should assume) anxious situation of a female taking the throne in the absence of a male heir. Hers is the first full titulary (all five names) that we have for a female king of ancient Egypt, and it seems she worked with her priests to make some clever adaptations to convey femininity of person with masculinity of activity.

First off, her Horus name was written as a feminized version of a Horus bird: Heret, not Her—a female falcon, Horusette, if you like. We have come far from Dynasty 1, when Merneith could take no claim to the kingship, earning a stela with her name and a tomb in a necropolis reserved for kings—but bare of title with no Horus falcon to adorn her tomb marker. Neferusobek was allowed to become not only a Horus king but a female version of that hawk, representing the same far-seeing omniscience. Her Horus name was Meryt-Re, “Beloved of Re,” similar to Dynasty 12 priestess titles and thus granting the expected religious aspect to her rule. With this name, Neferusobek and her supporters seem to be claiming both that she was beloved of the sun god himself and that one of her foundations of power was her priestly affiliation before she took the kingship.

Neferusobek’s next name, her Two Ladies appellation, linked her kingship directly to her father, Amenemhat III, with the phrase The Daughter of the Powerful One Is (Now) Mistress of the Two Lands—a name without doubt meant to assuage skittish officials worried about the prospect of a female king. The point is clear: She is making her claim to power through her lineage to her father. The daughter of one of Egypt’s most successful kings was stepping in to seal the breach; in other words, you can all relax now.

Neferusobek’s Golden Horus name was “The One Stable of Appearances,” a bit arcane and unclear. Intriguingly, the name links her to Osiris himself, because Osiris is connected to stability, but it is feminized, as if Neferusobek were claiming to be a female version of Osirianized rebirth that would enable Egyptian kingship to rise again in strength and glory. Her fourth name, her throne name, was enclosed in an oval cartouche as Ra-Ka-Sobek and translates as The Life-Force of Sobek Is Re: an indication that her own personal connection to the crocodile god Sobek through name and temple activity enabled nothing less than the rising and setting of the sun itself. And her last name, the birth name and the only part of this name she had owned before her coronation, was, of course, Neferusobek, meaning “The Beauty of Sobek [of the Fayum],” a link to the economic and political stronghold of her Dynasty 12 family.

“The woman in power must masculinize more than her dress. She must change her voice, too, forcing it to be modulated and lower. . . These contortions to which women must commit are in no way new to humankind, as the example of Neferusobek demonstrates.”

Now that she was invested with the weight of masculine kingship and its fivefold titulary, Neferusobek felt the need to communicate that this authority served not her alone, but all of Egypt. She was not taking on power in a selfish manner, but only to uphold her father’s dynasty, as a good daughter would. What better way to prove this point materially than to finish her father’s temple complex at Hawara, a wondrous and innovative place that classical authors would later call the Labyrinth? It would legitimize her kingship for all her elites to see because Hawara was located right next to their capital city of Itjy-tawy. When she finished her father’s pyramid complex, she made sure to mark the place with her own name as well. In fact, on one preserved column we see an evocative image of the transfer of power from father to daughter: The Horus falcon accompanying the name of her father hands the scepter of kingship over to the Horus connected to her own name. What seems like a selfless act of filial piety was actually a necessary ploy to legitimize her reign.

As Neferusobek ordered the pyramid complex finished, she also took an unprecedented step and ordered her father deified within his temple spaces. All kings were considered divine, to be sure, and all dead kings had a greater divinity among the company of ancestor kings, yes, but Neferusobek created special cult spaces for the worship of her father as a god at his temple at Hawara. In deifying him, she set aside extensive lands whose income of grain and flax and livestock would support an ongoing cult, paying priests an annual salary to regularly make offerings to the statues of the dead king, all in order to justify her own female kingship as ordained by the gods. Neferusobek would thus act as her own father’s chief priest(ess) in his temple cult: a brilliant ideological power move. 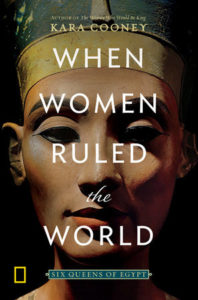 From the book When Women Ruled the World by Kara Cooney © 2018. Reprinted by arrangement with National Geographic Partners.

Dr. Kathlyn (Kara) Cooney is a professor of Egyptian Art and Architecture at UCLA. Specializing in craft production, coffin studies, and economies in the ancient world, Cooney received her PhD in Egyptology from Johns Hopkins University. In 2005, she was co-curator of Tutankhamun and the Golden Age of the Pharaohs at the Los Angeles County Museum of Art. Cooney produced a comparative archaeology television series, entitled Out of Egypt, which aired in 2009 on the Discovery Channel and is available online via Netflix and Amazon. Her latest book, When Women Ruled The World: Six Queens of Egypt, is available from National Geographic.

The Queering of Boundaries in Cristina Rivera Garza's Fiction

How Much Editing Was Done to Emily Dickinson's Poems After She Died? 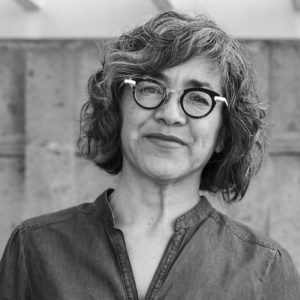 The Queering of Boundaries in Cristina Rivera Garza's Fiction

"Our bones are our ultimate testimony," writes the Mexican author Cristina Rivera Garza. "Will we be betrayed by our bones?" Bones...
© LitHub
Back to top
Loading Comments...