Jori and his cousin were cutting up, tossing snowballs at passing cars. From Jori’s street corner on Milwaukee’s near South Side, cars driving on Sixth Street passed squat duplexes with porch steps ending at a sidewalk edged in dandelions. Those heading north approached the Basilica of St. Josaphat, whose crowning dome looked to Jori like a giant overturned plunger. It was January of 2008, and the city was ex­periencing the snowiest winter on record. Every so often, a car turned off Sixth Street to navigate Arthur Avenue, hemmed in by the snow, and that’s when the boys would take aim. Jori packed a tight one and let it fly. The car jerked to a stop, and a man jumped out. The boys ran inside and locked the door to the apartment where Jori lived with his mother, Arleen, and younger brother, Jafaris. The lock was cheap, and the man broke down the door with a few hard-heeled kicks. He left before anything else happened. When the landlord found out about the door, she decided to evict Arleen and her boys. They had been there eight months.

The day Arleen and her boys had to be out was cold. But if she waited any longer, the landlord would summon the sheriff, who would arrive with a gun, a team of boot-footed movers, and a folded judge’s order saying that her house was no longer hers. She would be given two options: truck or curb. “Truck” would mean that her things would be loaded into an eighteen-footer and later checked into bonded storage. She could get everything back after paying $350. Arleen didn’t have $350, so she would have opted for “curb,” which would mean watch­ing the movers pile everything onto the sidewalk. Her mattresses. A floor-model television. Her copy of Don’t Be Afraid to Discipline. Her nice glass dining table and the lace tablecloth that fit just-so. Silk plants. Bibles. The meat cuts in the freezer. The shower curtain. Ja­faris’s asthma machine.

Arleen took her sons—Jori was thirteen, Jafaris was five—to a homeless shelter, which everyone called the Lodge so you could tell your kids, “We’re staying at the Lodge tonight,” like it was a motel. The two-story stucco building could have passed for one, except for all the Salvation Army signs. Arleen stayed in the 120-bed shelter until April, when she found a house on Nineteenth and Hampton, in the predominantly black inner city, on Milwaukee’s North Side, not far from her childhood home. It had thick trim around the windows and doors and was once Kendal green, but the paint had faded and chipped so much over the years that the bare wood siding was now exposed, making the house look camouflaged. At one point some­one had started repainting the house plain white but had given up mid-brushstroke, leaving more than half unfinished. There was often no water in the house, and Jori had to bucket out what was in the toilet. But Arleen loved that it was spacious and set apart from other houses. “It was quiet,” she remembered. “And five-twenty-five for a whole house, two bedrooms upstairs and two bedrooms downstairs. It was my favorite place.”

After a few weeks, the city found Arleen’s favorite place “unfit for human habitation,” removed her, nailed green boards over the win­dows and doors, and issued a fine to her landlord. Arleen moved Jori and Jafaris into a drab apartment complex deeper in the inner city, on Atkinson Avenue, which she soon learned was a haven for drug deal­ers. She feared for her boys, especially Jori—slack-shouldered, with pecan-brown skin and a beautiful smile—who would talk to anyone.

Arleen endured four summer months on Atkinson before moving into a bottom duplex unit on Thirteenth Street and Keefe, a mile away. She and the boys walked their things over. Arleen held her breath and tried the lights, smiling with relief when they came on. She could live off someone else’s electricity bill for a while. There was a fist-sized hole in a living-room window, the front door had to be locked with an ugly wooden plank dropped into metal brackets, and the carpet was filthy and ground in. But the kitchen was spacious and the living room well lit. Arleen stuffed a piece of clothing into the window hole and hung ivory curtains.

The rent was $550 a month, utilities not included, the going rate in 2008 for a two-bedroom unit in one of the worst neighborhoods in America’s fourth-poorest city. Arleen couldn’t find a cheaper place, at least not one fit for human habitation, and most landlords wouldn’t rent her a smaller one on account of her boys. The rent would take 88 percent of Arleen’s $628-a-month welfare check. Maybe she could make it work. Maybe they could at least stay through winter, until crocuses and tulips stabbed through the thawed ground of spring, Ar­leen’s favorite season.

There was a knock at the door. It was the landlord, Sherrena Tarver. Sherrena, a black woman with bobbed hair and fresh nails, was loaded down with groceries. She had spent $40 of her own money and picked up the rest at a food pantry. She knew Arleen needed it.

Arleen thanked Sherrena and closed the door. Things were off to a good start.

Eviction causes loss. Families lose their homes, schools, and neighborhoods—but also their possessions: furniture, clothes, books. It takes a good amount of money and time to establish a home. Eviction can erase all that. It also comes with a court record. Many landlords won’t rent to recently evicted families, and housing authorities treat eviction as a strike against those applying for public housing. The result is that evicted families often relocate to worse housing in more distressed neighborhoods. Eviction can cause workers to lose their jobs, because the stress and consuming nature of being forced from their homes wreaks havoc on people’s work performance.

Then there is the toll eviction takes on a person’s spirit. The violence of displacement can drive people to depression and, in extreme cases, even suicide. One study I published found that two years after their eviction, mothers still reported higher rates of depression than their peers. When you add all this up, the evidence is overwhelming. The lack of affordable housing, the gap between the need and the amount of housing aid offered, and the resulting common occurrence of eviction in struggling communities—these are main causes of poverty in America. We can’t fix poverty without fixing housing.

Powerful solutions are within our collective reach. But those solutions depend on how we answer a single question: do we believe that the right to a decent home is part of what it means to be an American? We have affirmed provision in old age, twelve years of education, and basic nutrition to be the right of every citizen because we have recognized that human dignity depends on the fulfillment of these fundamental human needs. And it is hard to argue that housing is not a fundamental human need. Decent, affordable housing should be a basic right for everybody in this country. The reason is simple: without stable shelter, everything else falls apart.

America is more than capable of delivering on this right. And I think the most effective way to do that would be to expand our current housing voucher program so that all low-income families could benefit from it. Universal housing programs have been successfully implemented all over the developed world. The idea is simple: every family below a certain income level receives a voucher, so that instead of paying 60 or 80 percent of their income to housing, they now pay 30 percent. A universal voucher program would change the face of poverty in this country. Evictions would plummet. Homelessness would almost disappear. Families would immediately feel the income gains and be able to buy enough food, invest in themselves and their children through schooling or job training, and start modest savings. They would find stability and have a sense of ownership over their home and community. We can do this. We can make our cities livable again.

From EVICTED. Used with permission of Crown. Copyright © 2016 by Matthew Desmond.

Matthew Desmond is the John L. Loeb Associate Professor of the Social Sciences at Harvard University and codirector of the Justice and Poverty Project. A former member of the Harvard Society of Fellows, he is the author of the award-winning book, On the Fireline, coauthor of two books on race, and editor of a collection of studies on severe deprivation in America. His work has been supported by the Ford, Russell Sage, and National Science Foundations, and his writing has appeared in the New York Times and Chicago Tribune. In 2015, Desmond was awarded a MacArthur “Genius” grant. 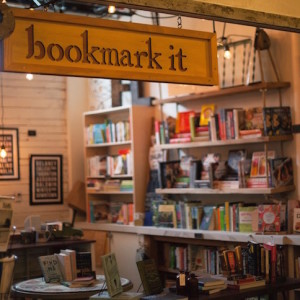 Bookmark It officially opened its doors on March 1, 2014 in a small, second-floor space. At that time, Orlando had no independent...
© LitHub
Back to top