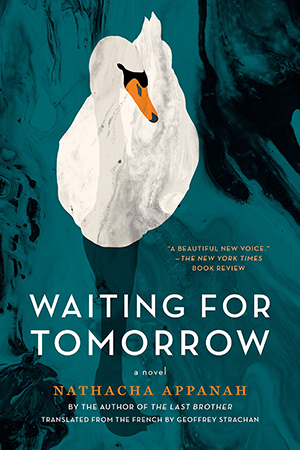 The following is from Nathacha Appanah's novel, Waiting for Tomorrow. Anita and Adam originally met at a New Year's Eve party in Paris, both feeling new and out of place in the city. Twenty years later, their marriage is feeling dull and monotonous, until the arrival of a new nanny. Nathacha Appanah works as a journalist and translator in Caen, France. Her previous book, The Last Brother, has been translated into 16 languages.

Anita is sitting, or rather crouching, hugging her upraised legs, head lowered, forehead resting on her knees, inhaling her own warm vanilla scent. There has been substantial traffic since she took refuge here. People walk in, dump their stuff on the pile that is already quite high or on top of her, and go out, laughing. Everyone is laughing this evening, animated by an unrelenting collective gaiety. This is how the new year must discover us when it arrives; sparkling eyes, open mouths, glass in hand, arm around a friend, body gyrating. Better that than huddled up on a green sofa, all alone and buried under a pile of coats.

And yet it had all started well. She had arrived with Christophe and they had been kissing. But when he had tried to slip his hand under her skirt she had slapped his face. Oh yes, it had been a real good slap, swift, hard, impossible to dodge. It had been a reflex action—and yet for such an action to occur doesn’t there have to be thought, a connection made, the alerting of the nervous system, the transmission of data? There was just that sudden impulse in her right hand, arising more or less at the level of her wrist (“an impulse arose,” that’s something she ought to write down in her notebook, where she writes things down, words, phrases, ideas for use later, in, shh, the novel). At the very moment when her hand was striking that boy’s cheek, she was once again astonished at the girl she had become. In the old days she would never have slapped him. She would have resisted, wriggling this way and that (in her mind’s eye she sees her place being taken by a fine silvery gray fish in Christophe’s grasp, he leans forward, his mouth half open, concentrating on his catch), she would have uttered frightened little squeals and her eyes would have filled with tears.

But here, in this city, Anita has become high-strung, impulsive, often filled with bitter anger. Once she used to write neatly turned, well-rhymed things, charming verses (the way you might knit a charming sweater, arrange a charming bouquet). She wrote what she saw: a bird on a branch, an innocent blue sky . . . and she won prizes for her poetry. She dressed in pastel shades and plaited her black hair into delicate braids.

Now jagged words well up inside her, arranging themselves almost involuntarily into poems that are published in a well-regarded literary magazine that sells few copies and is edited by François Sol. Thrilling poems, François Sol had said to her, some months previously, laying a hand on her arm. Anita is afraid of

François Sol, his office piled high with editions of classic writers published in the Pléiade series, anthologies, complete works, rare editions, his formal manner of speaking that seems like a putdown, the way he tosses a volume of Nietzsche or Kierkegaard or a copy of Ulysses nonchalantly onto the top of a pile, his questions and the advice that follows without his waiting for an answer to the question. (Have you read Joyce? You must read Joyce. Do you keep a diary? You must keep a diary.) The truth is that she dreads him examining her properly, with his gecko-green eyes, dreads him unmasking her beneath her heavy makeup, her military boots, and her hair bound tight, like a sailor’s knot, dreads him seeing beyond her vitriolic poems, beyond her gear, and dismissing her with vexing bluntness, a finger pointed at the door, the way one dismisses an imposter.

Five years ago she was still that young girl (a bird on a branch, an innocent blue sky) when she arrived in this city and a distant cousin met her at the airport and took her to her home, on the twenty-fourth floor of a tower block in the suburb of Rosny. Anita stayed for a week, the time it took for the promised room on the university campus to become free. There were sharp corners everywhere in her cousin’s apartment (little square rooms opening onto other rectangular spaces), and it was decorated with plastic flowers and pictures in relief representing scenes (ranging from the Eiffel Tower to the Arc de Triomphe). Everywhere a heavy scent of incense and spices. In this apartment, during the first few moments, as her mind and body took in this new setting that was as dismal as it was unexpected, Anita had wanted to become a child again, so that she could scream and weep and roll on the ground. An unbelievably powerful feeling overcame her when she thought about her parents, their house close to the sea, the spacious rooms flooded with light, the red waxed floor, the garden, their dog who was called Dog, the wide veranda where, as a child, she used to measure the progress of the dawning sun with her

school ruler. It was a mixture of nostalgia, sadness, desire, lack, a profound longing to be elsewhere—for the first time Anita was experiencing homesickness.

“At the very moment when her hand was striking that boy’s cheek, she was once again astonished at the girl she had become. In the old days she would never have slapped him.”

This cousin of hers, a woman who worked at night and slept by day, was afraid of everything: blacks, Sri Lankans, Romanians, motorbikes, young people, elderly whites pulling their shopping carts in the mornings, dogs, and the full moon. Anita remained a prisoner in that apartment for a week and it was there she wrote her first “New Poem.” There was no bird now, no blue sky. Instead grayness, metal, sulfur, bitter smells. The very things that François Sol finds thrilling.

Just now, having slapped that boy, having seen him put his hand to his cheek with a theatrically questioning look in his eyes (et tu, Anita?), she had muttered some words of apology and locked herself in the bathroom.

What is the matter with her? After all, she had been eager to come with Christophe that evening, she had drunk two glasses of the excessively strong punch, she had danced, she had thought about her parents, a notion that had swollen like a balloon in her stomach, colliding gently with her heart, making her want to cry. She had kissed Christophe. She liked him (a pleasant feeling that did not take up too much space within her) but then she had ruined everything. She would have liked to be able to explain to him, run past him again the film of them fondling one another and then stop it at precisely the moment when Christophe’s hand slides up under her skirt and she becomes the incarnation of the phrase simply in self-defense. I didn’t mean to do it, she would explain, it was just a reflex.

Anita looks around the bathroom. She does not know it yet, but this is her strength, she knows how to look: color, shade, shape, appearance, material, shadow, light, precise terms for things (mixer faucet, pedestal washbowl). Diverse objects (a large green plastic apple for storing cotton balls) take their places in a corner of her brain (that creature with a thousand lights, portals, hiding places, and passageways), go into hibernation, and are later reborn in a short story, a poem, the draft for a novel, an article.

She stands up, catches her reflection in the mirror. If she turns her head to the left she will see her father; if she screws up her eyes and smiles, she will encounter her mother’s features. She would so much like to be spending this New Year’s Eve with them, to be sitting on the veranda looking across at her parents. They would be listening to the radio, they would be reading, her mother would have gotten the three glasses ready, and the bottle of sparkling wine, her father would have taken out the fireworks for them to set off at midnight. What is the sky like on the other side of the world? How are the stars shining? Are her parents thinking of her at this very moment?

A bird on a branch, an innocent blue sky.

No, of course, she has no desire to become that Anita again (she thinks about herself as of a child, tenderly). But she would like to cease being what she is now, this girl forever rushing in, exaggerating her features, violating language. She washes her face vigorously with soap, rinses it with cold water, and spreads a dab of Nivea cream, found in the cupboard above the bathtub, over her skin. She looks at herself and on her face there is a hint of what she once was. Her eyes grow misty with tears. Homesickness overcomes her again.

Anita needs to escape. She feels unwell. She staggers out of the bathroom, the music seems to be erupting on

all sides, she is looking for the exit. She is looking for her coat. She does not want to go onto the dance floor, she collides with bodies (Watch out, Anita! she hears). She shrinks away and ends up on a sofa. She buries herself beneath the pile of garments, covers her ears, she’d just like to hear a jazz tune played on the piano, for a long time she does not stir.

Yes, that’s it. That’s it precisely.

It takes her a few seconds to realize that she was not the one who had said it (she thought it was the voice inside her head). There is someone else on the sofa. And this person says it again.

Before the new year discovers them locked in an unexpected embrace that will turn out to be amazingly sweet and delicious (Adam will think of his father, of their wooden house, of the silence of the forest on a snowy night, he will like her scent of vanilla and freshness; Anita will think of her parents, a jazz tune on a piano, she will like his scent of timber and salt: they will feel good), before the countdown to midnight is yelled by everybody at the tops of their voices, at the other end of the house, before they look at one another for the first time, she will finally smile at that repeated “I don’t belong here” and will reply:

Welcome to the club, my friend.

From Waiting for Tomorrow. Used with permission of Graywolf Press. Copyright © 2018 by Natacha Appanah.

Creating the Cafe Society I Always Dreamed Of 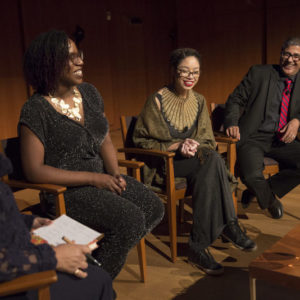 Celebrating Socially Engaged Fiction at the Aspen Words Literary Prize When Lesley Nneka Arimah sat down with her collection What It Means When A Man Falls From the Sky, she thought: “I hope...
© LitHub
Back to top