Runner is a Classic, Unsung Piece of Mid-Century Filmmaking

In 1962, Canada’s National Film Board commissioned a first-time director to make an 11-minute, black-and-white movie about a 19-year-old distance runner who would later become an Olympian, and have legendary poet W.H. Auden—not Canadian, and not a runner—write a poem as narration. Runner has receded into the archives of film history, and that’s a shame. This is why you should care about this strange little film.

Runner is the story of Bruce Kidd, a Toronto racer training for the Commonwealth games. I’ve never been one for inspirational videos, but I was hooked on Kidd’s story. Here was a teenager with an unorthodox running style: arms low, scooping the air in a movement newspapers called “dog-paddling.” But Runner is no average runner biopic: with a jumpy jazz soundtrack complemented by Auden’s poetic meditations on the beauty of running, the film is a reminder that running is natural, sleek, and in a word, cool.

The film begins with a side shot of Kidd running along a pier. His metronomic strides on the boards cut through the other sounds: soft waves against the shore, tweeting birds, and the calm narration. Auden’s lyric script was read by Don Francks, a Canadian musician and actor who starred in shows like The Man From U.N.C.L.E.

Kidd glides forward, caught in the peace of a long, evenly paced run. We then hear a roar of a plane in the distance, the occasional child’s voice, and the whistle of another man walking along the pier, but those sounds fade into the film’s melancholy grayscale.

Director Don Owen’s filmmaking is sleek and stylistic, but the form never overtakes the subject. Runner is Kidd’s story, and he’s a great athletic subject: a young dreamer, driven to succeed. The camera often moves from his face to his feet, both guided by a mix of optimism and focus. He would go on to shatter 15 Canadian records, and a few American records as well, including one when he beat New Zealand’s Murray Halberg, the 1960 5,000 meter Olympic champion.

Kidd retired from running shortly after the 1964 Olympics, and is now Principal Kidd—the Canadian term for university president of the University of Toronto at Scarborough. He’s had an impressive and diverse career; first as a professor of political science at Toronto, later as a dean, and then vice president of the entire University of Toronto college system. A scholar and an activist, he was an early voice in the fight against gender and racial discrimination in the track world.

I spoke with Kidd about the 55-year-old film. He was happy to have been a part of the film, but sad that all involved—from Owen on to photographers and sound editors—had since passed away.

Canada’s National Film Board (NFB) gave Owen “a budget, and said that you can make a film on anything you want.” If they liked that trial film, they would give him a permanent position. Owen chose to make a film about Kidd, whose parents were education scholars and activists, and well-connected to the NFB. Kidd was already a star runner. In January 1961, he blazed around Boston Garden’s indoor track to win the Knights of Columbus two-mile race in a meet-record 8:49.2—at only 17 years old. Wins like that established him as the premier distance runner in Canada.

He was an inevitable subject for a stylistic film about the sport. Kidd tells me his “earliest memories as a conscious human being involve the joy of running.” He remembers watching Roger Bannister and John Landy’s “Miracle Mile” in the 1954 British Empire Games in Vancouver, and began running long distances. “I kept it up because in the boring, constraining 1950s, track seemed to have unlimited potential; there were no fixed horizons.” Kidd and his fellow runners in the film appear playful, and a bit eccentric—a little band of nonconformists.

At first, Kidd was reluctant to make the film, worried it would take a lot of time. But he met Owen in Montreal after a track meet. “It was a warm and sunny weekend, and I stayed with him and his family and they showed me rue St. Denis and the Quebecois cultural awakening, the beginnings of the Quiet Revolution”—a time of political upheaval in Québec that led to the secularization of education and health care. Owen and Kidd “walked and talked endlessly, and I was entranced.”

Owen had long admired Auden, and contacted the poet early in the project. Kidd said Owen “did a long interview with me, and took the tape and the rushes of the film to Switzerland, where Auden was staying at the time, and the result is the commentary.”

Auden included some of Kidd’s own “phrasings in what he wrote.” I asked Kidd what it felt like to have a canonical poet’s meditations about his running; he says Auden’s narration “always seemed over-the-top but it was like a huge ray of sunshine, I basked in it.” When he actually was able to watch the film, he “was stunned that it was so beautiful, such a work of art.”

One source of that beauty is Auden’s eternally poetic lines. Owen was an admirer of the great Greek poet Pindar, and asked Auden to capture the ancient bard’s spirit in the narration. Auden was equally taken by the Greek poet; years earlier, he’d sent his friend T.S. Eliot “an attempt at Pindar’s kind of verse in English.”

Pindar’s most stirring works are his victory odes, penned to commemorate the winners of Greek games, including the Olympian and Pythian contests. Auden channeled Pindar’s views of winners and losers in Runner with magisterial flourish:

As Pindar long ago in Greece was proud to hail
Thessalian Hippokleas, even so
It is meet we praise in our days fleet-footed
Bruce Kidd from Toronto.

Owen’s tendency to isolate Kidd in the film also helped make the runner mythic. One scene begins with Kidd’s training at the East York Track Club, led by Fred Foot, a prototypical 60s coach who delivers clipped instructions (“Get your knees up.” “Relax your arms.”). Runner is a testament to the work of running, the necessity of training and mentorship:

By instruction only
Can limbs learn to live their movements
Without thinking.

Wearing a Malvern Collegiate T-shirt, Kidd looks young in the pack of fellow runners. Kidd said those older runners “looked out for me,” and in the film his footfalls seem to meld into theirs as they move forward as one—until Owen cuts to Kidd alone, bounding in slow-motion during a race. He kicks-up dust from the cinder track, almost disappearing into the haze.

I asked Kidd to watch the film again. “It gives me chills,” he says, “especially the last two laps of the race against (Laszlo) Tabori and (Max) Truex. You forget how much effort is involved in a long sprint like that, and how much you run with the fear that they might catch you.” That race is the film’s final sequence, a two-mile dash in front of a packed, jubilant crowd. He’s introduced over the public address as “Toronto’s own Bruce Kidd.” They are here for him. His hands push down as his arms churn, almost like he’s sending the wind to his feet. “Fate forbids mortals to be at their best always. / God given is the great day” Auden writes, as if to remind us that for all Kidd’s training and preparation, there is something more at work on race day. Auden’s mysticism somehow never becomes sentimental, in part because we’ve seen each step of Kidd’s progression: from a teenager running next to a windy beach to a racer focused on victory.

Kidd wins the race, and eases off the track and into the center grass. “The camera’s eye / does not lie / but it cannot show the life within.” He takes off his racers and goes for a barefoot jog as the end credits roll. There are no wild plays to the crowd. Kidd looks humble, accomplished, relaxed.

Runner captures a different time, what Kidd calls “the ‘last gasp’ of amateurism, when you were expected to excel in both sport and your studies as preparation for career and travel was considered an opportunity to broaden your horizons, so you made the most of trips rather than confining yourself to hotels and venues, the practice today.” He was still a teenager, a kid who’d been admitted to Harvard but chose the local University of Toronto, where he’d make a career.

Kidd thinks the final stanza of Auden’s commentary perfectly captures his lessons as a runner and racer, especially the last two lines: “Where Fate is Freedom, / Grace, and Surprise.” Runner ends where it begins, with Kidd alone, seemingly lost in the calm and focus of his thoughts despite the noise around him. The film is from another era, but it is a welcome reminder of the pure soul of running. 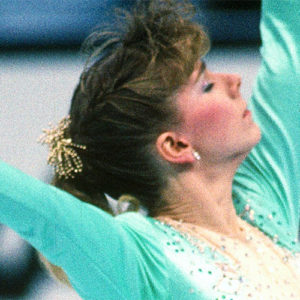 A couple of years back, a dear friend gave me a Tonya Harding sweatshirt. The gift was not an arbitrary garment. It had been...
© LitHub
Back to top