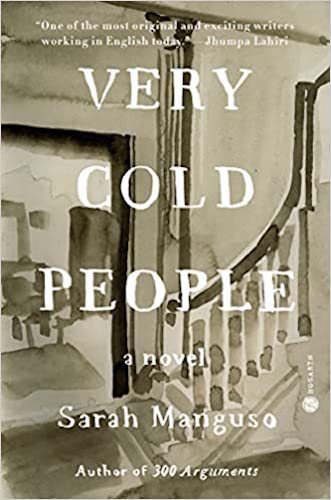 The following is excerpted from Sarah Manguso's novel, Very Cold People. Manguso is the author of eight books. She is the recipient of a Guggenheim Fellowship, a Hodder Fellowship, and the Rome Prize. Her work is regularly featured across The New York Times Magazine, O: The Oprah Magazine, and The New Yorker, among others. She grew up in Massachusetts and now lives in Los Angeles. Very Cold People is her first novel.

When I was old enough to read and write, I started writing a musical. I thought of a sad princess, the depthless sky mirroring her loneliness. When a fairy asked the princess what she wanted, the princess sang a song about wanting a husband. I called the play The Sebastian Princess and hid the notebook under my bed.

She just wants a husband, my mother said to me after finding my little notebook, as if disappointed there hadn’t been more to the story, as if I had written it for her, to her, and placed the notebook in her hands.

I often took naps on my father’s side of the bed, falling asleep inhaling his scent from the yellowing foam pillow. In the evenings I crawled between my parents to lean against the heavy wooden headboard that I called a bedboard. My father often said, The bed is not a playpen! angrily, if I brought a book to read in the big bed, next to my mother. She never said anything.

Often I would wake in the night to the sound of the headboard banging against the wall, and call out to my parents to stop. I imagined them flopping their big bodies around in the hot air, on a summer night, watching television, trying to get comfortable. I was annoyed that they were so clumsy about it.

That summer we stayed in a sunny room in a rented condominium on the Cape. My parents slept in one double bed and I slept in the other one, two feet away.

My mother’s legs splayed out in a V under the covers. She wore cheap shiny nightgowns that poorly concealed her lumpy body. She loved to lift the nightgown high up over her thighs, showing off the blue and red veins. I begged her to cover herself. She said, You’re such a prude!

I woke up one morning to my parents whispering. It was hot, and we had all kicked the covers off. My father was on his back and my mother was sitting next to him, her back against the headboard.

My father was lying quite still, but in the middle of his pale blue pajamas was a wriggling, as if a little animal needed to get out. Inside his pants his penis rose and fell, shuddering as it moved. Then my mother swung her legs over the side of the bed and leaned back so that she lay over the middle of my father and her back concealed his naughty penis.

On hot days my mother took us to her parents’ apartment complex, where there was a pool. My grandfather was always there, waiting in a short chair, reading. Every now and then he’d lift himself up from the chair slowly, like an elephant, though he was bony and stooped, not elephantine. He walked slowly down the steps of the pool on his hammertoes and submerged. Then he went back to his chair and picked his book back up. He must have watched me swim, but I never paid attention.

Sometimes my mother and I went up to her parents’ apartment afterward. They kept a glass jar filled with jelly beans, and I was allowed to have as many as I wanted.

My grandmother was usually there, in the apartment, walking slowly and dreamily from room to room, her slippers scuffing along the creaky parquet floor. She carried handfuls of jelly beans and put them carelessly into her mouth, all at once. Imagining the apricot and mint and coffee flavors all mixed up made me cringe.

If my grandmother came down to the pool, she walked the same slow, uncertain walk, and sat on a long chair and rubbed bright orange lotion, squeezed from a metal tube, into her arms and legs. It smelled like cake batter.

Once, at home, I ran around the backyard while my mother sprayed me with the garden hose. I laughed so hard I thought I might burst. Many times after that I asked my mother to spray me with the hose again, but she always said no. She didn’t say it angrily or impatiently; she said it dreamily, as if she were under a spell that prevented her from causing such dangerous delight. I thought that maybe it was wrong to be that loudly happy, and that she was trying to protect me.

One night we all went to the movies. My mother bought a box of candy and a cup of popcorn and nothing to drink. She opened the candy and threw the plastic wrapper on the floor of the theater. I picked it up. She looked at me as if I’d just done something stupid.

She put the popcorn cup on the floor between her feet and leaned back in her chair and held on to the insides of her ripply thighs, her fingers reaching down and around them. Every few moments, one of her hands twitched. She closed her eyes halfway and rubbed her tongue all around her teeth. One of her knees rested softly next to mine.

When the movie was over, she kicked her popcorn cup under the chair in front of her.

On the way home I learned that we had left the house only because my mother had decided not to attend our neighbors’ Christmas party. She’d thought that they would notice our car was gone.

I don’t remember anything about the movie.

At recess that day I had jumped rope with the other girls. I was thinking about the rope held at both ends by two girls who gaily threw it over my head when it was my turn to jump, the rhymes we chanted, the coats we wore, our rubber boots marked with salt from the icy sidewalks. Sometimes I took a crunchy walk home from school over gray ice, and at an intersection, at a blocked gutter, I stepped onto the ice and it would be a slush puddle a foot deep and evilly cold.

One afternoon the brook path was iced over. I fell flat on my back and couldn’t stand up again and crawled up to the street and walked down the middle of the street to the market and put a dime in a pay phone and called my mother. Or maybe I didn’t have a dime and called collect. She screamed at me and said that she had never gotten a ride home from school. But she had grown up in the city, where the sidewalks were shoveled. I crawled and tiptoed home.

It was almost my birthday. My mother bought me a sateen slip dotted with little pink and red hearts, and at my birthday party I wore it under my skirt. I also got a new flannel nightgown. Under the covers it released sparks, a cold little fireworks show.

That year my birthday party was a few days after a historic blizzard. Driving was still banned, so my father walked to the store and bought a cake and dragged it home on my sled. My friends walked over with their grateful, snowed-in parents. My mother helped us make construction-paper crowns, which we all wore.

In a photograph from that day, I’m standing next to a pile left by the town plows, and it’s more than twice my height.

Wearing a warm coat over my Brownie uniform, I stood at evergreen-draped doors and asked people to sign my card and pledge two dollars for a box of Thin Mints or Trefoils. I’d deliver the cookies later in the season, when there was still enough snow on the ground that I’d need to wear plastic produce bags in my boots, over my socks. Even then, sometimes I got a chilblain that stayed hot and red for the rest of the day.

After a few houses the ballpoint pen started to skip and trail dark blue blobs. After the ink in the reservoir froze solid, someone gave me a pencil, and I kept going.

The school flooded the playing fields after Halloween and the water froze into an ice rink. One year I fell on the field and knocked out a tooth.

A two-story mass of plowed snow stood in the far end of the schoolyard. We dug slides and caverns and stairs, little hollows to store things, sticks and icicles and snowballs that melted and refroze. Our hands were pink and wet and red. On our side of the snow mass we had a password to enter, S and P, snow and plaster, and a hand gesture that went with it.

When the duck pond froze, the geese came and got in line like children and took turns sliding on a spot they’d melted slick with their warm blubbery bottoms.

One day, after a fresh snow, I lay supine on the snow-bedded picnic table and stared up into the black branches high above me, the sky blue and white beyond that. It was so quiet; the snow muffled the little sounds of the neighborhood. What are you doing! my mother screamed out the kitchen window. I extracted myself from the me-shaped hole, my cold, clean, aboveground grave.

The salted snow left white lines on the flagstones, and even if you poured hot water over them and scrubbed, as my mother did each spring, those ghosts of winter never quite disappeared.

On the 1863 novel that predicted the Internet, cars, skyscrapers, and electronic dance music. 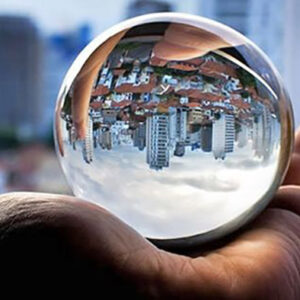 On the 1863 novel that predicted the Internet, cars, skyscrapers, and electronic dance music. Today we’re celebrating the 194th birthday of Jules Verne—novelist, poet, playwright, and, as it turns out, seer. Often...
© LitHub
Back to top