Veronica Esposito on the Book That Changed Her Life

On Trauma and Recovery, Therapy, and Writing as a Tool for Healing

There are clothes I buy aspirationally, not the sort of garments I know I’d feel at home in but rather pieces that are a proposition, a challenge, a question, Can I wear that? They produce a delicious sense of unease, which only serves to heighten my attraction to them, because I know they have the potential to take me somewhere. Maybe somewhere good, maybe somewhere bad. I don’t know yet. I have to try them out to see if they’ll make me into the kind of person who wears these clothes—and if I’ll like being that woman.

Just bringing these objects into my home, seeing them lined up in row after row on my bookshelves, carrying them with me as I made my way through each day, setting them onto my nightstand before I went to sleep—through their presence alone, these books began exerting their pressure onto me. There they sat, like personal fortunes whose contents I was so eager to know.

And then one afternoon in the Strand Book Store in New York City, I found a book that radiated that familiar sense of potential, and I knew I had to own it. I was finishing up in the basement after browsing for a lengthy and meticulous period, dodging through patrons as I moved from book table to book table, my body weary from a long day walking around Manhattan, when I saw a title that cut through my late afternoon lethargy.

Trauma and Recovery. I had never heard of it, and in those days I rarely read works of psychology, but something about those words and the startling cover art made me want to own it. I began to wonder, What if I’m the sort of person who likes reading books about psychology? It seemed like a reach. Something about the idea even felt vaguely off-putting, but I knew that the die had been cast the minute I’d picked the book up and looked it over. I was about to purchase half a dozen books, and I knew that I wanted to buy this one the most.

Since that afternoon nearly three years ago, I have wondered just how I knew this book was for me. On the day that I bought it, I looked like a man wearing lilac nail polish and skin-tight women’s jeans, and carrying a smooth leather bucket bag. I thought of myself as a writer with a day job in publishing, and I thought this was who I’d probably be for the rest of my life. On that day I did not know that I carried decades of trauma that had shaped my life’s possibilities. I did not know I had anything to recover from, and that this process of recovery would transform me.

Two years after that afternoon, I looked like a woman in a flower print skirt and a silk tank top, a dazzling obsidian manicure on her fingernails, carrying a smart, svelte purse. I was a woman nervously attending her first graduate class toward becoming a therapist. Among other things, this was where the work of healing from that trauma had taken me.

Sometimes when I look back at this transformation, I search for those little tendrils of potential that began drawing me toward my future. I wonder about how I became aware of things that I had remained carefully unaware of for decades. About how anyone starts to see what they can’t see. Something deep within me is so eager to know how those little bits of luck, intuition, coincidence, or destiny opened up this life for me. Why did I feel Trauma and Recovery sing out to me in the bookstore that day? How much I know about where I was headed when I picked this book up and felt some inkling that it could be a book about myself?

When it was released in 1992, Trauma and Recovery was instantly hailed as a landmark, a classic that would forever change our understanding of trauma’s effects on the mind and body. The New York Times review, written by the venerated feminist psychologist Phyllis Chesler, opened by flatly declaring it, “one of the most important psychiatric works to be published since Freud.”

I could not hope to understand my childhood until I started out by claiming my ownership over it.

A deeply feminist work, it was one of the first books to discuss the largely unseen epidemic of rape being perpetrated upon women, and the lasting deleterious effects that sexual abuse had on their mental health. It also popularized the notion of complex PTSD, which states that post-traumatic stress can be much worse when an individual is subjected to repeated stressors over a prolonged period of time, as an in abusive childhood, or while living through the daily microaggressions of sexism. Although the book is rigorous and intellectually deep, it is also written in clear, graceful prose that makes its necessary subjects accessible to anybody.

The parts that most struck me, and which I remember best now, came when Herman described the effects of trauma on the psyche, and the subtle, normalized ways it can be instilled into children in seemingly safe households. I read her description of how caregivers can isolate, bully, and control children while maintaining a veneer of love, and I felt an understanding creep over me, even as I distanced myself from the possibility. I read this book strangely, both wanting to see myself in these pages and also unable to believe these thoughts.

It fills me with relief to think that in the years since I read that book I found the courage to state that I saw myself in it. I could not hope to understand my childhood until I started out by claiming my ownership over it, and this was most necessary because understanding is an essential part of recovery. As Herman herself writes, when we come to understand our trauma “survivors become comprehensible to ourselves,” and this is the beginning of healing. We no longer see the effects of our trauma as “inherent defects” but as the result of an abusive environment. We can begin to separate ourselves from the malicious thoughts that have been instilled into us.

These first steps led to more steps, which led to other things, which themselves opened into more new directions, until I eventually had a new life for myself. The spring after I purchased Trauma and Recovery I began taking estrogen and identifying socially as a woman. I changed my legal name and gender, updated my documentation. I started doing things I’d wanted to do for my whole life. One of these was to begin seeing a therapist. I quickly saw how much inside of me had been waiting for this moment, that for years in late-night, half-drunk conversations in the dark corners of bars I had been seeking out a therapeutic context to process what had been done to me. In some unreasonably self-sufficient, shame-covered way, those had been attempts to do the work of healing that could be done much better in a therapist’s office.

Eventually I decided to leave behind the publishing world that had been a home for my full adult life, and I began working in peer support to heal other transpeople. This is work that I love, that feels more meaningful and connecting than anything I have ever done before. It is also work that intersects with what I’m learning in therapy and in graduate school. Through this process of growth, new values have germinated in me, a new approach to life that felt so much truer than the one I was letting go of. It was as a part of this healing that I felt the call to become a therapist. I didn’t just want to enter into this context for one hour per week, I wanted it to be something so much larger and encompassing.

This is what I am doing right now, working toward my degree, continuing to learn and grow in peer support and school and therapy, continuing the process of healing. As a part of this process, I have thought hard about what no longer serves me and should be left behind, and what I want to carry along with me toward my future. In particular, I have examined my writing practice. Is there still space for writing in my life?, I’ve wondered. Or should I let it go? When I think of the impact Trauma and Recovery made on my journey, I know that writing can be a part of healing, and I believe that perhaps my writing can now serve this purpose. I’ve seen new things filtering into my recent essays, new values and ideas and contexts, as well as a new kind of language that feels softer and more pliant than one I once produced. It feels exciting to imagine what might happen as I allow my current work a more conscious and purposeful space in the things I write. I feel excitement, curiosity, and potential, as well as a little nervous energy, at the size and mystery of this future. I now recognize those as good feelings, emotions that betoken promising things to come. 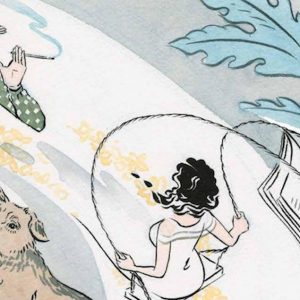