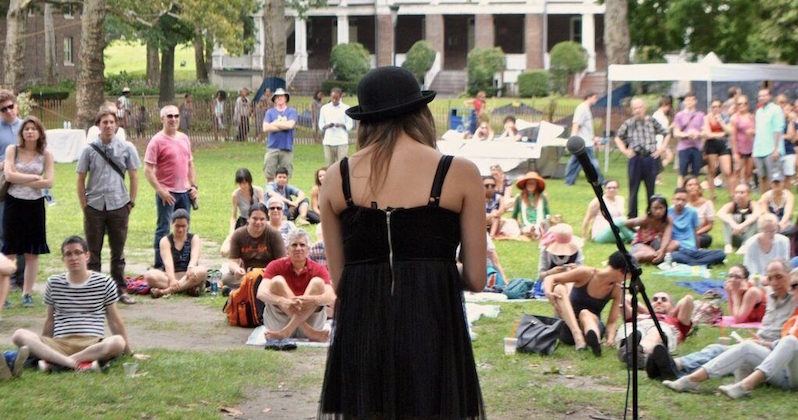 Urgency and Inspiration at the 2019 New York City Poetry Festival

On Governor's Island, Poetry is Alive and It Is For Everyone

There’s a spot on Governor’s Island where, if I stand still, I can hear two poems at the same time. It’s at an intersection on Colonel’s Row, a street lined with Victorian houses that feels disarmingly outside of time. It’s the last Sunday in July, and the temperature lingers just under 90 degrees. Thankfully, the trees here are old enough that they cast shade over the entire lawn. It’s a little cooler under their canopies, but not by much.

Despite the heat, hundreds of people waited in long lines in Brooklyn and Manhattan this morning to board ferries that shuttled them across New York harbor. We’ve all converged on the island for a day of celebrating poetry at the ninth annual New York City Poetry Festival. The lawn is covered with tables from poetry organizations and publishers. There are books and merchandise for sale, a beer garden with rosé and Brooklyn ale, and food trucks with lobster rolls and Lebanese cuisine.

Lining the outer edge of the lawn are four stages. Each one contains a poet. Where I stand now, I can hear a woman on my left recite a poem about superheroes while the one on my right reads from her phone about the violence society inflicts on women’s bodies. The stages are open air, and on this breezeless afternoon, their sound carries and mingles together. Snippets of verse intersect and overlap, creating a pleasing fusion of words.

The festival is a free two-day event held every year on the last weekend of July. It’s the only festival in the city devoted solely to an art form that, for many, remains mystifying and unreachable.

“Rising poetry sales are a sign that people need poetry’s healing power now more than ever.”

“I’ve always felt like people’s perception of poetry is so skewed,” says Lynn Melnick, one of this year’s headlining poets. Later that day, she and I sit under the Poetry Society’s membership tent, where she’s enjoying VIP access to a misting fan before going on stage. “I think a lot of this is because of how it’s taught in school, I really do. People think it’s just a couple of old white men writing rhyming poems that they’re told they don’t understand and have to solve, like a riddle.” But Melnick cites rising poetry sales in our era of political stratification as a sign that people need poetry’s healing power now more than ever.

It’s a power that Melnick has been keenly aware of for most of her life. She tells me that ever since she was a teenager, poetry allowed her to share intimate details about her life in a way she never could otherwise. “I have things in my poems now that are super personal and intimate, that I would never just tell you here, sitting across from you,” she says. “But if I could use language to sort of manipulate the feeling and the experience, it feels more comfortable and heightened, and true somehow, but less scary.”

Melnick has read at the festival many times, but this is her first year as a headliner. This year, she’s sharing poems from her book Landscape with Sex and Violence, published in 2017, as well as a few from a new manuscript she’s been working on. She says she keeps coming back because of the way the festival connects more readers with poetry, showing them that it’s accessible to all.

“Events like this take poetry out of that rarified air,” she says. “You don’t have to go to the fancy bookstore, or to the university reading. You don’t have to take a class. Here, poetry is alive, it’s around us, it’s being written and read and spoken by people who aren’t old white men and those who would read them. It’s for everyone.”

The festival started back in 2011 when Stephanie Berger, CEO of the Poetry Society of New York, put it on with her co-collaborator Nicholas Adamski. “The goal of the festival is to try to bring the entire poetry community of New York City and the surrounding areas together,” Berger tells me over the phone a few days before the festival kicks off. “Poetry tends to be hidden in the world, in the corners of bookstores and coffee shops and universities, and a lot of people don’t even really know it’s out there for them.”

The first year, they drew less than 1,000 attendees. “We threw our first event together in a little under three months, so obviously it wasn’t on the scale that it is now,” Berger says. But since then, they’ve witnessed explosive growth. Every year for the last three years, between 10,000-14,000 people have attended the festival over the course of the weekend.

Berger attributes part of this success to the growing popularity of Governor’s Island itself. A former military outpost, the 172-acre island has slowly transformed in recent years into a massive public park. Accessible only by ferry, the island is a car-free haven. It opens each summer and fall, providing New Yorkers a nice change of pace from huge crowds, snarled traffic, and screeching subway lines.

“Governor’s Island is really, really special, particularly in New York City,” says Berger. “There are so few places that are really green and sprawling. It’s a really special place, and a really perfect venue for the kind of event that we’re trying to create, which is all about fostering community and creating a space where the general public can access poetry.”

Each year at the festival, more than half of the organizations or readers participating are brand-new to the event. “At a lot of poetry festivals, it’s the poets who have published books on the bigger presses that year, who’ve won awards, who are teaching at universities—people with a really established presence,” Berger says. “At our festival, we invite organizations of all shapes and sizes and formats to submit an application to host a reading.”

The selection process is simple. As long as an organization submits a completed application on time, they are awarded 30 minutes on stage. This allows for a huge breadth of poetry lovers to share their art, from high school slam teams to senior citizen center writing groups. While there, I witnessed a solo beatbox artist follow students from the NYU MFA program reading poems in Spanish.

But my favorite moment of the day happened earlier, just after I arrived. I was wandering the festival and came upon the “Ring of Daises” open mic, which allows anyone to sign up and read their poetry.

The host called out a name, and a girl no older than 15 stood up with a folder clutched to her chest. She stepped onto the stage shaky, but determined. She took a huge breath before stepping up to the microphone. “This is my first time reading in front of people, and I’m a little nervous,” she says. The crowd cheered her on with some applause. The girl fumbled a bit through her folder before finding the poem she wanted to start with.

She took another huge breath. Then she stepped up to the microphone and started reading.

And just like that, another poet is introduced to the world.

Next year’s poetry festival will be July 25 and 26, 2020, on Governor’s Island. You can find out more about Lynn Melnick and Stephanie Berger on their websites.

Showing Toni Morrison what Beloved meant to me took 20 years. 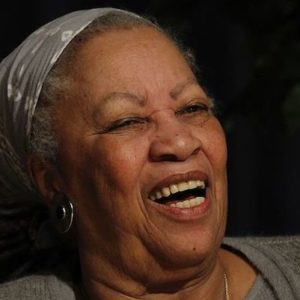 Showing Toni Morrison what Beloved meant to me took 20 years.

The first time I ever encountered Toni Morrison in person was at a reading at The Riverside Church in Harlem, in the mid-1990s,...
© LitHub
Back to top