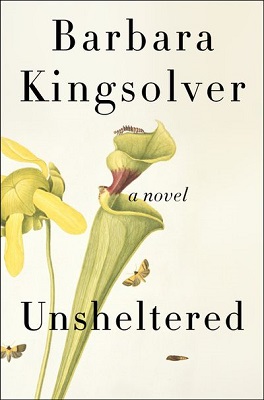 The following is from Barbara Kingsolver's novel, Unsheltered. Unsheltered is the story of two families, in two centuries, navigating what seems to be the end of the world as they know it. Barbara Kingsolver is the author of several books, including The Poisonwood Bible, Flight Behavior, and Lacuna. Her honors include the National Humanities Medal, the Dayton Literary Peace Prize, and the Orange Prize.

Willa spent a restless hour walking around the empty third floor trying to choose a room for her office. After a month in the house she’d gotten things decently organized downstairs but had made no inroads on the top story except for the room she’d nominated as an attic. Alongside the antique crib she’d stashed the usual junk, holiday decorations, underemployed sports equipment, plus boxes of the kids’ keepsakes stretching from preschool finger paintings to Tig’s wacked-out science fair posters and Zeke’s high school yearbooks signed by all the girls who’d found him 2 cute 2 b 4gotten. Willa now recalled the contractor’s reason for stepping behind the stuff: To inspect ruptured ductwork? Christ. It sounded like an aneurism. What shook her was his cheerful demeanor as he delivered the awful prognosis. Exactly like her mother’s last oncologist. To steer out of a tailspin she staked her claim on the room that looked down on the automotive neighbors. A view to avoid, some might say, but the leafy afternoon light through the giant beech was gorgeous. And the hardwood floor was in pretty good shape except for the scarred, grayish path that ran the circuit of the four connected third-floor rooms. She remembered Zeke and Tig and one of their now-dead dogs chasing each other through a circular floor plan like this in one of their homes. Which one? Boulder, she thought, recalling mountains out the kitchen window. Hills to which she’d craved to flee, stuck at home with two preschoolers while Iano laboriously blew his first shot at tenure.

These top-floor rooms heated up like a furnace. All the windows in the house reached from floor to ceiling, and most so far had proved unopenable. She leveled a couple of kicks at a frame before giving up, then sat on the floor and unpacked a box of her books into categorical piles. Then angrily repacked them. Nesting was ludicrous, given the doomed state of the nest. She closed her eyes and leaned back against the wall, feeling the rhythmic thrum of Nick’s oxygen compressor on the first floor. Lest she ever relax into solitude, the miasma of her father-in-law and his life support suffused the household. She wished Iano were home. Classes didn’t begin for several weeks but already he had pressing duties galore at his new office.

The word office plucked a pang of nostalgia in her chest. Given her age and profession—midfifties, journalist—she might never again have a working life with colleagues, office gossip, and a regular incentive to get out of sweatpants. The remainder of her productive life revoked overnight felt like an amputation. In her last years at the magazine she was telecommuting more than not, but still the regular drives to the main office on the outskirts of DC had consumed so much life force she’d started envying her friends who were going freelance. Of this envy Willa was cured in no time flat. Now she understood an office had made her official. Her whole career was thrown into doubt retroactively. Did a professional wake up one day with no profession? For sanity’s sake she needed to send out some freelance proposals, and step one was to claim a room of her own. Now even that simple project was tainted with calamity.

She lay on the floor and stared at the concentric brown stains on the ceiling. Iano had proposed they paint over the stain and forget it, because he was Iano. Willa had felt that if timbers up there were leaking their dark fluids, the trouble must run deep enough to warrant calling a contractor. Some tin would need patching, maybe they’d find rot in the roof beams. But the whole house a shambles?

The shock settled on Willa as a personal failure. As if she’d invited the disaster by failing to see it coming.

“She remembered Zeke and Tig and one of their now-dead dogs chasing each other through a circular floor plan like this in one of their homes. Which one? Boulder, she thought, recalling mountains out the kitchen window. Hills to which she’d craved to flee, stuck at home with two preschoolers while Iano laboriously blew his first shot at tenure.”

She forced herself up and went downstairs, rousing Dixie from her nap on the front hall rug, clipping on her leash and urging her out the door for a walk. Dixie, with the help of expensive doggie Prozac, had conquered a lifelong terror of car travel and coped with the move from Virginia, but now wanted to spend her remaining days sleeping off the dismay. Willa saw the merits of that program.

“Easy does it,” she coached, wondering what Dixie’s old eyes were making of these Vineland sidewalks that were broken everywhere, heaved up by the bunions of giant old trees. Every street offered a similar view of oak and maple trunks lined up like columns of the Parthenon. The contractor’s utopia story made sense insofar as these trees suggested some thorough city planning over a century ago. She passed in front of the neighbor’s house with
its generous corner lot fully planted in autos, then turned south on Sixth and made tedious progress as Dixie inspected every tree trunk. The dog was finicky about emptying her bladder but eager to sniff out the local news, seeming to think it differed from yesterday’s. Like the elderly Vinelanders Willa saw in diner booths poring over the town’s weekly, as if something might have happened here since the last issue.

She crossed Landis Avenue, a bizarrely supersize main street, the width of a four-lane freeway at least. Iano had posed various entertaining theories, but the truth turned out to be mundane: Land Baron Landis had laid out a namesake street to match his ego. He might as well have paved the place in gold. He should see his dying little burg now, with its main drag so deserted Willa felt safe taking out her phone to check the time as she and her legally
blind dog casually jaywalked.

She wanted to call Iano with the new installment of their family disaster so he could share her sensation of drowning. But he would be on his way home by now, and Iano was a highly distractible driver. Really it was her mother she’d wanted to call right after the bad news, or in the middle of it, while Mr. Petrofaccio was blowing his nose. First thing in the morning, last thing at night, whenever a fight with Tig left her in pieces, it had been her mother who put
Willa back together. When someone mattered like that, you didn’t lose her at death. You lost her as you kept living.

Willa and Dixie passed a pawn shop, the welfare office, a Thai restaurant, and the Number One Chinese Market before heading south again. After five leafy residential blocks, at the corner of Eighth and Quince, Dixie finally elected to pee on the foot of a maple. Most of the houses on this block dated from about the same Victorian era, variously run-down, two for sale. And sure enough, she spotted two garage-like buildings in the backyards,
identical in design, disguised by years of divergent use: one sheltered a Honda sedan; the other was an epic man cave covered with old license plates. She pressed her brain for a second to recall the word, then got it: stip. Stipulation houses. Quickie predecessors of the more carefully constructed mansions that were now coming due for collapse.

“She wanted to call Iano with the new installment of their family disaster so he could share her sensation of drowning. But he would be on his way home by now, and Iano was a highly distractible driver.”

Dixie waddled homeward and Willa followed, feeling the word shambles in her sternum. How could two hardworking people do everything right in life and arrive in their fifties essentially destitute? She felt angry at Iano for some infraction that wouldn’t hold up to scrutiny, she knew. His serial failures at job security? Not his fault. Plenty of academics spent their careers chasing tenure from city to town. They were a new class of educated nomads, raising
kids with no real answer to the question of where they’d grown up. In provisional homes one after another, with parents who worked ridiculous hours, that’s where. Doing homework in a hallway outside a faculty meeting. Playing tag with the offspring of physicists and art historians on some dean’s lawn while the adults swigged cheap Chablis and exchanged companionable gripes about their department heads. Now, without complaint, Iano had taken a teaching position that was an insult to someone with his credentials. As the family’s sole surviving breadwinner, he should get a pass on the charge of being unfit to take a tough phone call while driving.

It never mattered before. Having a mother to shore up Willa had always left Iano free to be the fun, sexy one who didn’t worry even about death or taxes, who brought her flowers picked from other peoples’ yards, who once threw her pain-inflicting shoes out the car window on the way to a formal reception at the provost’s. She couldn’t expect him to be a new kind of person now. She was the crisis handler, he was the evader. Marriages tended to harden like arteries, and she and Iano were more than thirty years into this one. This evening he would come in the door like a blast of warm weather, give her a kiss in the kitchen before changing out of his office clothes, and they’d have no chance to talk before dinner.

So she would drop this bomb on everybody at once. They were all adults, entitled to share her concern about a house falling down on them. Old Nick with his oxygen tank and rabid contempt for the welfare state would be especially vulnerable to the challenges of homelessness. On the other hand, Tig might light a bonfire and dance in the yard as the bricks rained down. Willa had tried and failed to track her daughter’s moral path, but collapse of some permanent structure always seemed to be part of the territory.

From Unsheltered. Used with permission of HarperCollins. Copyright © 2018 by Barbara Kingsolver. 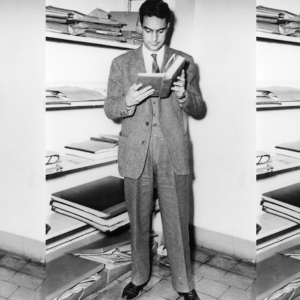