Unlearnable Lessons on My Father’s Deathbed

I was at my father’s side much of the time in his final weeks, a witness to both the gifts and miseries of being near death. Nurses came and went, patient, long-suffering. They sat beside him for hours at a time, dousing spongy lollipops in water and then rolling the wet and heavy heads over his parched lips so he might receive a scant few drops. They held my father’s hand when he raved, the victim of morphine-induced hallucinations, and changed the dressings on his ulcerated legs. Oh, those legs. They were truly painful to behold: matchstick thin, purple, the skin cracked—and no good for walking, though he didn’t always understand that. Once, he beckoned me over in a state of alarm, signaling with a bony finger for me to lean in. I put my ear to his mouth. “Someone’s broken my legs,” he said, the urgent words slipping and gurgling over the water in his lungs. “Help me.”

There’s a famous line from a Basil Bunting poem that says, “It is easier to die than to remember.” No matter the care and precision with which the stonemason in Bunting’s poem wields his mallet and chisel, his marks are destined for erasure: “Name and date / split in soft slate / a few months obliterate.”

The lines came to me in those awful weeks when I realized just how bloody hard it is to die. The body will not be easily stilled; its pumps and circuits and muscles and pulleys resist shutdown. How a body as incapacitated as my father’s managed to fight back with such punch astounded me. It is a lesson I will not soon forget.

Remembering, by contrast, was like a subterranean lake of crude that had just been struck by a Texan drill: it spurted out forcefully, unstoppable, and at all hours, day or night. My father’s childhood, in particular, came back to him in vivid scenes, like a streaming video projected across the drawn curtains at the far end of the room. Across the velvety folds he saw himself, a boy in shorts, at the family house—vast, lime-washed—in colonial Rangoon, skating over polished hardwood floors in his stockinged feet. A miniature Fred Astaire. Or he watched himself tour the garden’s grassy groves, loitering, idling, waiting for curious insects on leaves to take flight, or for swans to push off from the end of the huge pond that his Iraqi Jewish father had built at the bottom of his wannabe-English lawn.

At night my father remembered the dead. They came to him in his dreams, pleading; his mother wrapped in her shawl, wringing her hands, his grandparents smiling and nodding. He must come, they said. He must join them. Bathed in the hazy glow of fond remembrance—warm, inviting—they’d entreat him, and my father would be seductively drawn in. He’d feel his spirit keening, his heart longing, his whole being forgetful of where it belonged, wanting to respond, only for him to awaken suddenly, shaken by an eleventh-hour horror of what actually heeding those ghostly callings might mean.

It puzzled me then and it puzzles me now, but right until the end he did not want to go. Bedridden, acutely dehydrated, barely able to move except for a bothersome agitation in his hands, pumped with sedatives, his breathing aided by oxygen, his bowels emptied into disposable paper pants, he clung determinedly on. Much of the time he was delirious, and he could not sleep for feverish dreams. He vomited in reaction to his meds and railed against the unfairness of it all. But still he would not countenance a final departure.

At first I put this inability to let go down to his having unfinished business to attend to (he wanted to see loved ones one last time, and to set his mind at ease about my mother’s welfare). I assumed, wrongly, that he entertained ideas about a “good death.” To my mind, the tableau before me resembled a medieval painting in which the viewer was meant to read a parable of just that: an old man reclining on his deathbed, his body wasted, yet lavishly robed, and a long file of well-wishers in attendance, come to say their respectful good-byes.

I remember thinking at the time that my father was never more dignified than when he lay dying. Reanimated by the attentions of loved ones, he managed to prize open a tiny chink in the gloaming through which the last of the sun’s rays might shine: he would blow a kiss at a grandchild or squeeze the hand of a relative in confidence. Occasionally he succeeded in smiling a crooked smile, defying the slack-jawed myopathy that afflicts the dying, when the mouth forms itself into the dreaded Q-shape that doctors know as a sign of approaching death.

We, the women of the family, in a family of women, fluttered about, bringing before him grandchildren, brothers, equally aged school friends, sons-in-law, cousins; like magicians pulling rabbits out of hats, we were eager to please. We stroked his hair and stilled his fretful hands, and we reminded him of good times. When he thanked me for these stringlike runs of small ministrations—“You are a lovely person,” he said—tears sprang from my eyes like water jets. It was the first time in my life he had ever expressed such gratitude.

His unfinished business done, however, my father panicked. There was nothing left he could think of to do—and nothing to divert him from the knowledge of how little he actually could do. Only later would I allow the suspicion to form that my father’s terror of dying had its origins elsewhere, and that the ars moriendi was of no metaphysical concern to him. For though an octogenarian on the outside, inside he was still a child.

Once this notion took hold, it stuck. I knew its rightness in my bones. In spite of appearances, my father had never grown up. He was the puer aeternus, the eternal boy, who, in the scheme of emotional development outlined by Carl Jung, forever identified with the pristine, omnipotent, infinitely possible self that characterizes the childhood ego. That self had remained intact through any number of disappointments, bereavements, and geographical relocations, not to mention marriage, fatherhood, and the unarguable signs of aging. At 87, my father was still a boy in shorts, skipping around the garden. He was monarchic, demanding and filled with utterly impractical heroic intentions: “I am thinking of going to the south of France for a few days, just to see the sun,” he announced one day; he was 84 at the time and shortly to become the dependent owner of a walking frame.

To all intents and purposes my father’s long life resembled a closed loop: he went only so far along life’s road and then, developmentally speaking, he retraced the path back to source. Put another way, he spent the second half of his life future-proofing himself, squandering its opportunities for reflection and learning, and with that its opportunities for novelty, joy, and surprise.

At one level, I sympathize with his rage against time’s maddening shortness. A middle-aged woman, I’ve begun to experience the accelerating years myself: there is the evidence in the mirror, startling and nonnegotiable. But I’ve become acquainted with an everyday acceleration as well, the way successive nights and weeks and months seem to tailgate one another with increasing insistence, like the turning pages of a book of animation: flip, flip, flip, flip, flip, flip. And there I am, a line figure kicked from page to page, tripping up over myself, barely able to take stock of my surroundings before being kicked on toward the final scene, and my own all-too-human conclusion.

My father’s furious backpedaling, I now see, was the best he could do with limited tools. Then again, if time’s trickery is a matter of degree, with increasing age winding up the torque, then perhaps by the time you get to 87 you can only wonder at how entire decades are crunched down, or forcibly compacted, the way bodies of cars are reduced to dense cubes of metal with no beginning or end; or with beginning and end welded together into a state that defies any narrative extension.

Marina Benjamin is the author of three previous memoirs, Rocket Dreams, short-listed for the Eugene Emme Award, Last Days in Babylon, long-listed for the Wingate Prize, and The Middlepause, finalist for the Arts Foundation's Creative Nonfiction Award. She lives in London and is currently a senior editor at the digital magazine Aeon. Her latest book, Insomnia, is available from Catapult.

Elif Batuman on Fictionalizing Her Life, and Learning to Fact Check 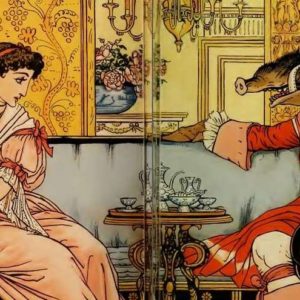 They may be ancient forms of storytelling, but fairy tales are still big business. Case in point: the new Disney live-action...
© LitHub
Back to top