From the Collection La rabbia/Anger

– Dreams of death
– Drivel of maggots in eternity
– Ah, children!
– The mothers were monsters.
– Slow fatalities coming to a head outside the world.
– The convolutions of a will
that makes of itself a monument on the summit of the Oceans.
Will that has no memories.

– There’s nothing left, there’s nothing, nothing.
We have never existed.
Reality is these shapes on the summit of the Heavens.

– Angry hissing of the defensive rich man.
– Cream of blood of the offensive poor man.

– Bourgeois brain devoid of the idea of class struggle!

– Heart benighted by the mystery of no idea of class struggle!

– Lids of the terror that rules the world, mange-ridden roses
of the war sown by class struggle. 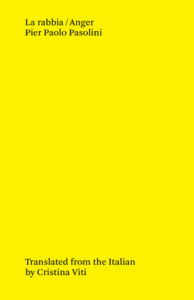 Pier Paolo Pasolini (1922–1975) was an Italian poet, novelist, journalist, filmmaker, theorist, and dramaturg. First and foremost a poet, he is a major figure in European literature and cinematic arts. Life in Rome during the 1950s furnished the material for his first two novels, Ragazzi di vita (The Ragazzi, 1955) and Una vita violenta (A Violent Life, 1959); works whose brutal reflections of urban poverty in the city were similar in character to the depictions of Rome in his debut film, Accattone (1961). All three works dealt with the lives of thieves, prostitutes, and other denizens of a Roman underworld. Other notable novels and narrative works in translation include the unfinished novel Petrolio (published in English in Ann Goldstein’s translation by Pantheon), a work-in-progress at the time of Pasolini’s death, and La lunga strada di sabbia (The Long Road of Sand), a facsimile of writings towards a travelogue initially published in the magazine Successo.
Cristina Viti is a translator and poet working with Italian, English and French. Her most recent publication was a co-translation of poems by Anna Gréki (The Streets of Algiers and Other Poems, Smokestack Books, 2020), and her translation of Elsa Morante’s The World Saved by Kids and Other Epics (Seagull Books, 2016) was shortlisted for the John Florio Prize. Previous publications include the Selected Works of Dino Campana (Survivors’ Press, 2006), including a full version of the ‘Orphic Songs,’ and excerpts from Carlo Emilio Gadda’s War & Prison Journals (in No Man’s Land, Serpent’s Tail, 2014). Other translations (including Amelia Rosselli, Clemente Rèbora) and/or Viti’s own poetry have been published in various reviews (including Shearsman Magazine, Agenda, The White Review, et cetera).
Share:

What’s So Bad About Melodrama? In Defense of Forgotten Classic Random Harvest 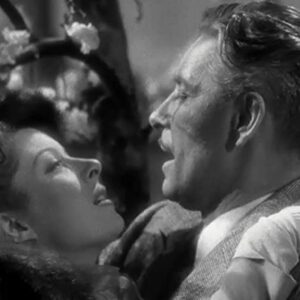 What’s So Bad About Melodrama? In Defense of Forgotten Classic Random Harvest "For sheer make-believe romance you cannot top James Hilton's Random Harvest," actress Greer Garson once said. "It was the happiest...
© LitHub
Back to top
Loading Comments...