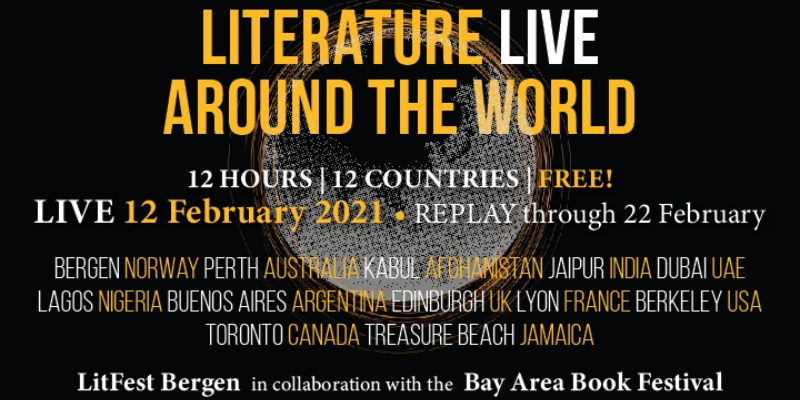 Tune in for Literature Live Around the World

A Free and Live Global Book Festival on February 12

Ever wondered what book-lovers like yourself are reading, and what writers are creating, in Afghanistan? Nigeria? Jamaica? Argentina?

Join us on Friday, February 12, for a virtual journey around the world as twelve literary festivals present a series of live virtual conversations, produced by Norway’s LitFestBergen. Throughout the day, there will be a different event each hour, starting in snowy Norway and ending at sunset on Treasure Beach in Jamaica.

The Bay Area Book Festival is proud to represent the U.S. and showcase what makes the Bay Area such a literary touchstone and international beacon. Their program will feature authors Dave Eggers, Vendela Vida, and Daniel Gumbiner.

Watch the livestream below, starting at 6 AM EST:

What is it? A free, 12-hour extravaganza of 12 literary festivals around the globe, produced by Norway’s LitFestBergen.

What will I see? Each literary festival will present its own program featuring local authors, as well as a dynamic video about each respective region and its literary and cultural scene.

How do I watch? The full program will run for all to watch for free, starting on February 12, 2021, at noon Norwegian time (yes, that’s 6 AM Eastern). Don’t want virtual jetlag? No worries: within 24 hours after the live program concludes, the recording of the entire event, featuring all 12 festivals, will be available https://www.baybookfest.org/bergen2021/schedule/here through Feb. 22. The recording will be “chaptered” so you can easily jump to the country you’d like to visit.

The full lineup is below. Times are in Eastern Standard Time.

From Norway: Rediscoveries in life and literature
Friday, February 12, 2021 | 6:00 AM – 6:59 AM
A true Bergener – both proud of and spiteful about his city – is author Tomas Espedal, who has written extensively about Bergen life and rain. Author Karl Ove Knausgård lived in Bergen for many years and will read from his latest novel Morgenstjernen (The Morning Star), which is partly set in the city. On stage are also Sámi author Kathrine Nedrejord and musician Sara Marielle Gaup. The Sámi, Norway’s indigenous population, were at one time forcibly assimilated into Norwegian life, language, culture and literature, but a new generation of them is no longer either ashamed or silent about their ancestry. Hosts are TV and radio journalists Siss Vik and Mona B Riise, who will also chat with festival director Teresa Grøtan about the Literature Live Around the World programme.

Live from Perth/Whadjuk Noongar Boodja
Friday, February 12, 2021 | 7:00 AM – 7:59 AM
The year 2020 has been a time of chaos and uncertainty. It began in Australia with raging wildfires and devastating floods. The pandemic followed. In this conversation with Gillian O’Shaughnessy, award-winning Noongar author Kim Scott reflects on what 2020 has meant to him, and why Aboriginal heritage and the natural environment need to be at the centre of national reconstruction. One Voice by Scott is published in Fire Flood Plague (2020), an anthology of essays by Australian writers edited by Sophie Cunningham. The event is hosted by Writing Western Australia, an organisation working between the lines and behind the scenes to build a state of opportunity in Western Australia for writers, publishers and other book industry practitioners.

Poetry from Kabul
Friday, February 12, 2021 | 8:00 AM – 8:59 AM
Directly from the Writer’s House in Kabul: meet poets, translators, visual artists and activists making a mark on their time and society. Participants Baktash Rawesh, Mujib Mehradad, Ramin Naqshbandi, Sajad Ahmad Shakeeb and Tamana Tawangar are all connected to PEN Afghanistan and the Writer’s House. PEN Afghanistan has published a large number of books in all the major Afghan languages and organised more than 800 literary and cultural events. These have significantly strengthened the path for introducing new poets and writers in Afghanistan. Joining the Kabul participants directly from the LLAW stage in Bergen is famous Afghan musician Hamid Sakhizada.

From India: The Edict Project: music and meaning for our times
Friday, February 12, 2021 | 9:00 AM – 9:59 AM
T M Krishna, public intellectual and acclaimed classical vocalist in the Carnatic tradition, is dedicated to working across the spectrum of music, society and culture. The Edict Project, in association with Ashoka University, is a creative collaboration which seeks musically to rediscover Emperor Ashoka’s ancient edicts – philosophies which speak of a more humane society built on empathy and compassion created during the period of the lockdown They convey Krishna’s conviction that the world can be healed through a deep understanding of music. He meets Manasi Subramaniamin for an inspirational multidisciplinary session which searches history and culture to frame words, music and meaning for our times.

From United Arab Emirates: Literary fiction – on the edge
Friday, February 12, 2021 | 10:00 AM – 10:59 AM
Cutting-edge literary fiction has been set alight this year with some extraordinary debut novels published by exciting young authors. Join two trailblazers whose uncompromising work has entranced readers, reviewers and prize judges. Delve into their roads to publication, the influences which shaped their books, and their exploration of childhood memory in creating powerful, groundbreaking fiction. Avni Doshi is a Dubai-based Indian American author whose debut novel Burnt Sugar was shortlisted for the 2020 Booker Prize. Derek Owusu is a British author of Ghanaian descent whose debut novel That Reminds Me won the Desmond Elliot Prize. The session will be moderated by Ahlam Bolooki, festival director of the Emirates Airline Festival of Literature.

Nigerian literature across generations
Friday, February 12, 2021 | 11:00 AM – 11:59 AM
Listen to Efe Paul Azino, one of Nigeria’s leading performance poets and the director of the Lagos International Poetry Festival. The poetry session is followed by a cross-generational conversation between authors Ayọbámi Adebayo and Mobolaji Adenubi. Using their novels as a reference point, the conversation will offer insights into the experience of Nigerian women who are unable to conceive or bear a child, and how society’s attitude towards them has changed. Their conversation is moderated by poet and linguist Kọ́lá Túbọ`sún.

Buenos Aires: personal journeys
Friday, February 12, 2021 | 12:00 PM – 12:59 PM
A traditional activity in the Festival Internacional de Literatura de Buenos Aires (Filba) is the personal journeys where geographical routes meet narrative ones. Argentine authors Mercedes Halfon, Mariano Quirós and Juan Ignacio Pisano have been invited to reflect on their daily or not so daily journeys – whether tied to their childhoods, their memories, or simply to a tour through the city which they enjoy – and to write about these. The aim is to avoid commonplace or stereotypical pathways, so that the truly personal arises. Each reading will be accompanied by a video of the journey. Attention will focus on three different neighbourhoods of Buenos Aires, as seen through the eyes of three young writers.

Scottish dispatches: the new generation
Friday, February 12, 2021 | 1:00 PM – 1:59 PM
This is a unique time to be thinking about and responding to Scottish identity, and the Edinburgh International Book Festival is proud to present an exciting selection of writers who are heralding a new generation of Scottish literature. In a series of readings and performances, Beldina Odenyo (Heir of the Cursed), Nadine Aisha Jassat, Leyla Josephine, Michael Pedersen, Courtney Stoddart and Roseanne Watt will reflect on their life and art, and what it means to be a young person living in Scotland today. New writing can depart from, build upon and reject what has come before, and these newly commissioned pieces – created especially for Literature Live Around the World – are dispatches from around the country which speak to Scotland now.

French women writers of today: feminism, identity and madness
Friday, February 12, 2021 | 2:00 PM – 2:59 PM
The Villa Gillet is France’s centre for international writers. It runs two international festivals each year – the Assises internationales du roman (Lyon’s international book festival) in May, and Mode d’Emploi (a festival of ideas and non-fiction) in November, as well as a large year-round outreach programme. This year, it is programming a strand on French women writers, whose texts tackle a diversity of issues including feminism, mental health and social norms. For Literature Live Around the World, Lucie Campos, director of the Villa Gillet, will be presenting a programme including three exciting women writers: Joy Sorman, Virginie Despentes and Fatima Daas. She will be leading a discussion from Lyon with Sorman about her new book A la folie (2021), followed by two readings of texts from the French feminist and writer Despentes and the young and talented feminist Daas by prominent French actresses Camelia Jordana and Anna Mouglalis. The text of the first reading was published in the wake of the #MeToo movement. The second is an excerpt from a debut novel dealing with lesbian, Muslim and feminist identities in the Parisian suburbs.

Books, magazines, and pirate stores: writing and activism in California and beyond
Friday, February 12, 2021 | 3:00 PM – 3:59 PM
From the Beat poets of the 1950s to Summer of Love musicians and Silicon Valley innovators, California’s San Francisco Bay Area is renowned for bold and often irreverent pioneers. The region’s contemporary literary scene is no exception. Once largely ignored by the East Coast establishment, California authors are now in the vanguard of the nation’s literature – radically shaping aesthetics and redefining who can be an author and what stories can be told. The two featured authors, Dave Eggers and Vendela Vida, are a married couple at the epicentre of this transformation. Their own award-winning literary work ranges from novels to memoirs, children’s books and screenplays, set all over the world. They have also built a thriving literary ecosystem which includes book imprints (such as the San Francisco-based McSweeney’s and its human-rights-focused Voices of Witness series), multiple magazines and journals (such as The Believer, which has also spawned a festival), and the hugely successful 826 National network (the largest youth writing network in the country). Join us to hear their inspiring story, to celebrate Vendela’s just-published sixth novel (We Run the Tides, set in San Francisco), and to discover just how a pirate store fits in. In conversation with their friend, colleague, and fellow author Daniel Gumbiner, and introduced by host Cherilyn Parsons, founder and executive director of the Bay Area Book Festival.

Soundtracks & Stanzas: Changing Canada’s Black Future
Friday, February 12, 2021 | 4:00 PM – 4:59 PM
Whether it be poetry written for the page, the silver screen, the poetry slam or the melody, every poet plays with language to reveal the inexpressible. The Toronto International Festival of Authors and JAYU present the new generation of Canadian poetry which is pushing the possibilities and playing with the rules. Tune into four distinguished Canadian poets who will take us on a journey through the physical, vocal and material elements of their poems. Featuring Jillian Christmas (Vancouver) Tawhida Tanya Evanson (Montreal), Jayda Marley (Toronto) and Motion (Toronto). Emcee for the evening is poet Britta B (Toronto).

From Jamaica: Fruishon
Friday, February 12, 2021 | 5:00 PM – 5:59 PM
When things come together so beautifully that one cannot imagine a world without it, a word adopted by Rastafarians wisdom speakers comes to mind, “fruition”, or better still, “fru-i-shon”. Calabash has become, by its existence and its persistence, exactly such a fruition – a project which has come to be the enactment of years of creative struggle, of apprenticeship, of labour and invention. Each of the writers celebrated in this event can speak to their emergence as voices carrying on the legacy of liberation, invention and imagination which has been at the core of the Jamaican character and spirit at its best. It is our delight to welcome you to just a hint of the bounty which is our fruition as a festival and as a nation. Meet Ann Margaret Lim, Opal Palmer Adisa, Tanya Shirley, Diana McCauley, Earl McKenzie, Millicent A A Graham, Mutabarika, Ella Brodber and Olive Senior.

The National Book Foundation has found its next Executive Director. 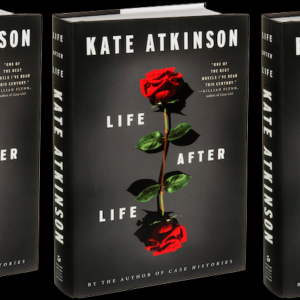