A New Poem by Brandon Som

One of my favorite images in all of contemporary fiction comes from Thomas Pynchon’s The Crying of Lot 49, when the landscape of urban Southern California is described as if an exposed transistor radio’s circuit board. Pynchon writes: “Though she knew even less about radios than about Southern Californians, there were to both outward patterns a hieroglyphic sense of concealed meaning, of an intent to communicate.” Som, the winner of the 2015 Kate Tufts Discovery Award for his collection The Tribute Horse, is a poet constantly speaking to the woven music of ancestry, land, language. His poetry, as seen in these evocative, riddled lyrics excerpted from an extended sequence below, also seems bent on a hieroglyphic sense to conceal and communicate (conceal to communicate?). His brainy dance with language uncovers the way words are gutted with meaning: migrant, transhistorical, technological, bilingual. Or as he himself says here much more vividly: “pigtails of transistors.” The cross-wiring (cross-writing) of this poet’s radio soul is something we should all keep a close listen to.

how do you say?

the Latin weaves me

mom’s name, she tells me

at the kitchen table

an echo in the hecho

the skip rope of radio

Read of a simple cellphone

switch for the dowser—

to where water is cached

soldered on the zodiac:

how the sun in the ecliptic

shouted out the car window

at the newly arrived

& sped through the light

passing a given point:

for the prickly pear

Ya serví   Ya me voy

Served us the color

up over us the Lord’s

she left then for

Brandon Som currently lives in Los Angeles where he teaches composition in The Writing Program at the University of Southern California. He is the author of The Tribute Horse, winner of the 2015 Kate Tufts Discovery Award.
Share:

Tuesday in Cleveland, Republicans Sing "Shake It Off" 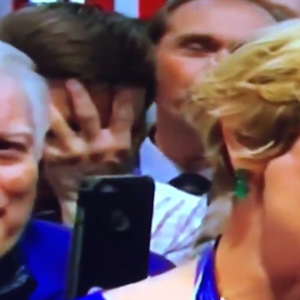 Tuesday in Cleveland, Republicans Sing "Shake It Off" 8:51 AM Coming slowly awake at the California Palms Hotel, here in Youngstown, Ohio. Since dawn the 18-wheelers have been...
© LitHub
Back to top