Tracey Chevalier: Past President of the Laura Ingalls Wilder Club

When I was eight I became President—unopposed—of the Laura Ingalls Wilder Club, membership three. We met in the basement of the Takoma Public Library in upper northwest DC. Overseen by the benign children’s librarian, Mrs. Carney (I was her star reader), we made bonnets out of paper, discussed our favorite scenes from the Little House books, and longed for snow we could pour maple syrup on to make taffy.

I was crazy about Laura Ingalls Wilder. I devoured her series of autobiographical children’s books that chronicled her life from the five year old in Little House in the Big Woods in Wisconsin, through her school-teaching teens, courtship and then marriage to Almanzo Wilder in These Happy Golden Years. (That same year—1971—a bonus arrived with the publication of the unfinished manuscript The First Four Years, about Laura and Almanzo’s early married years. If it had been released at midnight, à la later Harry Potter, I would have been first in line, wearing my paper bonnet.)

The Little House books give readers a firsthand view of the life of an American pioneer family, heading west in their covered wagon in search of the American Dream in the form of free, fertile land. Along the way they encounter bears, wolves, locusts, floods, drought, blizzards, Indians, and the stuck-up shopkeeper’s daughter Nellie Oleson, who gives Laura more grief than the rest put together. How I loved to hate Nellie Oleson!

I adored Laura. Smaller and plainer and naughtier than her perfect older sister Mary, Laura is the kind of girl who gets punished but is secretly her Pa’s favorite. In Little House in the Big Woods the family unusually takes a day off from their rugged pioneering to drive to a lake, where Mary and Laura discover beautiful pebbles on the shore. Mary is so good she only picks up one or two to take home. But Laura stuffs her pocket full—so full the pocket falls off her dress. “That’s my girl,” I thought, delighted with the idea that a pocket could come off a dress.

I wanted to take part in a pig slaughter and use the inflated bladder as a ball. I wanted a Christmas stocking with a penny in the toe. I wanted to come face to face with a wolf in the moonlight. I wanted to go sleighriding with Almanzo, who didn’t require much conversation and always had enough blankets to keep me warm. I even wanted to pick leeches off my legs—as long as I could throw them at Nellie Oleson.

Basically I wanted to live Laura’s life: full of incident and peril and new experiences, but wholesome and secure too, underpinned by a solid family unit. It was headed by lively, bearded Pa Ingalls, who had twinkly eyes, called Laura “Half Pint,” played the fiddle at night and always found reasons to move his family west, looking for the perfect homestead to cure his restlessness.

Recently I reread the books as “research” for my new novel, At the Edge of the Orchard, which is also about a family moving west. The dysfunctional Goodenoughs, however, are about as different from the Ingalls as you can get, with a weak father and a drunken mother. Ma Ingalls would have shook her head over them—given them a basket of ham and molasses and johnnycakes if they’d passed through, then bolted the door behind them.

At the same time as rereading the series, I read the newly published Pioneer Girl, the original memoir middle-aged Laura wrote, hoping to get it published. An editor wisely told her to translate the material into stories for children (with muscular editorial help from her daughter, Rose Wilder Lane).

It’s fascinating to compare what she took from the raw material and what she left out in order to shape her story. In the books there is a strong strain of libertarianism, and a magnetic pull west, which Pa sees as full of opportunity, with little government interference. (He seemed to find his idyll eventually in South Dakota—or else he just got tired. If he lived now, I suspect he would be holed up in Idaho.) In reality, the family did move east at one point, working for a year in an Iowan hotel, where Laura became familiar with drunks and dubious behavior. The Ingalls also lost a baby son there. Laura never alludes to him in the books. But there is a gap between On the Banks of Plum Creek and By the Shores of Silver Lake that I noticed even as a young reader. Laura seems to grow up fast in that lacuna; now we know why.

Inevitably when you reread books you loved as a child, you respond differently, because your own perspective has shifted. 45 years later, with a child of my own, I was much more interested in the parents, especially the mother. Patient Caroline Ingalls is presented as hard-working, neat as a pin and with a tiny waist even after several children. She keeps a perfect house, and cooks for Indians even though she’s terrified. When Charles wants to move yet again, she acquiesces with barely a word. Now I read that portrait and thought, “Here is the long-suffering spouse of someone with bipolar disorder.” For that is what also emerged from the reread. Charles Ingalls is moody and erratic, displaying the classic highs and lows, the shouts of joy and anger of the manic-depressive.

But the most important thing I discovered was about me and what I really wanted from those books when I was a girl. My mother was nothing like Caroline Ingalls. She couldn’t be. Diagnosed with a heart condition when I was three, she was often bedridden and died, aged 47, just before my eighth birthday. That year I buried myself in the books, revelling in the strong, consistent mother who was always there for Laura.

Of course, the books are just fiction. In the extensive footnotes to Pioneer Girl, I discovered something else that almost stopped my own heart. Laura and Almanzo eventually moved (east!) from South Dakota to Missouri. Laura returned for her father’s death, but after that she didn’t see Ma or Mary for the rest of their lives—another 20 years! Why not? There were trains, they could have afforded it. Didn’t Laura love her wonderful Ma enough to see her again?

I guess mothers are perfect only in fiction.

Tracy Chevalier is the New York Times bestselling author of seven previous novels, including Girl with a Pearl Earring, which has been translated into thirty-nine languages and made into an Oscar-nominated film. Born and raised in Washington, D.C., she lives in London with her husband and son. 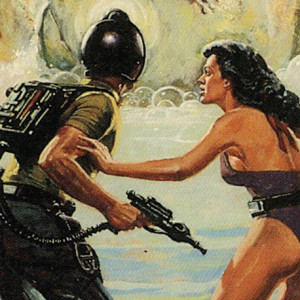 My father’s early science fiction stories placed him in the new wave of young writers changing the field by exploring social...
© LitHub
Back to top