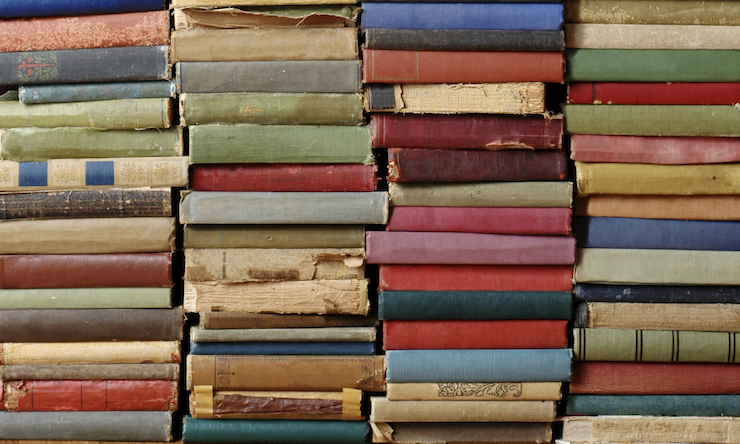 It’s draft three, a few hundred thousand words in, and I’m thinking about changing the title of my novel. This small and common exercise is an excruciating prospect, of course—with titles even fiction writers get to feel like poets.

To relieve the stress of this decision, I have been thinking back to a Typology of Titles that I invented a few years back in an attempt to assuage the fears of an Introduction to Creative Writing workshop. Titling is an important art—you’re choosing the very first words that a prospective reader will encounter—but I think that, in some ways, the stakes are lower than they seem. In my view there are three general tiers of titles, and they are:

Obvious caveats: this is reductive, and title quality is (mostly) subjective, so these three tiers cannot be more than thin arbitrary lines penciled on a broad spectrum. Even so, I respectfully propose that it stands as a workable classification system, insofar as it can help you get on with other business. As I put it to that class, you should certainly allow enough space in your brain for brilliant titles to crash land without warning, and you should also be vigilant for titles that sound strange and wonderful for a brief moment but reek embarrassingly when you open your manuscript the next day. Otherwise, take heart, aim for the middle, and relax.

A good sixty to eighty percent of titles fall in the Not Terrible tier, and that is wonderful news. To use a Very Famous example, Raymond Carver’s “Cathedral” has a not-terrible title. It’s a grand word, even an imposing one, calling to mind great structures and systems, and yet the lack of a definite article renders it anonymous and ordinary. All of which befits an ostensibly low-key story about domestic epiphany.

Take heart, aim for the middle, and relax.

Compare that to “Gazebo.” (I am continuing to use Carver examples because his status as established and dead will make it easy for us to be critical.) “Gazebo” is an unfortunate resident of Terrible territory. Probably only a tenth of story titles are actually bad, and this is not one of the worst. I don’t actually even mind the word gazebo—it sounds fun, like a clown’s name—but it’s no cathedral, and it does not benefit from the elision of the article. With an article, “The Gazebo” might edge closer to Not Terrible; at least we could expect the titular gazebo to serve as the site for some interesting goings-on. But while separating the from cathedral still leaves us with a rich, intriguing symbol, cutting it from gazebo leaves us with . . . gazebo. If you saw it in a table of contents, would you skip other stories to read “Gazebo”? What about “Trellis”? What about “Leaf Blower,” or “Pruning Shears”?

(Although, now that I look at it, I kind of like “Pruning Shears.” Among stories that get their names from objects, there is a positive correlation between the appeal of the title and the likelihood that the named object will be used as a weapon.)

To round out our triptych, let’s consider “Bicycles, Muscles, Cigarettes.” If you’re asking me, this one is Great. Aside from being a delightful, chunky collection of sounds, it is a simultaneously sardonic and self-serious list of manly objects, in ascending order of supposed maturity—“manliness” and “maturity” being two subjects scheduled for demolition at this story’s climax. And it stands out without being totally off the wall. Quick—what’s another title comprising three plural nouns?

Again, the advantage of this system is the ratio it reveals. Not many titles are Great, but not many are Terrible, and that is a comfort in our disconcertingly subjective industry. Besides, Not Terrible is great! If the only thing a title does is fail to repel a potential reader, I count that as a victory. The text itself should and does still shoulder the main responsibility of “being good,” and there is nothing wrong with a title that rises to the occasion merely by not screaming, “Read something else.”

While these tiers have been based (ludicrously) on perceived quality, for further taxonomic interest let’s consider some of the most common types of titles, remembering that titles alone are under scrutiny—not the pieces they represent—and restricting ourselves to short stories for the sake of some basic pre-categorization. (And to steer clear of novel titles, which would invoke the dilemma I am trying to ignore.)

The One-Worder
The one-worder is a classic, from Chekhov’s “Gooseberries” to Mary Gaitskill’s “Secretary.” Both of those are decent, I’d argue—solid if unremarkable eighty percenters. Then you’ve got “Gospel” by Edward P. Jones and “Apostasy” by Mary Robison, both of which are fairly great, in my humble opinion. (Maybe one-worders benefit from religious connotation?) And then there’s “Give” by James Salter, which is just terrible. Poor James Salter—the man wrote exquisite, harrowing fiction, and his tables of contents read like the track listings of pretentious folk albums. By contrast, Isaac Babel’s “Salt” is so mundane that it achieves loveliness, never mind the story’s actual content. Elizabeth Tallent’s “Narrator” is both blunt and full of meta-intrigue.

The “The”
Not so much classic as ubiquitous, the “The” title is a phylum among the classes on this list. It is so common a baseline that deciding not to name a story “The Something” might be considered the first step of the titling process, whether or not it’s done consciously. “The Shawl” (Ozick), “The Swimmer” (Cheever), “The Lesson” (Bambara); “The Book of Harlem” (Hurston), “The Book of Sand” (Borges), “The Book of Miracles” (Danticat); “The Garden Party” (Mansfield), “The Sacrificial Egg” (Achebe), “The Girl in the Flammable Skirt” (Bender). Look through any anthology from any era. Almost by their nature, “The” titles are Not Terrible. The presence of the definite article can add interest or menace to an otherwise innocuous title (“The Waltz” by Dorothy Parker), or participate in the energy of something more fanciful (“The Death-Dealing Cassini Satellite” by Adam Johnson), or help blend the grandiose with the quotidian (“The Princess of Nebraska” by Yiyun Li).

The Name
What is our protagonist’s name? Vanka? Okay, then we’ll call this one . . . “Vanka.” (Chekhov.) To some extent, the success of naming a story after a character depends on the character name in question. No one is going to skip over “The Death-Dealing Cassini Satellite” to read “Larry.” But “Camilla” (Mary Robison) has a nice ring, more charisma than “Larry” anyway, while “Ruthy and Edie” (Grace Paley) promises a relationship with probable tensions, as do “Sabrina and Corina” (Kali Fajardo-Anstine), “Wolf and Rhonda” (Jamel Brinkley), and “Jane and the Cane” (Lydia Davis). This latter example reminds us that name titles are not limited to names exclusively, as also demonstrated in William Trevor’s titling habits (“Coffee with Oliver,” “Mrs. Acland’s Ghosts,” “The Raising of Elvira Trimlett”).

The Dialogic
Dialogic titles may or may not be direct quotes from the story, but in either case they take on a conversational tone, or even ask (or answer) questions. Carver loved these: “Why Don’t You Dance?” “What Do You Do in San Francisco?” “They’re Not Your Husband.” Helen Oyeyemi fuses a finger-wag with irresistible mystery in “if a book is locked there’s probably a good reason for that don’t you think.” Barry Hannah, as might be expected, makes it weird: “Hey, Have You Got a Cig, the Time, the News, My Face?” Julie Orringer transmits humble pathos through “When She is Old and I Am Famous,” and Annie Proulx coins an ambiguous adage in “People in Hell Just Want a Drink of Water.” (Which is Great, one of my all-time favorite titles.)

The Wackadoo
The Wackadoo forgoes convention in favor of polka dots and arm flailing. It might be unusual in a relatively quiet, form-adjacent way (“Nothing: A Preliminary Account” by Donald Barthelme), or it might be only and unapologetically itself (“Heads of the Colored People: Four Fancy Sketches, Two Chalk Outlines, and No Apology” by Nafissa Thompson-Spires). Haruki Murakami likes himself a wackadoo (“On Seeing the 100% Perfect Girl One Beautiful April Morning”) and Lorrie Moore has dabbled (“People Like That Are the Only People Here: Canonical Babbling in Peed Onk”). As with other categories, there is crossover and relativity here—“Sorry Fugu” and “The 100 Faces of Death, Volume IV,” both by T.C. Boyle, are weird in completely different ways. This is perhaps the riskiest category, with a somewhat lessened chance of achieving Not Terrible-ness, but a better shot at Great. (And terrible.)

The Play On
The Play On employs some kind of twist. It borrows a format, gestures in the direction of the expected, but delivers a quirk. Frank O’Connor’s “Don Juan (Retired)” uses a parenthetical insertion to specify what era of Don Juan we’re getting, and disrupts a classic Name title. Amelia Gray’s “Fifty Ways To Eat Your Lover” is a funny hat tip to the Paul Simon song, and only lightly teases how amazingly gross it will get. Deborah Eisenberg’s “The Girl Who Left Her Sock on the Floor” is a bait-and-switch of appealing mundanity—those first three words could lead into any number of interesting, frightening, dramatic clauses, and yet the title gives itself over to what seems like a hyperbolically inconsequential specification. The Play-On defines itself in relation to what it is not. These titles are three parts normal, one part wackadoo.

If you have the energy to strive for Great, then by all means strive. Explorers in the outer realms of title-creation do important work, expanding future possibilities for all of us.

Of course this list is nowhere close to being exhaustive, or even particularly thorough. And, as can be seen even from the examples above, there’s no shortage of cross-pollination between categories, and a given title might sit comfortably in several at once. The category isn’t important, anyway—what’s important, when engaged in the art of titling, is to strive for Not Terrible. This essay itself has a Not Terrible title. (I hope.) As for the dilemma of my novel title, despite my tortured oscillation both options are squarely Not Terrible. I’m okay with that.

If you have the energy to strive for Great, then by all means strive. Explorers in the outer realms of title-creation do important work, expanding future possibilities for all of us. But whether you’re naming a short story, a poem, an essay, or an unclassifiable feat of hybridity, I hope it helps to remember that an “okay” title can be great, and that “just fine” is an illustrious category. Use a name, lift some dialogue, have fun. Failing all else, name the piece after a weapon.

Chris Drangle is a writer from Arkansas. His fiction has appeared in One Story, the Oxford American, Granta, and elsewhere. He has taught creative writing in New Orleans, Central New York, the Bay Area, and Kazakhstan, and currently lives in Athens, Georgia 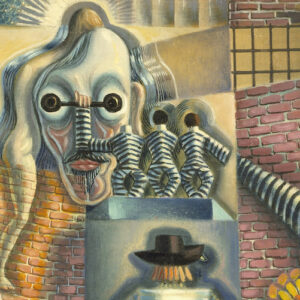 Image by Benjamin F. Berlin, via LACMA Mental Rehearsals Imagining alternate realities does not stop with childhood. We practice...
© LitHub
Back to top