Tomorrow Will Be Better 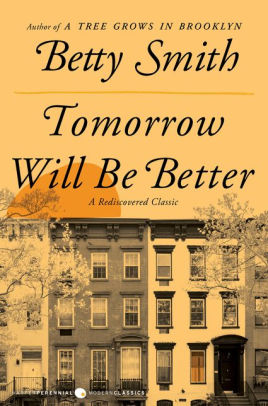 The following is excerpted from the reprint of Betty Smith's novel, Tomorrow Will Be Better, about young love, marriage, and hope. Smith (1896-1972) was an American author, best known for her 1943 novel A Tree Grows in Brooklyn, which is considered one of the greatest American novels of the 20th century.

There couldn’t be a colder—a lonelier place in the whole world, thought Margy Shannon, than a deserted Brooklyn street on a Saturday night. She pulled her firmly held coat more tightly about her as she turned a corner. She was out walking the cold wintry streets because she was seventeen and had a job. She was independent now. She didn’t have to be in the house by nine o’clock. She felt she had to use her hard-bought freedom even if it froze her to death. How easy to give up; go home and sit in the warm kitchen! But she had to hold out; get her mother used to the fact that there was a wider world outside the walls of the grudging home. So she walked the streets alone on a cold January night.

Margy had left school at sixteen after finishing two years at Eastern District High. She had looked forward to leaving school, getting a job, being independent, and having a little money of her own. She had been anxious to start leading a life of her own. She had found a job—an interesting job. She was mail reader in the Thomson-Jonson Mail Order House which had its offices and warehouses down near the Brooklyn docks; an hour’s trolley ride from her home.

But the expected independence had turned out to be merely technical. Her mother kept the silver cord taut and vibrant with possessiveness, and Margy, like many Brooklyn girls who came of poor families, had to turn in all of her salary at home.

She earned twelve dollars a week. Like her father, she placed her sealed pay envelope on her mother’s outstretched palm each Saturday afternoon. That was the tradition; a decent husband or a good child brought home the pay envelope unopened.

Flo gave Margy two dollars out of her envelope. Out of this Margy paid carfare to and from work and bought the daily bologna sandwich and cup of coffee which was the routine lunch of most of her coworkers. That left fifty cents a week for everything else; the hot dog she and a girl friend indulged in when they took a Sunday trolley ride to Canarsie in the summertime or the cup of hot chocolate with fake whipped cream on top and two crackers on the saucer which was the traditional treat at the end of a Sunday stroll in Brooklyn. An occasional dime-store lipstick had to come out of this fund, too.

Margy never had enough money for all the things a young girl wants so desperately. For instance she’d like to have one of the new-style wind-blown bobs, like her office friend, Reenie, had. But such a haircut meant frequent trips to the barber (with a nickel tip involved), to keep the hair in intricate trim. Since she couldn’t afford that, she had to be content with her shingle bob with thin, fishhook curls pasted to each cheek.

Margy had left school at sixteen after finishing two years at Eastern District High. She had looked forward to leaving school, getting a job, being independent, and having a little money of her own.

Sometimes she dreamed a little dream. Suppose she were to get a raise! Would she tell her mother? She could take the extra dollar or two out of the envelope and reseal it before bringing it home. And what Margy could do with that extra money! Still and all, she thought, that would be cheating. She remembered what a grade-school teacher had said that time she had caught Margy sliding her eyes over to a seatmate’s paper during a test.

“That’s how a criminal begins,” said the teacher. “He cheats in a test and gets away with it. Then he cheats in bigger and bigger things. Finally he ends up in Sing Sing.”

Margy had no intentions of becoming a criminal. Yet………? Who’d ever find out? It was like the old childhood dilemma: If you’d press a button and a Chinaman died in China, leaving you a million dollars, would you press that button? Sometimes Margy had decided that she’d press it very firmly; other times she had decided that a million dollars would never compensate for causing a death—not even a Chinaman’s on the other side of the world. Well, she had never had a chance at the button and there was no immediate hope of getting a raise. So there was nothing to decide.

Margy planned to pass Frankie’s house once more before she went home. She was not in love with Frankie but he was one of the few boys she knew. She had first become interested in him when he went up for his diploma the time both of them graduated from P.S. 18. She had known him only as “Frankie,” an obscure, dark, Irish boy. But at graduation they called out his full name: Francis Xavier Malone. The name sounded important—like a mystery revealed. And Frankie, himself, had seemed important from that time on.

She had passed Frankie’s house twice before in her walks around the block. This time she was rewarded. He clattered down the steps. She pretended to come out of a deep study with a slight start when he spoke to her.

Margy had no intentions of becoming a criminal. Yet………? Who’d ever find out?

“It’s awfully cold, isn’t it?” she replied in a tone that she tried to make lilting and provocative.

He was off in the opposite direction, toward the corner candy store for a pack of cigarettes or to see if the morning paper had arrived. Margy cursed the luck that had made her walk around the block clockwise. If she had been walking the other way, he would have fallen in step with her and they would have walked as far as the corner together. Frankie wasn’t much, she knew, but he was better than nobody. He would have served until a real boy friend came along.

Although it was only a little after nine when she got in, Flo questioned her suspiciously.

Natasha Trethewey’s Memorial Drive is being adapted for TV.

An Interview with T. Ryder Smith, Narrator of Fire in Paradise by Alastair Gee and Dani Anguiano 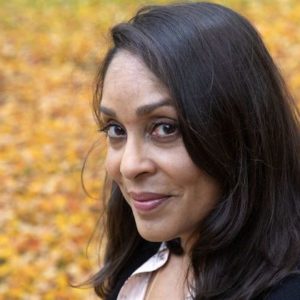