To John Lewis, Whose Strength and Sweetness Never Faltered

A Letter From Poet Nikky Finney

There was a colossal sweetness about you that some mistook for weakness. A sweetness, that seemed to power your actions and your life. Seems to me it was a particular kind of sweetness that was perhaps, given to you, taught to you, perhaps, by your large and loving family, and also taught again, perhaps, by all the tambourine-ing and lightning bolt words you soon discovered in those second and third hand books in that small segregated school house, in Pike County, Alabama. Those same books that you soon learned were the perfect size for marching off into battle with.

John Robert Lewis, this sweetness I speak of continued to be nurtured in you, even as you grew from a Black boy, stowed away in a corner of the American south, to a Black man walking the halls of Congress for thirteen terms, from the 5th district of Georgia. Even as men who did not know your powerful sweetness charged at you on bridges with nightsticks and bully punches, intending to beat the love out of you—the love that, seems to me, fragments of which might have been found inside some of those books you always kept close in your back pack. It was never a secret how much you adored books and how they gave you the power to love people back—no matter what.

I’ve been looking for your Kilimanjaro sweetness everywhere, I need it now more than ever. I don’t want it like a pill I might pop when my anger rises with the news of the day. I want it like a back pack. Something I might put on and tighten around my shoulders and not take off until it is time for bed. Something heavy that has the power to pull back my shoulders. A John Robert Lewis back pack, jet pack, power pack, filled with a powerful sweetness in the face of no matter what. A fueled thing that would lift me away from all this hatred when I need it to. I’ve been trying to keep what you taught me top of mind because what I really want to do is punch every booming, bombastic, ruthless liar in the mouth. People are dying because of lies. Hundreds of thousands of people, dying and losing everything they have ever worked for because some people do not care if they live or die. I have not been feeling very non-violent since you left and so I decided to begin my new days here on earth, without your marching feet as one of my sonic compasses, here in my trusty writing chair engaged in the great epistolary tradition of reaching out to you in the only way I truly trust.

Tonight, I am remembering that sweet story of you wanting to go to school, when you were six or so, your father, waking you early that one morning to tell you to go to the fields to work rather than to school to read. That story—and so many others about you—was sent back and forth across the community switchboard during the week of your crossing over. I can hear the rich inflection of your southern voice as you retell that story of how you hid beneath the porch, waiting for the right moment to hightail it to the school bus in order to sneak a day in with the books before paying back the two days in the field that you owed your father. John Robert Lewis, you are a boy, who I daresay, would never disobey his father, unless of course there was a book involved.

You and I both know that sweetness can often be attached to disobedience, that it can follow a boy or a girl until they begin to understand its full power—and only then can they heed its call. I am talking about the sweetness that can sometimes be found in books. A kind of sweetness that can even rival that unrivaled moment of preaching to chickens in the back yard or staring straight up into the coal black country sky, dreaming of one day leaving all that never ending sweat and dirt for the blinking lights of the city. I might be wrong about that. Send me a sign John Robert Lewis. Let me know for sure. You were a dust bowl boy, born a generation after the boll weevil and the Great Migration, and therefore there were so many reasons you could have but never did leave the South. The South where you were first handed a beat-up book and locked out of every library. But you never left us. We know this like we know our family names.

While you were becoming a man of colossal sweetness, the great malignancy of racism was ticking like a bomb.

At seventeen, the story goes, you left Fisk University and the Baptist Seminary in Nashville, and began plotting what to do with all the words and feelings forming inside you like a geyser. They say somewhere along the road you began to fancy the sweet taste of cold water bubbling out of fountains that did not wear name tags of COLORED and WHITE. They say your taste buds grew loud for the sweetness of a cheeseburger served at a lunch counter and not a side or back door. I never got to ask you how you learned to concentrate so deeply, how you let your legs dangle freely on that red cushioned swivel chair, and not be distracted by all the hatred swirling around your bowed head as you read your favorite book?

John Robert Lewis, as you know, life is always made of opposites. While you were becoming a man of colossal sweetness, the great malignancy of racism was ticking like a bomb. You and the courageous others were spat upon. Cigarettes routinely sizzled out on your heads and hands. Hot coffee was poured on you. Instead of sweetness returned you watched water hoses drill their hatred into the breastplates of Black women whose bodies walked and marched and bent toward the sun in a Black woman arc of prayer. But those who had never been taught the power of sweetness could not stop the love you had been raised in, the love you had read about, and the freedom to hold on to that love. I need a lesson John Robert Lewis. My father named me Love Child but my Black woman coffer is running low these days.

I was seven when you woke up on what was to be Bloody Sunday, March 7, 1965. Tell me, kind sir, how is sweetness maintained when someone wakes and knows he is about to be beaten and about to go to jail or worse? Is the secret found in what he packs in his bag for that day? Where does one even find and purchase a back pack in rural Alabama in 1965? And why is your coat not the color of war or camouflage? Why is it the color of eggnog or ice cream or the first light that pierces the morning Mother of Pearl clouds? You, ready to march with your one apple, your one orange, your two books (Thomas Merton and Richard Hofstadter) ready to go to jail for the rest of your life—if necessary.

These books you chose were your anchors—there to weigh you down and keep you closer to earth when the random tossing of black bodies began—and you knew it would begin. Your toothbrush and toothpaste, packed and ready, there with you not because you cared so much about your own mouth, that was about to be filled with blood, but because you knew before the night was through that you would be around other people, those who had been fighting alongside you, in a small jail cell, and you thought it prudent, thoughtful, to be able to brush your teeth for those who would be cramped and near.

John Robert Lewis, there was a magnanimous sweetness about you that I never took for weakness. I need it with me now and not tomorrow. I need it now because the rates of Black Americans dying from COVID-19 are twice as high as anybody else. I need it now because they have unhooked and towed away the mail sorting machines in the Post Office in hopes that our votes won’t arrive in time this November. I need to be able to store tanks of your opulent sweetness for all the days ahead. Tanks filled with your unshakable human understanding of who I need to be when the buckets of human spit start flying my way and the stolen sorting machines that have been rolled away block me from what I need to remember. When the new fire hoses hit me and my brothers and sisters pouring into the streets of cities and small towns of America. When the hot gourmet coffee of today is poured on nappy-headed, book-worm screaming heads of today. I need to re-study the molecular design of your sweetness and remember how it did not shrink away under the hooves of horses coming straight at you. You there in your coat the color of Christmas eggnog and oyster shells and moonlight.

On the night you died I wrote in my journal that Frederick Douglass must have been whispering in your ear when the wave of Alabama State Troopers moved in to crush you there in your ice cream colored coat, “Power concedes nothing without a struggle?” Over the five days of your funeral I wondered to myself if you were reciting Invictus right before the dogs were released and the batons landed on your head?

You were a sweet and powerful man John Robert Lewis, walking through the fire of your time. You were a man who somehow became sweeter the more fire he ate. Maybe that is the key, the sign you will send me back down through the clouds. I await your reply. Now you are in the arms of Miss Lillian, your great librarian. I know she has been saving hundreds of books for you. Rest now. Read now. We will take it from here.

Nikky Finney was born by the sea in South Carolina and raised during the Civil Rights, Black Power, and Black Arts Movements. She is the author of On Wings Made of Gauze; Rice; The World Is Round; and Head Off & Split, which won the National Book Award for Poetry in 2011. Her new collection of poems, Love Child’s Hotbed of Occasional Poetry, was released in 2020 from TriQuarterly Books/Northwestern University Press.

The Year Afropessimism Hit the Streets?:
A Conversation at the Edge of the World 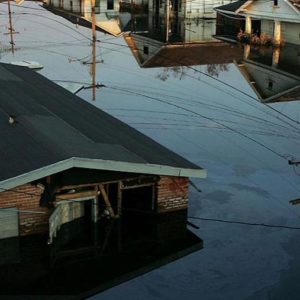 Looking Back to the Devastation of Katrina, 15 Years Later Betsy Nineteen sixty-five. Tail end of a notably mild hurricane season. It rained so hard the yards between the houses flooded—standing...
© LitHub
Back to top