To Heal or To Hurt? On Being a Military Medic in Iraq

A soldier lies in the sand, blood pooling beneath his head, mouth gulping at the air. His eyes fixed, head tilted off to one side, legs and arms motionless. He’s a young soldier in his early twenties, late teens, a young man who should be a freshman in college or finding a summer job while deciding what to do after high school. In less than five minutes he’ll probably die right there in the dirt, right at your feet. You will carry his bloodstains on your boots and on the sleeves of your uniform.

You possess the medical skills to save his life and your training as a war fighter helps you think and act decisively. You respond confidently, even brazenly, yet you understand that saving a patient with a head injury involves lots of luck. Maybe this is one of those lucky days and your patient survives. You feel good. But you also feel that this soldier with a shrapnel hole in his skull and a bit of brain oozing and lots of blood dripping might eventually wish you had let him die in the sand, thousands of miles from home with the other soldiers looking on. Your gut tells you this one particular patient has a chance of survival. It also tells you if he ever makes it home, he will live in pain for the rest of his life.

Soldiers require one kind of breathing, doctors quite another. And soldier-doctors, well, they require a fusion of types: the ability to use one lung for soldiering and one lung for doctoring, a unique chimeric breathing shaped from the twisted strands of wildly dissimilar DNA.

It’s natural and unnatural, that genetic code, to know as much about killing as healing, to listen for the sounds of bullets in one moment, then listen for the sounds of the wounded in the next; to love each strand with rabid dedication and to hate them both; to cross back and forth between the two. Pull a trigger—Pack a wound. First one, then the other, the prime necessity of war, that instant crossing from doctor to soldier and soldier to doctor without focusing on the difference between the two, because in the end all that matters is just one thing: breathing like a soldier in one breath, then breathing like a doctor in the next. War—Medicine. Inhale—Exhale.

Soldier-doctor breathing requires large, bold breaths. Breathe in war like you breathe in air. Memorize the shapes of all the aircraft. Learn psyops and night ops and commo and intel. Become a student of ballistics and small-unit tactics. Study the beauty and balance of the human body: skin, heart, lungs, and brain. Learn the chemistry of blood and the physics of circulation. Observe the mechanics of a perfect gait. Smear camouflage paint on your face and your ears and on the backs of your hands. Let your muscles learn the speed of close-quarters combat. Work them until the movements become natural, like reflexes. Train your mind for war, your legs for battle, your hands for surgery. Teach your fingers to feel the smallest lump of pathology and the steady rhythm of a beating heart, then teach them to feel the knurled steel of triggers and the full metal jacket of bullets.

Hearing is a form of breathing. Listen. The sounds tell you when to fight and when to weep—even when to die. The sounds are your friends. As long as you hear them, it means you’re alive. Listen to the clamor of surgical instruments or to the prayers of chaplains or to the quiet whispers of Army nurses talking to their patients, even though their patients cannot hear because hearing has left their bodies. Spend your days listening for the monotone warnings of cardiac monitors. And when you hear that flatline sound and it doesn’t stop, hit the silent-mode button, then fill in the official medical forms with checkboxes for DOW and KIA (died of wounds, killed in action). Try to minimize the DOW count. Sleep when you can, but wake to the sounds of incoming helicopters. Wake to the cries of the wounded and to the silent screams of soldiers whose limbs and guts had been burned or torn or separated from their bodies. Respond to the high-pitched wind of an RPG, the explosive rattle of small-arms fire, and the bone-breaking blast of an IED. Alert your mind to the rustle of boots and the too-quiet stillness just before a battle.

Fear makes its own kind of sound. Listen for the patterns, the ones that whisper about going home without legs or arms and the ones that mourn the painful deaths of soldiers. Learn to live with those deafening sounds, especially the ones telling you your medical skills may never be enough—that because of you a soldier may die. Shake your fear and keep moving forward.

A soldier with a salvageable injury lies at your feet. Iraqi insurgents are attacking your position and you need to clear the area fast. You stop to return fire. Even though you are trained to heal, you are also trained to kill, and that fact makes you a bit hesitant. You lay your hesitation aside for a moment and put your warrior hat on—because, after all, you are in a war. Your gut tightens as you fire a round or two. You grab the soldier by the collar of her uniform and jerk her torso up and off the sand, then sprint as fast as you can for twenty yards.

As you run, the soldier’s legs drag and slow you down. Other soldiers help you throw her on a field litter so you can get the hell out of the kill zone. Her right leg dangles off to the side. A medic grabs it and plops it back onto the litter. She screams so violently you can see the vessels in her neck distend and pulse. The leg is barely attached. It’s covered with dirt and sand. The bones look like broken spears as they poke through her skin and the burned fabric of her uniform. Your patient is losing blood faster than you know is sustainable for life, and you know if you don’t get a tourniquet on her thigh right now—right in the middle of this attack—she’ll just bleed out and die. So you slap one on and tighten it up.

You’re in this fight. The tourniquet slips. Bones slice against her open wound. The soldier starts bleeding again. Draw your long-blade knife from its sheath, grip the handle as tightly as you can, then reach down and cut the soldier’s leg off, right from where it is barely attached and dangling—just cut the goddamned thing off and leave it in the sand, and when she keeps crying and screaming, yell at her, “Shut the hell up!” Imagine that she does. When you finally manage to get the tourniquet tightened again, you’re relieved that you made that decision—the one about using your knife, because you had no more time to dink around. You needed to move and the dragging leg was slowing everybody down, and the soldier was better off alive—even without her leg.

Learn how your enemy breathes. Study how they do war—how they treat their wounded and gather their dead. Observe where they live and where their poets gather for coffee; know why they write letters to their wives, what they say, what they leave out. Understand their prayers and their dreams and their fears and their families. Learn how they cuss in their native language, how they read their scriptures and their newspapers and their children’s schoolwork. Absorb the color of their land and the smell of their trees. Discover where their rivers bend and their deserts turn to hills.

Read the Geneva Conventions. For the record, sign the Red Cross card that identifies you as medical personnel. Rip it and toss it. Learn the law of war well enough to know when to bend it. Study the manual governing enemy detainees and prisoners of war. Know the rules that define how you must treat them, even when they spit on your skin and call you a murderer. Apply escalation of force, but know when to open fire and ask questions later. Learn how to hate your enemy without crossing the line between soldiering and savagery. Control your breathing. Use your doctor mind and your soldier mind. Focus. Let them become one. Release your body and mind into the hands of war.

It’s possible you could end up in the middle of a fire fight. Don’t inch. Soldiers will depend on you to make all the right decisions. You may feel that all the “right” decisions are a blur, even though you’ve spent years in training just so your mind can never get blurred—so you can think without hesitation in the chaos and screaming of combat. You trained well, but now you think all those war games and evac scenarios didn’t prepare you. You’re right. How could they? This is real. The fear and the blood and the shit are real. Death is real. War is real. And all you can do is adapt and breathe and try to hold on. So you grasp your weapon and your ammo, your knives and your body armor. You carry them next to your medic bag, next to the bandages and tourniquets and morphine. When you grab your gear, it feels like you’re grabbing fear or emptiness. Despite what you feel, you move out anyway. As you do, you sense that the mysterious alchemy of war has transformed your nature.

Jon Kerstetter received his medical degree from the Mayo Medical School in Rochester, Minnesota, and his MFA degree from Ashland University in Ohio. He served as a combat physician and flight surgeon for the U.S. Army and completed three combat tours in Iraq. His writing has appeared in The Best American Essays, River Teeth, and other literary journals. 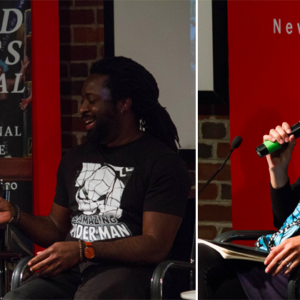