Next week is the grand finale! With guests, surprises, and prizes from BOMB, A Public Space, One Story, The Common, and more.

100: In spinoffs of this novel, Elizabeth Bennet has become a cannibal, a zombie, and a serial killer.
[Pride & Prejudice]

200: A young Tom Stoppard wowed the 1966 Edinburgh Festival with this imagining of two of the Bard’s more minor characters.
[Rosencrantz and Guildenstern Are Dead]

300: This writer was so bothered by Alonso Fernández de Avellaneda’s unauthorized use of his knight character that he killed him off in Part Two of his epic novel.
[Cervantes]

400: Fifteen years after “The Godfather” Mario Puzo published this sequel, named for its Mediterranean setting. (Also a style of deep-dish pizza.)
[The Sicilian]

500: Eugene O’Neill’s final work was this follow-up to “Long Day’s Journey into Night,” featuring the ailing and alcoholic James Tyrone.
[A Moon for the Misbegotten]

100: While known for Florida capers like “Rum Punch,” he started with westerns like “3:10 to Yuma.”
[Elmore Leonard]

200: Her debut poetry collection “When My Brother Was an Aztec” employed humor to document Mojave life.
[Natalie Diaz]

300: This prolific author, who called his novels “frontier stories,” won the sole National Book Award for the Western category, in 1979.
[Louis L’Amour]

400: Post-Civil War Texas is the setting for this acclaimed Paulette Jiles novel.
[News of the World]

500: CLUE CREW WITH TEA OBREHT
Gaylord DuBois, the writer of over 3,000 comic book stories, is best known for creating this lawman, who is name-checked in the 1994 film “Airheads.”
[The Lone Ranger]

400: James Patterson’s latest shares its one-word title with a song by Deep Purple, and a 2016 horror film by Mike Flanagan—and what you may say to a stubborn child.
[Hush]

500: Hoarders may own copies of these two very different books by Nora Roberts and John Fowles.
[The Collector]

300: A Catholic service, or a format for the market
[Mass]

500: A self-sustaining body part with a specific function, or an institution’s official periodical
[Organ]

100: If you mistakenly believe it’s fun to party with novelists, you’d have wanted to attend the 1922 Parisian fete with Joyce and Picasso—and this French novelist, no stranger to high society, who arrived at 2:30am.
[Marcel Proust]

200: DAILY DOUBLE
He celebrates his 111th birthday party in “The Fellowship of the Ring,” inviting everyone in the Shire (so as not to play favorites).
[Bilbo Baggins]

300: In “Some Hope,” this Edward St. Aubyn protagonist is dragooned into attending a formal dinner for an awful Princess Margaret.
[Patrick Melrose]

500: In 1966 this writer hosted the Black and White Ball for his “swans”; the New York Times later called it “the best party ever.”
[Truman Capote]

400: What’s hot—and in “Troilus and Cressida,” “time is like a ____ host that slightly shakes his parting guest by the hand.”
[Fashionable]

600: A lumpy bed-—and in “Romeo and Juliet,” time is called this and asked “Why camest thou now to murder, murder our solemnity?”
[Uncomfortable]

800: Capote owes a debt to this “King John” coinage, in which Constance derides a slave for a lack of feeling, saying “Hast thou not spoke like thunder on my side?”
[Cold-blooded]

1000: A broad satire might be called this—and in “Love’s Labour’s Lost” its derived from an Italian clown and likened to “a Christmas comedy.”
[Zany]

Category 2: THE STATE OF POETRY

200: Eliot’s Prufock wonders is he “dares to eat” this, the official state fruit of Georgia.
[Peach]

400: Gene Hackman completists and Big Ten fans will know Indiana’s nickname, which was first coined in an 1833 poem by John Finley.
[The Hoosier State]

600: Alabama and Kentucky share a state fruit, of which Sylvia Plath wrote, “Big as the ball of my thumb, and dumb as eyes / Ebon in the hedges, fat / With blue-red juices.”
[Blackberry]

800: Kansas’s state motto, “Ad astra per aspera,” translates to “To the stars, through struggle” and is credited to this Latin poet.
[Virgil]

1000: In Whitman’s elegy to Lincoln the poet mourns when these “last in the dooryard bloom’d”; its purple version is New Hampshire’s official flower.
[Lilacs]

200: When asked about how many books he reads this “Telegraph Avenue” novelist replied, “Three in a month; seventeen at a time.”
[Michael Chabon]

400: DAILY DOUBLE
Asked what advice he’d give his younger self, this Japanese novelist said, “I should have used a nom de plume. That is the only thing I regret now.”
[Haruki Murakami]

600: When asked about favorite books, Yiyun Li says she rereads this author’s “Disgrace,” while Laila Lalami returns often to “Waiting for the Barbarians.”
[J. M. Coetzee]

800: When asked which book’s structure she admires most, this “American Marriage” writer cited “The Sound and the Fury”: “I love that you can read it backward.”
[Tayari Jones]

1000: On the question of researching his novel “Brooklyn,” this writer said he once had to attend a baseball game: “It is very slow and strange, like watching paint dry in the company of maniacs.”
[Colm Tóibín]

Category 4: AROUND THE WORLD

200: Though born in Prague, Franz Kafka wrote in this language.
[German]

400: César Aira, who has written over a hundred books, is considered among this country’s great contemporary novelists.
[Argentina]

600: The novelist Gerald Murnane, who hails from this country, taught himself Hungarian so that he could read Gyula Illyés, and recorded a 1600-word palindrome.
[Australia]

800: Regarded by her fellow Greeks as one of the greatest lyric poets of her time, only one work–“Ode to Aphrodite”—exists today in its entirety.
[Sappho]

1000: In 1967 James Ngugi changed his name to Ngũgĩ wa Thiong’o, renounced English, and began writing in his native Gikuyu as well as this official language of Kenya.
[Swahili]

800: You’d think Jamaica Kincaid was born near Kingston, given her pen name—she’s actually from this more southern Caribbean island.
[Antigua]

1000: Romain Gary is the only writer to have won this prize under two names: his own, and as Émile Ajar
[Prix Goncourt]

CLUE: She found acclaim and (more) fortune with The House of Mirth, but this was her second book, after the little-known debut “The Valley of Decision.”

WATCH: A Night of International Queer Writing at the Rally Reading Series

Sir Jonathan Bate on His Journey to Ted Hughes 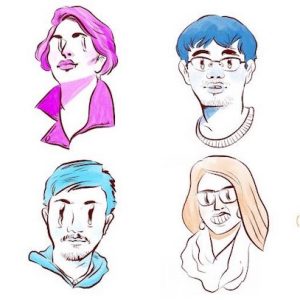 WATCH: A Night of International Queer Writing at the Rally Reading Series

The Rally Reading Series and Words Without Borders celebrates a multilingual reading of queer writing from around the world,...
© LitHub
Back to top