Indie bookstore of the week: Books Are Magic, who are triple-matching donations to local BIPOC LGBTQ+ youth groups.

300: Pearl S. Buck’s “Earth,” Marcy Dermansky’s “Marie,” and Hans Christian Andersen’s “Duckling” will get you this Clint Eastwood flick.
[The Good, The Bad, and the Ugly]

400: Take Forster’s posthumous novel, Batman’s sidekick, and the author of “Night Boat to Tangier,” make them Australian brothers and you’ll get these pop stars.
[The Bee Gees (Maurice, Robin, and Barry)]

100: Margaret Atwood rewrote “The Odyssey” from this character’s perspective for the Canongate Myth Series (8)
[Penelope]

200: August Wilson’s birthplace and where he set ten of his plays (10)
[Pittsburgh]

100: This Woolf treatise emphasizes a private space for your distilled sugarcane.
[A Rum of One’s Own]

200: In this Judy Blume concoction a young woman struggles with religion and mixes tequila, lime juice, and triple sec.
[Are You There, God? It’s Me, Margarita]

300: Henry James’s governess can escape the ghosts by mixing some vodka and OJ.
[The Turn of the Screwdriver]

500: Deborah Levy’s 2016 novel of a mother and daughter’s trip to Spain might go with this mix of bourbon, dairy, and citrus—good for parties and groups.
[Hot Milk Punch]

100: Her posthumous work includes “Ariel,” and the “Collected Poems,” which nabbed the Pulitzer in 1982.
[Sylvia Plath]

200: Michelle McNamara spent years investigating the Golden State Killer, which resulted in this book—and shortly after its publication, a suspect’s arrest.
[I’ll Be Gone in the Dark]

300: Written in 1927 and published in 2018, “Barracoon” is this writer’s nonfiction account of the last living survivor of the “black cargo.”
[Zora Neale Hurston]

400: This polymath was a filmmaker, playwright, poet, and a short story writer, whose collection “Whatever Happened to Interracial Love?” was excerpted in A Public Space and Granta.
[Kathleen Collins]

500: His debut proved so successful that he spent four decades on a follow-up. At 1100 pages, “Three Days Before the Shooting…” would be published 16 years after its author’s death.
[Ralph Ellison]

100: DAILY DOUBLE
This 1985 DeLillo work shares its title with a recent Emma Cline story… which features DeLillo as a character.
[White Noise]

200: This Booker winner opens with Justice Clarence Thomas breaking his typical silence to ask the narrator—named Me—”Are you crazy?”
[The Sellout]

300: The eponymous narrator of this work says, “I found my arms and legs were strongly fastened on each side to the ground.”
[Gulliver’s Travels]

400: This Nigerian satirist made history in 1986 when he became the first black African awarded the Nobel in Literature.
[Wole Soyinka]

500: Her novel “Made for Love” features a sex doll named Diane, a billionaire tech bro, and Florida.
[Alissa Nutting]

200: Number 298, once assigned to this religious tradition, is no longer used; Mitt Romney would be pissed.
[Mormonism]

600: Section 999 concerns the general history of these areas, which is typically the purview of science fiction.
[Extraterrestrial worlds]

800: The first director of the FBI modeled the agency’s filing system on Dewey, after mastering it during his time with the Library of Congress.
[Hoover]

200: This breakthrough memoir was originally titled “I Hate Myself and I Want To Die.” Good thing Elizabeth Wurtzel changed her mind.
[Prozac Nation]

400: Literary agent Bill Clegg showed his own writerly bona fides with this debut on his addiction to crack cocaine.
[Portrait of an Addict as a Young Men]

600: DAILY DOUBLE
Huxley’s “Brave New World” features this drug, used to pacify and sedate the population. (Also a song by The Strokes.)
[Soma]

800: Ayelet Waldman’s book on microdosing LSD carries a title that most of us haven’t experienced since January.
[A Really Good Day]

1000: Irvine Welsh explored heroin addiction with his debut “Trainspotting,” and club drugs with this collection of novellas.
[Ecstasy]

200: Poet and essayist Melissa Broder tried her hand at fiction with this book, about a woman’s affair with a sea creature.
[The Pisces]

400: This Latin novel, credited to Petronius, takes its name from the mythical half-man, half-goat.
[The Satyricon]

600: In Diana Gabaldon’s “Outlander” series the infrequent sightings of this creature are thought due to a “time passage” under a body of water.
[The Loch Ness Monster]

1000: You’ll find this mythological creature, often depicted as assembled from other animal parts, in a novel by John Barth, an album by John Zorn, and an episode of “The X-Files.”
[Chimera]

Category 4: NOT ABOUT BASEBALL

200: At first glance Isaac Fitzgerald’s picture book could be mistaken for a manual on playing in the big leagues in Pittsburgh.
[How to Be a Pirate]

400: In “The Old Man and the Sea” Santiago catches this type of fish, which—spoiler alert—doesn’t make it to shore.
[Marlin]

600: Darin Strauss’s “Chang and Eng” is a fictional account of two historical figures from modern-day Thailand who share this relation.
[Twins]

800: This book by Dorothea Lasky and Alex Dimitrov started with their Twitter account, which sends tongue-in-cheek advice to its 600k followers.
[Astro-Poets]

1000: Christina Boyle’s biography of Timothy Dolan references his stature in the Roman Catholic church by calling him an “American” this.
[Cardinal]

600: This Lawrence novel hit the U.S. list in 1959, over thirty years after its publication. (Distribution problems or something.)
[Lady Chatterley’s Lover]

1000: Irving Stone went method and apprenticed as a sculptor for “The Agony and the Ecstasy,” his fictional biography of this artist.
[Michelangelo] 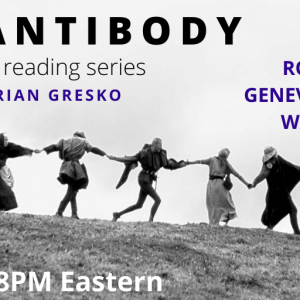 This is episode 13 of The Antibody Reading Series, a weekly reading and Q and A hosted by Brian Gresko. Tonights guests...
© LitHub
Back to top