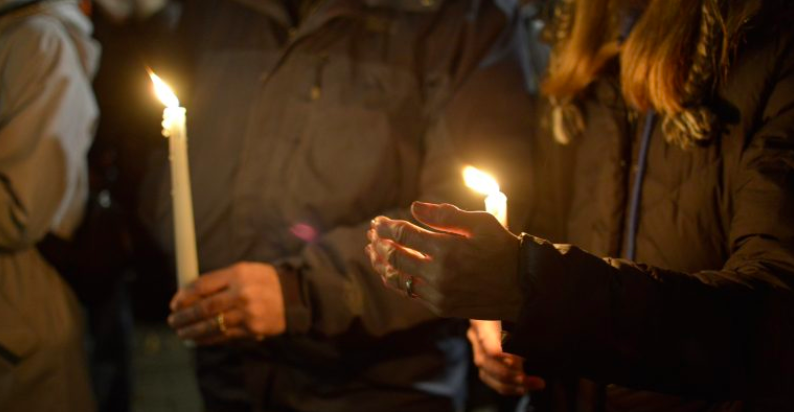 They Don’t Kill Us Because of How We Pray

On Pittsburgh, Otherness, and the Virulence of Antisemitism

For much of my life, I didn’t understand anti-Semitism. I learned that the Holocaust was a historical anomaly, a byproduct of economic and geopolitical factors. I was taught that I was bound to other Jews by religion, not by race. (True, but it’s also more complicated than that.) As a child I dreamed for years about being taken to a concentration camp, but by the time I was an adult, I believed that anti-Semites existed only on the fringe of society, holdouts from a bygone era. Why did they hate us? I never really knew. Hate was its own answer. And because it made no sense, I stopped thinking about it.

In my mid-twenties, I was working at a newspaper in Phnom Penh when one day a European colleague announced to the room that the US didn’t intervene in the Rwandan genocide because “Jews running the UN” didn’t want anything to be deemed genocide except the Holocaust. When I asked what she meant by Jews running the UN, she said she’d read a book about it and therefore knew it was true.

By Jews, did she mean Israeli diplomats? I pressed, trying to make sense of what she was saying. I added that I vehemently disagreed with many of the Israeli government’s policies, that not all Jews support the actions of Israel.

My colleague looked right at me. “Well, maybe that’s what they tell their friends.”

I was shocked, stunned into silence. But soon I moved on, forgot about it. The incident was an anomaly, like the Holocaust. It would take me years to understand what she meant.

Later, I moved to the Midwest for grad school. Growing up on the East Coast, I had taken it for granted that Jews were a part of American culture, that we were white, that everyone at least knew what a bagel with lox was. Instead, I experienced something akin to culture shock in my own culture, or what I’d once thought of as mine.

I was suddenly surrounded by people who had met few Jews before me. I once got into an hours-long argument with a friend who insisted he could tell who was a Jew just by looking at them. (He’d somehow honed this ability on the handful of us he’d met.) When people found out I was Jewish, they often looked at my face and said, “Oh yes, I can tell” or “You don’t look Jewish at all.” More often it was the latter, and it took me some time to realize this was meant as a compliment. It took me longer still to realize that a small part of me didn’t wince, that a small part of me was glad.

In 2014, in a suburb outside the city where I was living, a man shot three people outside a Jewish community center and retirement community, shouting “Heil Hitler.” The people he killed happened not to be Jewish.

I remember little of what I felt about it, likely because I didn’t think about it for very long. What I remember is visiting Jewish friends back in New York and making terrible jokes about it. “He couldn’t even kill any Jews,” my friend said. “Look at history: how hard can it be?”

“There are so few Jews in Kansas City, even when you go to murder people at the JCC, you end up murdering gentiles.”

Like the Holocaust, like the “Jews running the UN,” the shooting was an anomaly, and I forgot about it.

In 2015, I heard a sentence or two on the local news about a Missouri politician—Tom Schweich, running for governor as a Republican—who had killed himself amid a “whisper campaign” that he was Jewish.

Maybe because I’d recently gotten into the hours-long argument with the friend who swore he could tell who was Jewish, maybe because another friend told me she’d discovered old photos of her family in “Jewface,” for once I didn’t forget. But it was hard to find much information at the time, so I stopped looking and soon I moved away.

In the days after Trump was elected, a friend texted me photos of my old neighborhood with swastikas spray-painted on the streets. At the time, I was staying up late reading about ((echoes)) on Twitter (the white supremacist idea that Jewish names “ring out across history”), about racial pseudoscientists like Jörg Lanz von Liebenfels, Guido von List, and Arthur de Gobineau. Jews are at the heart of white supremacist ideology, a favorite professor explained, because Jews are believed to be able to disguise themselves as white. They know they’re in a history-long battle with the white race and are bent on destroying whiteness through the promotion of “interbreeding,” immigration, and multiculturalism.

“In the days after Trump was elected, a friend texted me photos of my old neighborhood with swastikas spray-painted on the streets.”

Among the racist pseudosciences that emerged in the 19th century, Nordicism promoted the idea that there was a “Nordic Race” (also sometimes called the Aryan race) descended from blonde-haired, blue-eyed, mythically tall god-men. (Helena Blavatsky believed Aryans came from Atlantis. Lanz von Liebenfels thought they descended from interstellar beings called Theozoa.) Millenia of interbreeding had brought about racial degeneration. Eugenics and racial hygiene were necessary to get back to the original Nordic state of man. But among all the other “inferior” races, Jews were considered most dangerous: a stateless race (think: “globalists”) who could hide in plain sight, who plotted (and still plot) to promote race-mixing and the idea that race doesn’t matter.

How do we do this? Through control of banking and the media. Through powerful institutions like the UN and the State Department (the Soros-occupied State Department, as a Fox News commentator recently said). In the late nineteenth and early 20th century, these theories caught on in the US, shaping racial and immigration policy as well as the American eugenics movement, which would later influence Hitler.

For the first time, I was beginning to understand the full meaning of “Jews running the UN” I understood what my colleague meant when she said, “Maybe that’s what they tell their friends.” I was dissembling. I was hiding in plain sight.

While other races would eventually be eliminated, Jews had to be exterminated first, Hitler believed, because of this ability to hide, to slip through the cracks of history.

But though Jews were central to Hitler’s worldview, they weren’t his first victims. In 1939, in a secret operation called Aktion T4, the Nazis began systematically killing German infants labeled “defective.” Soon children and adults in asylums—people with disabilities, epilepsy, mental illness—were also being gassed. These people represented the most blatant affront to Nazi racial hygiene. They were called Lebensunwertes Leben: “life unworthy of life.”

I teach first-year college writing, and my students are currently writing about the overlap between extreme ideologies and mainstream beliefs. We’ve talked a lot about white supremacy, but never about disability. A few days ago, a student came to my office and told me she wanted to write her paper on eugenics but was having trouble formulating a thesis. I asked her some questions and tried not to look stunned when she told me she was “pro” eugenics. “Okay,” I said. “Why?”

She pulled up a group presentation she’d done in high school. The entire class had taken a position on prenatal screening and selective abortion—or, in my student’s words, eugenics. “Ninety percent of parents who are told their child has a problem like Asperger’s choose to abort,” she told me, “which means it’s a choice parents want.” (The study was actually about Down syndrome.)

“Can you think of any arguments on the other side?” I asked. I was trying to think of some way to communicate that I too was pro choice while also conveying that we were talking about something far more complicated: whose lives are considered worthy.

I might have told her that my brother has Down syndrome, that the idea that he might not be alive is the most unbearable thing I can imagine. I might have said that in Poland, Hungary, and Lithuania, the same calculus about which lives were worthy had killed much of my extended family. I might have said that just two months earlier I’d attended the Bar Mitzvah of one of the few survivors: my 83-year-old cousin who was pushed into a mass grave along with the entire Jewish population of his town, who later jumped out of a train bound for Auschwitz.

Instead, I waited a minute, then said, “I think people with disabilities might have some problems with the idea that they shouldn’t be alive.” My student looked at me as though the idea that such people actually exist was only now occurring to her.

I spent several days last week repeatedly reading the names of the eleven people who died in Pittsburgh. I keep returning to the names of the two brothers, David and Cecil Rosenthal, both with intellectual disabilities, who spent every Saturday at the Tree of Life synagogue. They greeted people as they walked in. They handed out prayer books. Their sister said of the shooting, “I imagine they probably greeted this guy.”

This summer, I went to Girona, Spain, to research the turn to ecstatic kabbalah that emerged in the same moment of rising violence against Spain’s Jews. I looked at fragments of 13th and 14th-century texts that survived only because parchment was valuable and they had been repurposed: turned inside-out and sewn into the binding of Spanish and Latin texts, sometimes the very texts that set out increasingly restrictive laws against Jews. The fragments were forgotten for centuries. They were hidden in plain sight.

While in Girona, I learned that the yellow Star of David badge enforced by the Nazis didn’t originate in Germany. It originated in medieval Europe, as Jews were alternately welcomed and forced to flee their homes across the continent for the past thousand years. The badge points to an essential problem of how Jewishness resides in the collective imaginary: at once physical—hooked nose, “racialized” features—and hidden. If you need a badge to be identified, where does your Otherness lie? Could my friend tell I was Jewish by looking at me? It’s an Otherness that’s hidden, one that’s afforded us immense privilege even as it’s exiled us and killed us again and again.

Walking down the street hours after the shooting, for the first time since I was a child I wanted something on my body to mark me as Jewish. I remembered my childhood dreams about Nazis, the feeling of knowing suddenly that I had to hide my Star of David necklace. Maybe because in Spain I’d read a lot about numerology, what I thought about now was the symbol chai. I kept seeing it in my mind. I couldn’t even remember what it meant exactly, so I looked it up when I got home. It means alive.

Emily Geminder is the author of Dead Girls and Other Stories. Her work has appeared in AGNI, Conjunctions, Kenyon Review, New England Review, Prairie Schooner, Tin House, and elsewhere. She lives in Los Angeles. 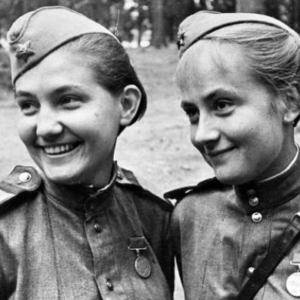 I’d been earning my living as a Russian-English interpreter for a decade and a half when I was hired to give English voice...
© LitHub
Back to top