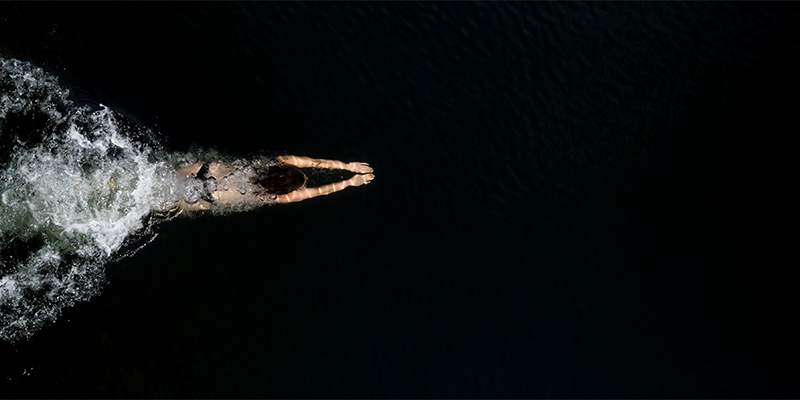 “There’s No Story to Tell About Swimming.” Madeleine Watts on How to Quiet the Mind

I learned to swim not long after I learned to walk. My mother was a habitual beachgoer, and in Sydney, where the tides are strong and the surf can be frightening, you need to be a strong swimmer.

I was taken to swimming lessons every Saturday morning of my infancy, and then, once I started school, every Friday afternoon as well. There was, if I recall correctly, a licensing system. No other Friday afternoon sport was available to you until you had obtained your “swimming license.”

So we would all pile in at lunchtime to a rented city bus, trundle along with sweat sticking our legs to the vinyl bus seats, and arrive at Ashfield Aquatic Center, which was exactly the same, in the ‘90s and 2000s, as it had been when my mother had swum there in the 1960s. Up and down we would go, practicing kicking and breathing, the four key strokes, all the stuff I’d been doing for years and figured I had already nailed. I got my swimming license earlier than most of the other children, and as a reward I was given free range of the diving pool, where I could swim as I saw fit.

Swimming was something I loved. I was good at swimming. But I was never a competitive swimmer, never joined any kind of swim team at school. I didn’t ever care about getting to the end of the lane faster than anybody else, or about trying to improve on whatever my personal best was. I did not then, and wouldn’t now, have a clue what my personal best is. I was competitive when it came to other things, but never sports. I just liked being in the water, that was all.

When I lived in Sydney, finding space and time to swim was never a problem. The pools are plentiful, nearly always open for lap swimming, and they stretch, more often than not, a full 50 meters—Olympic sized. Then there are the beaches and the ocean pools. Wherever I was living, it never cost much to find one somewhere in the city and jump in, swimming 20 or 40 laps depending on how tired I was. For one glorious winter and spring, Prince Alfred Park Pool, near where I was living, let locals in for free, as an apology for the City of Sydney Council taking longer to renovate than they had promised. I swam nearly every day, and then dried off in the weak sun, lying on the long wooden decks.

When I’m swimming, I’m able to lull myself into a trance. I have heard from my partner, a runner, that this can be achieved on long jogs, but it’s never happened to me. I get too distracted by stimuli out in the world. When I’m swimming, I am reduced to repetition. To the count of three: One. Two. Three. Breathe. I decide how many laps I’m doing, and I do them until they’re done. Meanwhile, free of any distractions, my mind is free to flit about over the counts of three, and the breathing. Whatever painful memories might emerge, whatever is stressful and troubling outside the water, slips in, and then slips away. Therapists have occasionally suggested to me that this is the goal of meditation. But the only thing that’s ever worked that effect on me is swimming.

When I’m swimming, I am reduced to repetition. To the count of three: One. Two. Three. Breathe.

Swimming is anti-thought, and I think that’s why it’s important to me. What I do most of the day is think. On a good day, the thinking produces writing. On other days, I am trying to cobble together enough paid work to subsidize the time I need to finish my writing. Often I am worried about not writing. My mind can whirr itself into a tightly-wound knot that is difficult to untangle. The whirr is necessary for producing the kind of writing that I’m happy with. But the whirr is also exhausting. What I like about swimming is that the whirr simply can’t be sustained. I am forced out of my head and into the one, two, three, breathe of the pool. There’s no story to tell about swimming. In the pool, nothing happens.

It didn’t take long after moving to New York nearly a decade ago, to begin to feel like the lack of swimming pools in the city was beginning to drive me mad. I was full of complaint about how small they were, how expensive, how hard to locate. I swam less frequently, and most often in the summer.

So in the dying days of my marriage, when I was losing my mind, I decided to pay for a membership at a gym in Tribeca which had a 25-yard pool—half the size of an Olympic pool, but it would do. The gym was nowhere near where I lived in Brooklyn, and my fortnightly salary of $1200 barely covered rent and food, and certainly not the $155 a month required to use the pool at the gym.

But it seemed like the only thing keeping me from completely unravelling, or, rather, unravelling even further than I already had. I put it on a credit card. Swimming at that pool was surreal, a place of children in designer clothing, and high-end shampoos in the women’s shower stalls, and once, arriving back at the shallow end after a lap, a prominent supporting actor from Mad Men asked if I would like to split a lane with him. I swam at that pool every single day until Covid closed it.

I can get by when I’m not swimming, of course. But I am happiest when I can spend time in the water. I have spent most of the last summer in Berlin, a swimmer’s paradise. There are pools everywhere, both indoor and out, and then there are the freshwater lakes scattered on the outskirts in the ring of Brandenburg.

A few weeks ago, my boyfriend and I took a train into the countryside and walked through the woods to Liepnitzsee. When we found a secluded spot, I changed into my swimsuit and stepped into the water beneath the beeches and oaks, and set out from the bank. A few bodies—many naked—peeped out from between the branches, but all else was birdsong and faint breeze and bluebottles skimming the surface. I didn’t intend to go far, but I found that I had swum out into the lake, and that I thought I could keep going.

When I got to the other side, I pulled myself out onto a different bank with different beeches and different oaks. I stood there looking back at the faint shape of my boyfriend on our blue and white picnic rug, reading a book. Water dripped off my arms and legs and absorbed back into the muddy lake edge. In that moment I felt calm, self-possessed, free. Wiped clean of the too-tangled thoughts. Happy. And then I stepped out into the water and swam back to the bank I’d come from.

Madeleine Watts is a writer of fiction, essays and journalism. Her writing has been published in The Believer, The White Review, Los Angeles Review of Books, Griffith Review, Meanjin and The Lifted Brow, amongst others. She is the winner of the 2015 Griffith Review Novella Competition. Madeleine grew up in Sydney, and sometimes Melbourne, but she has been based in New York since 2013. She has an MFA in Writing from Columbia University in New York, and graduated from the University of Sydney with a B.A. in English Literature. Her debut novel, The Inland Sea, from Pushkin Press, is forthcoming in the US from Catapult. 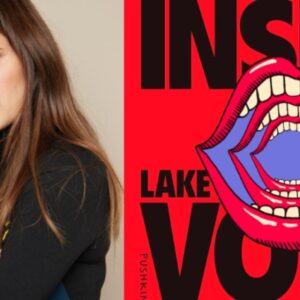