The Wrong End of the Telescope 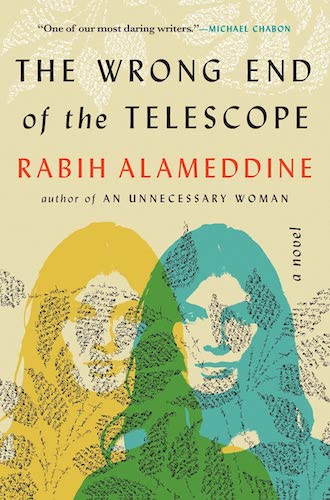 The following is excerpted from Rabih Alameddine's novel The Wrong End of the Telescope. Following the friendship between two women, a doctor in the Moira refugee camp in Lesbos and a Syrian matriarch newly-arrived at the camp, the novel weaves a tapestry of the many facets of a heart-wrenching crisis. Alameddine is the author of the novels The Angel of History; An Unnecessary Woman; The Hakawati; I, the Divine; Koolaids; and the story collection, The Perv. In 2019, he won the Dos Passos Prize.

Sumaiya and her family rode the bus while Emma, Rodrigo, and I followed in the car. Luckily, we’d decided not to take my Opel that morning. Emma’s rental Honda was much more comfortable. In the back seat, I suddenly felt exhausted and sluggish. Drowsiness overwhelmed me. Talking to me through the rearview mirror, Emma suggested that I close my eyes for a bit. It would be at least half an hour before we reached Moria. I fell asleep before she finished her sentence.

I dreamt of my mother, of my father, of sitting before them as an adult, all of us underwater in the Mediterranean, something like that, everything fleeting and hollow. I heard strange knocking noises, as if I were in an aquarium with some child knocking on the glass, my head echoing back. And indeed it was a child who woke me—or rather five of them—four boys and a little girl, all in clothes that had seen better days if they’d ever had a good one. The kids stepped back from the car as soon as I turned, all of them giggling. I’d slept for hours, my head leaning against the rear window.

I had a text from Emma explaining that she thought it would be best to let me sleep, that I should come to the camp when I woke up and call her. I stretched my arms, used the car’s roof as support, which made the children laugh louder. I got out of the car, asking them in Arabic if there was something wrong or if they found me generally amusing. The eldest boy, no more than eleven, clad in a multiyarned sweater, explained that I was snoring loudly. He could hear my snoring through the car window, he said, but not his friend and lieutenant, pointing to a younger boy, because his ears were filthy. His ears had so much dirt, the eldest boy said, that you could grow wheat in them and make bread. The other boy, whose ears did not seem any dirtier than the rest, was not amused.

It had rained sloppily while I slept, and all the cars parked along the road were still dripping. Shreds of frayed clouds congealed into a dark, menacing mass, covering the light with thickets of moisture. The shadows around me grew fainter.

The children asked me where I was from, then introduced themselves. The leader, his lieutenant, and another boy were from the Aleppo area. The fourth boy was all the way from Pakistan and didn’t speak Arabic, but he was fun nonetheless, and the blond girl clad in strident colors was from Iraq and didn’t say much because she was shy, but she had to be in the club because the leader’s mother would beat him up if he didn’t allow girls. And what did their club do? Well, it was formed only that morning, so their objectives were not entirely clear yet, but the main reason for the club’s existence was mischief making, as in his mother told him to take his friends and make trouble for other people not her, if he knew what was best for him, and of course he knew. Could they take me into the camp to meet my friend? Of course they could, and not only that, they would explain things to me since I was obviously new, but it was going to cost me. No, not money but a whole chocolate bar, or two since there were five of them, and of course they knew I didn’t have chocolate on me. I didn’t even have a purse, but I could buy candy at one of the cantinas over there, the boys said. The big one facing the gate had the best chocolate; the owners had given them two bars that morning for picking up all the paper cups and putting them in a garbage bag. Had I ever had coffee out of a paper cup? And it was hours ago since they had chocolate and they were five and it was only two bars, and they could tell me all kinds of things about Moria, the camp to my right, not the city in The Lord of the Rings, but they could even explain the movie to me if I wanted, so I should buy them chocolate bars, of course I should.

Cars and vans were parked bumper-to-bumper on both sides of the narrow road. The Iraqi girl took my hand in hers. I thought she was following the universal edict of handholding when crossing the street, but then one of the boys grabbed my other hand. They were escorting me across, guides safariing me through this frightening savannah, making sure I wouldn’t be attacked by a feral car. We passed a couple of wobbly snack trucks parked along the road; the boys called them cantinas. Apparently there were gypsies the day before, selling new and used clothing out of the back of a truck but nothing nice. We had to maneuver around the numerous cantina patrons, primarily Syrians as far as I could tell but at least two African men and one South Asian, almost all smoking and drinking coffee. Quite a number of them were charging their cell phones. The cantina sold everything anyone in the world could ever want, the boys explained. Did I need a phone, a sim card, coffee, sugar, a sandwich, a foul-tasting banana ice cream, a much-too expensive soccer ball, a Messi T-shirt, anything my heart desired. And chocolate bars, I said.

I bought them five. I had to. The Greek owner, a woman in her forties, suggested that I shouldn’t have because they’d had too much sugar. She’d given them each a bar that morning, free of charge, after which they began to persuade her customers to buy them more. She’d lost count of how many bars they’d devoured. The little tricksters preened. I expected to find canary feathers stuck to the chocolate smears around their lips. When I asked the Iraqi girl how many chocolate bars she’d had, she put up four fingers.

Immediately within the gate to the refugee camp across the road was a large police van, its motor idling, its color a blue so gloomy as to be almost black. I couldn’t look at anything else for a minute. It was a beacon of dark in the light, a big blob of bad color. The kids, still savoring the chocolate, stood on either side of me looking at the same van. They were so big, one of the boys said, pointing at three policemen in full riot gear smoking beside the van, helmets off to make it easier for cigarettes to couple with lips. They had not laid their polycarbonate riot shields down. Big boys with machine guns, batons, vests, neck protectors, knee pads—yes, body armor made your ass look fat. They didn’t speak English, another boy said, or Arabic. They didn’t talk except to each other. The cinder block wall next to the gate shouted defiantly: NO BORDERS NO NATIONS in red graffiti.

I told the children that I could go in by myself; they did not have to be my guides. But they insisted. I needed them, they said. And we had made a deal. Once more they held my hands and led me across the road. The camp was contained by high concrete walls and chain-link fencing, all capped with concertina razor wire, giving it the air of a high-security prison gone awry because there were hundreds of pup tents in the olive grove outside. There wasn’t enough space inside, the boy leader said. There were more refugees outside the camp than inside. The Pakistani boy slept with his family in a tent in another olive grove on the far side of the camp. The boy leader told the Pakistani boy that we were talking about him, before turning back to me and complaining that they couldn’t understand each other and that created a strain in their relationship. One of the Syrian boys told me that his family had to sleep in the open air the first night because they couldn’t afford to buy a tent, which was bad because of the cold and lots of ants, but they were moved into the camp barracks the second night, and they were going to Athens on a boat tomorrow, so everything was all right. They explained that all of them would be leaving within a week or two except for the Pakistani boy, and they weren’t sure how he could survive without them.

Slight rain welcomed us as soon as we entered the gate, slight enough that the children hardly seemed to notice it. The three policemen didn’t seem to notice either the rain or us; Cerberus they weren’t. These were policemen, the boys said. This was a van, this building was for camp administrators, and they had their own bathrooms. These families were going to the bus that would take them to the ferry that would take them to Athens and then by train to Europe proper. The ship to Athens was huge and was completely safe.

Excerpted from The Wrong End of the Telescope © 2021 Rabih Alameddine. Reprinted with permission of the publisher, Grove Press, an imprint of Grove Atlantic, Inc. All rights reserved

There is now an enormous portrait of Fyodor Dostoevsky in a wheat field in northern Italy. 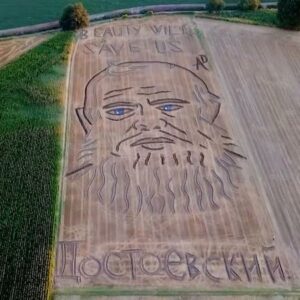 There is now an enormous portrait of Fyodor Dostoevsky in a wheat field in northern Italy. You might think you love Dostoevsky, but do you love him more than Dario Gambarin does? To commemorate the writer's 200th...
© LitHub
Back to top