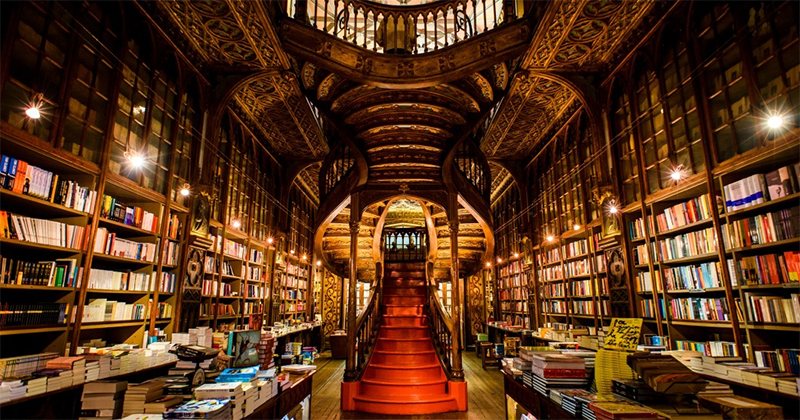 The World’s Most Beautiful Bookstores, Gathered in One Place

Katie Orphan Reports from a Conference of Booksellers in Portugal

The first thing I noticed upon entering Livraria Lello in Porto, Portugal was its famed staircase. Curvy and red, it rises from the floor as if by magic. Word has it that J.K. Rowling herself was inspired by it when creating the world of Harry Potter and the magical library at Hogwarts. It’s no wonder Livraria Lello has made countless lists of the most beautiful bookstores in the world. I realized that at that moment, I was the person I often dread—a bookstore tourist. The bookstore I run in downtown Los Angeles, the Last Bookstore, is also a tourist destination and photo opportunity, as well as a neighborhood bookstore.

But I was here to learn.

Many months before, I received an email from the staff at Livraria Lello asking about my interest in forming a group of the world’s most beautiful bookstores. As a reader and lover of bookstores, I find every bookstore beautiful in its own way, from neatly organized displays to dusty towers of books leaning precipitously in used bookstores, but a handful of us around the world keep ending up on press lists of beautiful bookstores. I said yes, curious about what the bookstores who appear on those lists could have to say to each other. Then, in the early spring, I was invited to attend a gathering in Porto. 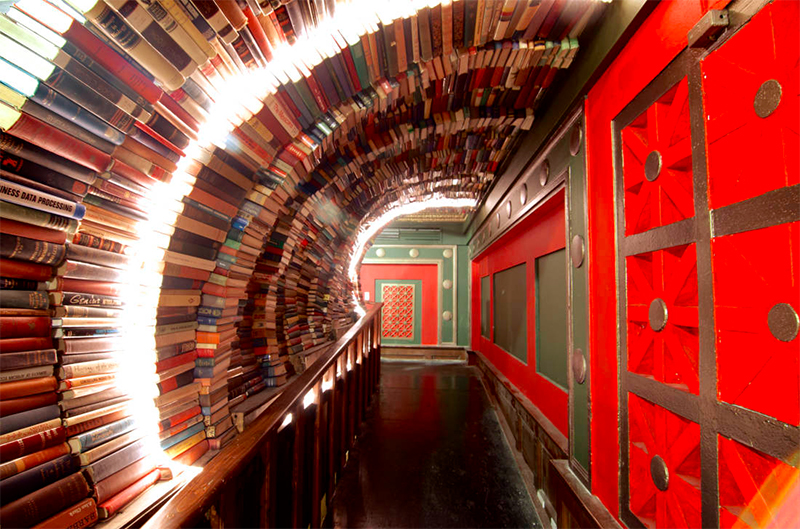 Even though Livraria Lello extended the invitation to bookstores around the world, only those in North America and Europe agreed to attend. The other bookstores rounding out the list of attendees were Bart’s Books in Ojai, California, Daunt Books in London, Shakespeare & Co. in Paris, Cook and Book in Brussels, Boekhandel Dominicanen in Maastrict, Netherlands, Libreria Acqua Alta in Venice, and Atlantis Books in Oia, Santorini—and of course, our hosts Livraria Lello.

I love gatherings of booksellers and eagerly attend my regional trade conference and the larger conferences when I’m able. The chance to attend an international gathering was especially exciting. It seemed to me those invited would have similar experiences about how to balance being a neighborhood bookstore as well as a place for photographs, so I looked forward to talking about how other stores had handled their beautiful status.

Livraria Lello, I learned, has a creative solution to that problem. They charge admission to their store, and the ticket price is applied toward the purchase of any merchandise a visitor buys. Other bookstores, like Shakespeare and Co., don’t allow photography at all. The ability to discuss those decisions with the bookstores who had implemented them was one of the great opportunities of the gathering.

As soon as the booksellers gathered together the first night, we began discussing our bookstores with their unique challenges and rewards. All of us in attendance love selling books, as became abundantly clear. We also faced challenges that arose not only from having heavily tourist-based sales, but from the changing trends in bookselling.

The next morning, we gathered at Livraria Lello to kick off their World Book Day festivities. The Portuguese ministers of Culture and Education joined us to talk about literature and Livraria Lello. It was a thrill to have our gathering deemed so important not only by the people of Livraria Lello, but also to have the role of a bookstore esteemed so much by the leadership of Portugal.

Each bookstore, I learned, shelves its books and uses its space in different ways. The variety of ways in which each store functions opened my eyes to the ways in which readers relate to their neighborhood stores. 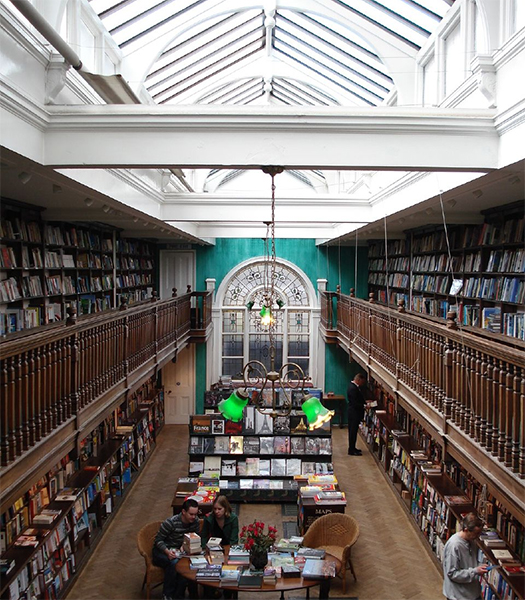 Daunt Books, for example, arranges books by country, which makes a wonderful kind of logic. Fiction and nonfiction both are arranged by locale. As someone who loves literary tourism, it seems like the perfect way to lay out a store for those who want to read about the places they intend to visit. 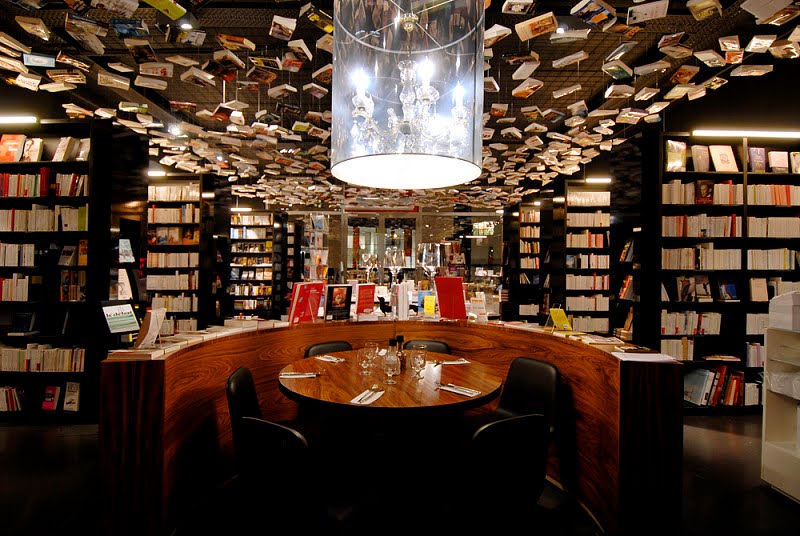 Cook and Book in Brussels takes the idea of a bookstore café one better by having their entire store function as both restaurant and bookstore. Each room of the shop features a genre of books as well as dining space. I could picture diners accidentally bumping into shoppers as they slide out from the tables, but they manage in such a way that allows them to rely, and profit, on revenue from both sources. 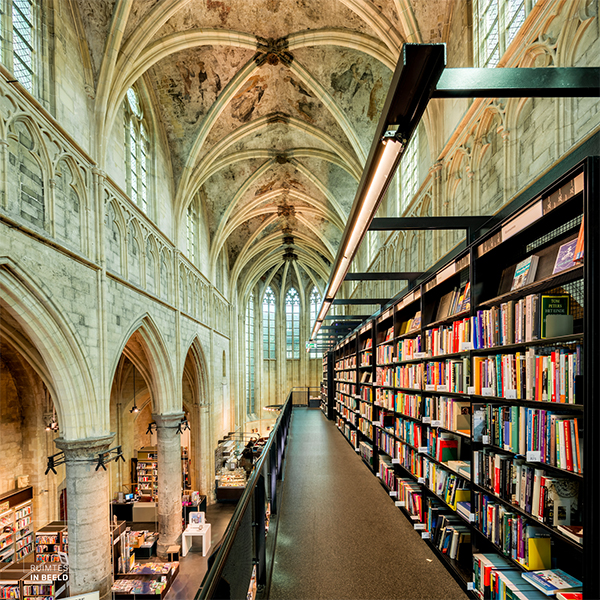 Boekhandel Dominicanen brought good news from the Netherlands, where Amazon is not allowed to sell books below list price. That restriction allows all booksellers, whether online or a physical store, to function on an even playing field. The issue of how to appeal to readers who might use one’s store as a showroom for what they’ll later buy online wasn’t one that had to be considered for them.

For many of the bookshops, turning to publishing their own works had become an important source of both marketing and revenue. Atlantis Books had the broadest catalog, from their own guide to Santorini and staff-written cookbook, to single short stories perfect for tourists with weight restrictions on their luggage. Shakespeare & Co. had just recently published a history of their shop, which we were selling successfully back in Los Angeles. 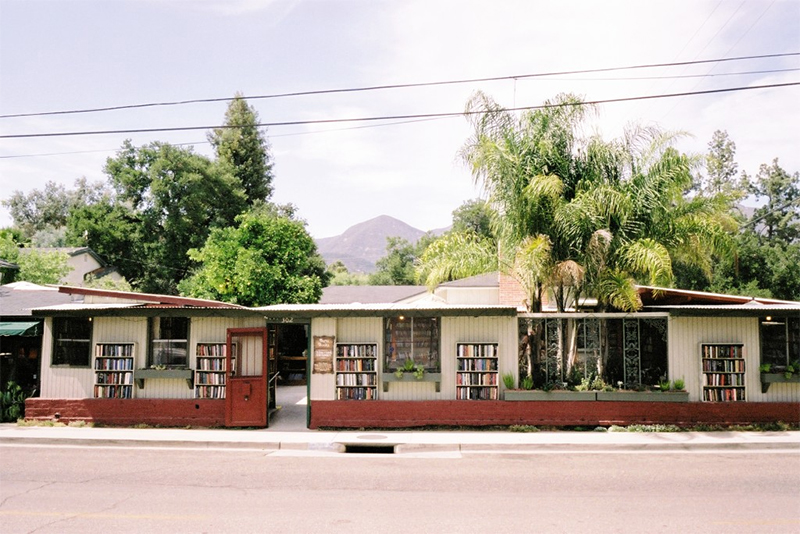 For some of the bookstores, like ourselves and Bart’s Books, turning to rentals has been a source of success. Being in Southern California undoubtedly helps us to book commercial, television, and feature film shoots, and figuring out how to charge not only for lost sales but for our customers’ inconvenience was a fruitful topic.

Throughout the meeting, I took notes of the ideas that were shared that made sense for us to implement in our own way at the Last Bookstore. We’re in the process of working on more of our own publications, with the advice and guidance of Craig Walzer from Atlantis Books. We’re not quite planning to charge admission, but that hasn’t stopped the daily phone calls from potential visitors asking if we do.

Our official time together on these topics felt like it wasn’t quite enough for any of us, but we knew that our dinner that evening would continue those same vital conversations. As booksellers, there’s always more we can learn from one another. We’re already planning our next meeting. I wouldn’t miss it for the world.

Where Are the Likes? Coming to Terms with Being a Writer on Social Media 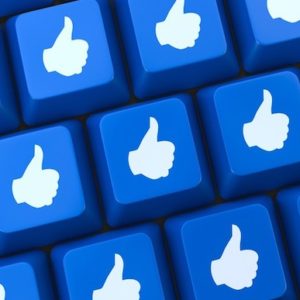 Where Are the Likes? Coming to Terms with Being a Writer on Social Media

Writers, has this ever happened to you on social media? You share the good news that your story, poem, or essay has been...
© LitHub
Back to top
Loading Comments...