The World is Wrecking Our Hearing and We’re Letting It

I first met Lara three weeks after the morning she awoke to the sounds of “whooshing and jingle bells.” For a couple of weeks she had been noticing these sounds intermittently, but by the time she walked into a tinnitus support group meeting in a suburb of a large Midwestern city, they were a nearly constant presence. She had spent the past week in a state of anxiety, asking questions familiar to all of us who had gathered that day in a public library meeting room: “Why is this happening to me? Will I be like this forever?” These questions had led her to the support group, but she already had some tentative answers in mind. Lara told us she knew what tinnitus was because she was once a patient care coordinator for Miracle Ear, calling the hearing aid company’s patients, reminding them about appointments, and answering their questions over the phone.

During training she had learned that tinnitus often accompanies hearing loss. Lara associated the condition with old age and hearing damage, and she knew there was no medical cure. “I never thought that I would be one of those people,” she told the group. Earlier in the week, she had visited an audiologist, who found that Lara did exhibit hearing loss and told her that hearing aids would help with the tinnitus, partially suppressing it by amplifying environmental sound. “I ordered hearing aids in my color—brown,” the Jamaica-born 55-year-old told the other wise all-white group, laughing.

But while Lara attributed the tinnitus to her body “falling apart” with age, she sometimes referred to a different cause as well, one she succinctly described to me as “the music, man!” She first raised the issue of loud music during the support group meeting: “I was the one at the concert standing after the meeting, Lara worked next to the speaker. We didn’t know we were harming ourselves.” During a phone conversation we had a couple of weeks after the meeting, Lara worked at untangling thoughts and feelings in which—at least to my ears—tinnitus, mediated sound, personal responsibility, and disability all seemed knotted together. Like most of the tinnitus sufferers I have met, she was highly self-reflexive and sensitive to her own experience. Yet for someone newly experiencing anxiety over tinnitus, Lara also had an admirable ability to revel in life’s joyous and humorous moments. She started talking about music because of a party she had recently attended:

Last night I went to a party and, of course, the music was blaring. And I didn’t remember I had tinnitus until I got home. Which was kind of cool, you know? I didn’t focus on it. I didn’t think about it. I was just having a good time. The power of the mind is awesome if we use it to the capacity that God allows us.

My daughter asks me this all the time, “Why do you worry so much?” Well, it’s a part of me, it’s a part of my makeup, it’s what I do. But if you take life as it comes and don’t focus on it so much—stay busy and do other things to divert your attention—then it’s not so bad at all. So this is how I’ve been dealing with it. I say to the tinnitus, “You’re not going to run my life. You’re not going to defeat me.” Focus on living and not focus so much on, “Okay, I have a disability.” ’Cause I think it’s a disability. Do you?

I was uncertain of how to respond to Lara’s question. It was early in my fieldwork and this was the first time anyone had raised the term “disability,” yet the word rang true for me—in more ways than one.

Weirdly enough, just a few months earlier, a bicycle tire burst only inches from my left ear when I overfilled it with air at a gas station. The gunshot-like sound was loud enough that I saw people turn their heads two blocks away—and my own head was ringing with a volume I had never experienced before. As a rock musician who had been careless about hearing protection, I already had a certain level of tinnitus, but now I felt dizzy, faint, and sonically detached from my world. These feelings subsided over the next few hours, but the ringing persisted, at a somewhat reduced volume, as I began my already-planned fieldwork on tinnitus.

I felt afraid of the sound and its potential impact on my life, angry over how stupid I had been, and regretful about the damage I believed I had done to myself—in other words, I was suffering from tinnitus. And now my fieldwork was going to force me to dwell on the sound, to confront it as an object of study. It was as if the phantom perception of tinnitus wanted to make sure I achieved real anthropological “immersion.” Fearful of being perceived as neurotic, I decided not to tell people about my current suffering. When I went to support group meetings and did interviews, I described my tinnitus only as the lingering but manageable effects of my earlier days in music.

Now, on hearing Lara’s question about disability, I was torn between the human desire for an open conversation between two people battling noises in their heads and the ethnographic desire to hear more of her opinion before introducing my own. It also dawned on me that I had never considered disability in connection with tinnitus—and in fact, I had no working definition of “disability” at all. (I correctly foresaw a lot of additional reading in my future.) “You know, I guess . . . ,” I stumbled, “I haven’t thought about it like that. But I guess if it disables you from doing certain things, then I guess it would be a disability?”

It’s a disability because it’s occurring to us, happening to us. I would say it’s a disability because a disability comes in where . . . you’re not yourself because this thing is happening to you. It’s not the norm. It’s not the usual occurrence for every one, every day. It’s something that was thrust upon us because, um . . . you know, we didn’t take care of our hearing. [Here we both laughed.] You have a similar story to mine—the music, man!  I’m a music person. I’ve always been. You talk to a hundred or a thousand people [with tinnitus] and I bet they’ll tell you the same thing—that it was the music.

Later, listening back to the digital file of our conversation, I heard in Lara’s words two strands of belief in personal responsibility, both ambivalently tangled up with media use.

The first strand is the belief that individuals are responsible for protecting their own hearing from the effects of mediated sound. Lara both takes on and disavows this responsibility. She believes that “we didn’t take care of our hearing,” but also that, as she said at the meeting, “we didn’t know we were harming ourselves.” The second strand of personal responsibility involves “divert[ing] your attention” from “worry”—in other words, managing one’s own attention and affect, and in so doing, managing one’s own life and resisting emotional “defeat” by tinnitus. Here, media use comes into play as a useful tool: the blaring recorded music at the party helped Lara realize the power of her mind to ignore the sound of tinnitus and the worry it had been causing her. But again, Lara is ambivalent about this responsibility as well. Tinnitus might instead be a “disability” thrust upon her, one that has made her something other than herself. And if she is no longer herself, can she still be held responsible for her reaction to the sound that has changed her? 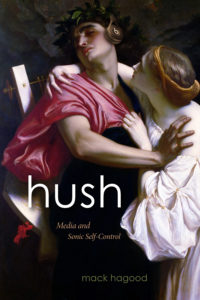 From Hush: Media and Sonic Self-Control. Used with the permission of Duke University Press. Copyright © 2019 by Mack Hagood.

'Some Transcendent Addiction to the Useless,'A Poem by Kay Ryan

The Island That Inspired Conrad and Lawrence's Queerest Characters 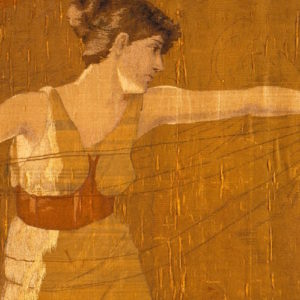 'Some Transcendent Addiction to the Useless,'A Poem by Kay Ryan

–George Steiner, The Poetry of Thought Unlike the work of most people you’re supposed to unthread the needle. It...
© LitHub
Back to top
Loading Comments...