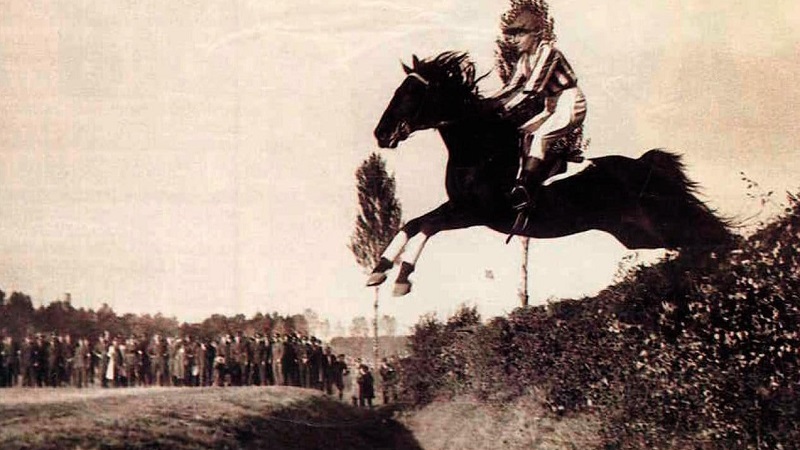 Lata Brandisová Probably Would Have Also Punched Them

Amidst growing enthusiasm for horse racing among Czechoslovak patriots, President Tomáš Masaryk himself was persuaded to visit Velká Chuchle in May 1931, where he watched Jiří Esch ride Oskar to victory in the Czechoslovak Derby. It was a big coup for a little course.

They had long ago created a race—the President of the Republic’s Trophy—in Masaryk’s honor. He, in turn, had made a conscious effort to associate himself with his countrymen’s equestrian traditions since becoming president, and was often photographed on horseback. But he had never yet been to the race. His presence was a boost both for the course and for the notion that horse racing was in some sense the young republic’s defining sport. Lata, who was at the meeting, may well have been introduced to him.

Later that month, Masaryk was in Pardubice to open a four-month-long exposition, nationwide but centered on the town, that celebrated physical education and sport. It was the biggest such event in Czechoslovakia’s history, with 320 exhibitors and 190 events, including one celebrating the Velká Pardubická. Lata Brandisová is thought to have been among the 1.25 million visitors who attended.

Both town and race reveled in the attention. The scale of the proceedings showed just how far Pardubice had come. The new Grand Hotel opened on the same day as the exposition, with Masaryk as its first guest. Europe’s glittering classes followed, and many liked what they saw. Pardubice had so much to offer. The hotels were palatial: the Grand, the Veselka, the Sochor. The main avenues were wide and stately. The public architecture was magnificent. There were banquets, balls, concerts, gourmet restaurants, a magnificent theater, a busy casino and some very upmarket shops. And—in contrast to Prague, or Vienna, or Baden-Baden, or the French Riviera—there was the mad annual rite of the Devil’s Race to justify the pleasure-seeking.

Elsewhere, recession and rancour had begun to gnaw at society’s fabric. The fact that the Velká Pardubická was so extreme—the fact that only the bravest would expose themselves to its dangers—somehow made it feel like an appropriate form of escapism. None of life’s certainties was guaranteed any more. Why not risk everything for a few brief moments of thrills and glory on the turf—or, if that was beyond you, at least come along and join the death-defying party?

By October 1931, it seemed as though half of Czechoslovakia wanted to come along. It was the fiftieth running of the race, and what had once been a cult pursuit for a privileged few was now widely seen as a national sporting ritual. Everyone who could afford to took steps to taste the magic. A new four-storey grandstand, concrete and roofless, had been built alongside the old wooden one to accommodate extra spectators. It was just as well. On race day the road to the racecourse was choked with cars. Streams of pedestrians overtook them on both sides: many had reached the town on a special fast train from Prague.

Gyi Lovam! was not running. Popler was still resting him after his English exertions. But Popler himself was there, riding another of his own horses, Gibraltar II. Ra had two runners: Norbert, ridden again by Lata; and Pohanka, a dark five-year-old mare (by Nedbal out of Piacensa), ridden by the French cavalry officer Lieutenant François Durand. With nine other runners, including two others with Velká Pardubická experience, the race was both open and competitive. Lata’s presence no longer seemed exceptional: at least, no one seems to have deemed it worthy of special comment. Perhaps they would have done, had they known what would follow.

The weather was fine, but the autumn had been wet and the course was waterlogged. The race was not so much a struggle between horse and horse as one between horse and nature. The mayhem began before they had even reached Taxis: at the third obstacle, the Little Water Jump. Tuss, ridden by Antonín Albrecht, was first to arrive but jumped sideways at the last minute, bringing down five other horses.

Lata and Norbert, who had started at a slower pace, were among the seven who avoided the pile-up. Taxis was relatively trouble-free: Talán refused, but the rest cleared it safely. Renonce—or at least her jockey—came to grief at the Irish Bank, and although there were multiple remountings (and refallings) by the earlier fallers, by the time the runners came back from behind the woods to head past the stands and towards the big ploughed field section, there were just five of them left: Gabarit, Norbert, Gibraltar II, Pohanka and Széles II.

Just over half of the race remained. Lata must have felt, once again, that she was in with a chance. Then they reached the fields.

It was like Passchendaele. It was madness to race on such mud. That didn’t stop them trying. Sometimes they sank in so deep that even a trot was a struggle; in places they slowed to a walk. By the time they got back to the racecourse proper, it was a challenge to keep going at any pace. No one attempted to jump the Snake Ditch: they waded through instead. Even this presented problems. Gibraltar II got water in his nostrils, and there were fears that he might drown. At the Big Water Jump, the exhausted Norbert struggled to get out of the water. The only horse to complete the course without mishap was Pohanka—who, as a result, won by an enormous distance. The other four contenders trailed in eventually, bedraggled mud-figures, shivering with fatigue. As one commentator observed: “Everyone was glad that the race was over.”

Once again, it is hard not to question the humanity, let alone the sanity, of racing in such conditions. We can only remind ourselves that, by the standards of the time, this was considered the right thing to do. Decent riders would not push their horses indefinitely. At Aintree, for example, Popler had conceded that Gyi Lovam! had had enough, even though he himself would have loved to continue. But ideas of what constituted “enough” in 1930s Pardubice were different from ours. In the riders’ defense, they spared themselves no more than they spared their horses.

Lata took her share of punishment but coped better than most. Norbert fell twice, refused once and unseated his rider once. The heavy ground must have softened the impact for both of them. Lata remounted each time. Yet again, she finished. Not only that: she finished third. A post-race photograph shows her talking to two fashionably dressed ladies, each wearing a fur stole. Bedraggled or not, she is smiling so widely her face seems about to burst. The battering she has just taken appears to have slipped her mind.

The grimness underlined Lata’s achievement: she had proved that a woman could be tough enough and skilled enough to complete the course, when highly trained military men could not.

Her glory was eclipsed by the triumph of Ra’s other horse, Pohanka. For some, it was also overshadowed by the grimness of the race as a whole. Yet the grimness underlined Lata’s achievement: she had proved that a woman—or at least this woman—could be tough enough and skilled enough to complete the course, time after time, when highly trained military men could not. Not only that: she was getting better. Fifth, fourth, third: place by place, year by year, she was getting closer to the great prize.

After this, it was rare to hear anyone question the propriety of her participation. She had grasped early on that to win the respect of the male riders who resented her, she had to pay her dues. “Like any novice, I had to prove myself.” Now she had done so. Even the most traditionalist cavalry officers had to accept that she was no more out of her depth than they were. Popler positively admired Lata by now. He is said to have been impressed by her resilience and grace, and to have envied her ability to bounce up from falls, seemingly unhurt, “like a cat.”

By one account, his feelings extended to the kind of admiration that a romantic soldier traditionally feels for a beautiful, unattainable woman of “extraordinary grace”: not love, nor lust, but a kind of courtly devotion. That may have been wishful thinking on his biographer’s part. It is clear, however, that Popler and Lata were now on friendly terms. It is also clear that honor-conscious officers no longer felt compromised by the company of what the German press were soon calling a “courageous Amazon.”

She was not yet a national hero, but she was becoming the next best thing: a national treasure—a strange quirk of Czechoslovak life that her compatriots, notwithstanding her German-speaking background, were happy to claim as their own. 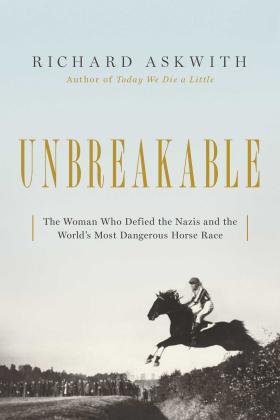 Excerpted from Unbreakable: The Woman Who Defied the Nazis in the World’s Most Dangerous Horse Race. © Richard Askwith 2019. Reprinted with permission from Pegasus Books.

Tangled Histories of Family and Empire, England and Jamaica

How Can You Know What Your Dog
is Really Feeling? 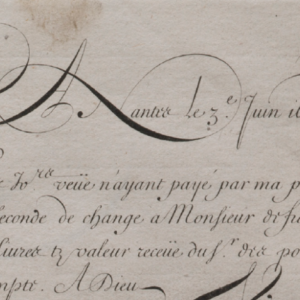 Tangled Histories of Family and Empire, England and Jamaica

My father has, or more accurately used to have, beautiful handwriting. The headmistress at my secondary school, a Miss Pym,...
© LitHub
Back to top