The following is excerpted from Lucie Elven's debut novel, The Weak Spot, about a woman who discovers something toxic at work in the isolated village where she is apprenticing as a pharmacist. Elven has written for publications including The London Review of Books, Granta, and NOON. The Weak Spot is her first book. She lives in London.

The river moved quickly for such an unrushed place, curling around the base of the mountain, and at the crest of the town lay the golden side of a ruined abbey. A graveyard hung behind it, falling like a veil, two stones here, three there, others farther out dug into the rock face and jagging horizontally over the precipice, as if these sidelong burials had been a punishment for crimes.

Between the fir trees, long light-headed candles extending out of the steep incline, a passage had been carved out for the funicular. As it wound up its ancient, ticking mechanism, another car was coming down. We passed it in midair: a man chatting between two police officers and a woman standing by the driver. The light on them looked as solid as drapery. Even on such a blue day you could tell this sky had a knack for breaking into storms.

It was almost the time of my appointment with Mr. Malone when I arrived at the square with the pharmacy, a corner building so fastidiously closed it looked folded up. I stood in the middle of the plaza and turned in a full circle so that the houses rotated around me. Their second floors, which must have been the most desirable when the town was built, had shutters that were taller than those on any other floor. Above them in some cases were rows of square windows. I was thinking of my mother, for whom the third floor was the one that was tiring to get to, the floor that was a mystery, where any dangerous transformation might be happening to me—but I lost hold of her when I saw a dog trotting along the edge of the square. On its trail was a pair of shoes clacking loudly. It was Mr. Malone, with sunglasses on, whose face was bronzed and rich compared to his photograph on the Institute website. The dog, followed by Mr. Malone, took a corner into an alley off the square to the right of the pharmacy. The dog kept on to the end and Mr. Malone seemed to speed up, then stopped himself and watched it go. He reached into his jacket pocket, and unlocked a side door. A minute later, with a grinding, the shop’s metal security grille cranked up.

Inside, wearing his white coat in front of the counter, Mr. Malone said, “Tell me about yourself.” He followed up with questions like, “Why did you choose this town? When did you decide to train as a pharmacist?” I studied him. He was a large man of around fifty with an upper lip that dropped beautifully over his mouth. He looked unregulated and liable to weep yet also orderly, a wardrobe out of whose stuffed shelves coats and pillows would tumble if you opened the door without care.

It started there, at the beginning of our relationship, as soon as we met. Maybe it was because I’d seen him captivated by the stray dog, and I knew he was behaving differently now he was on his guard. I didn’t tell him anything.

The river moved quickly for such an unrushed place, curling around the base of the mountain, and at the crest of the town lay the golden side of a ruined abbey.

I didn’t say that I had been near the town once on holiday when I was a child. My uncle had taken my mother and me on an interminable walk. We were on a path around the mountain but, as a joke, my uncle had lied, and told me we would be heading right up it. It was so foggy that we couldn’t see where we were going. Every so often, he would point into the mist and announce, “Look! We’re getting closer!” As we went, he had overpowered us with stories about a mythical monster local to the area that devoured humans neck-first, about a nun who had turned into a hillock, about the black sheep of the family, who had moved to a house nearby and pinned live flies under the needle of a gramophone so that they were slowly dismantled as he listened to Ravel. Later I learned that it was a part of the country that deviants ran away to in books, a place for murderers, thieves, and alcoholic former lawyers to lie low, a landscape full of abrupt drops, deep craters, boars, snakes, and wolves—a vast, sleeping boundary, a safe haven. At the end of my studies the town had appeared on the list of possible places to train. I wanted to see if I could measure up to this wildness. No one had quite said I couldn’t, so I applied.

As for why I wanted to be pharmacist at all, that had no answer I was able to share with Mr. Malone.

While I responded in a deliberate monotone, guessing at what I might be expected to say, he interjected to check that he had understood a point or to ask about my private life. He told me to read my list of queries about the position aloud, rather than raise them one by one. He said he hoped that some link between my areas of uncertainty would lead us to an interesting topic of conversation. He asked if I knew the process for being approved by the pharmacy board after his two-month mentorship. He answered his own question: on his recommendation, I would interview over several hours with several more members of the Institute, after which two separate people had to approve me. Only then would I be allowed to run my own pharmacy.

Mr. Malone seemed to be snapping at me and cutting me off because he had already decided that I was not ready for the role. By all rights, I shouldn’t have inserted myself into this thin-aired, close-knit mountain town—to me just a shapeless place where I felt something had been interrupted. My decision had been unrestrained, reckless. He mentioned that some people prefer to wait until they have children before training, then apologized for presuming. I explained to him that I had a strong instinct that this was what I wanted to do, and he said, yes, that came across, I clearly had profound emotions about it. I must have looked desperate as I explained I wasn’t usually wrong when I acted on this sort of impulse. Something flickering entered his eyes. He asked me if I had any more questions, and I paused for as long as I thought would convey my ability to abide an uncomfortable situation, then said no. He disappeared down a forest-green corridor into a back office.

When I’m angry it is often a sign that I am trying to work something out, and this was surely happening now. I walked down the aisles and stared at a display of baby bottles, trying to draw a practical conclusion from this discouraging introduction. After all, he had struck a chord when he agreed about how important this opportunity was to me. He had created a deep trench of feeling in the room during our conversation.

But then Mr. Malone came back into the front of the shop.

While I responded in a deliberate monotone, guessing at what I might be expected to say, he interjected to check that he had understood a point or to ask about my private life.

He was briefly generous in explaining his philosophy. He believed that a pharmacist’s role was to enhance the locals’ potential by listening skillfully. When he was a child, Mr. Malone said, he had told his parents he wanted to restore old cities. The town was forgetting itself year on year and the municipal authorities did such a careless job preserving its dignity and protecting the habits of the community that young women, especially, were moving away. When they visited their families, they had new sing-song voices, as though they were on the radio, which seemed a betrayal to the older generation. The world was changing fast and people here always felt their efforts to keep up were a little off. They were trying to attract a new doctor, as the last one had retired to the city. Patients had to attend appointments over the internet, which was slow. Only that morning the mayor had been arrested. He was facing accusations of tax fraud. That was why our work at the pharmacy was particularly necessary.

Mr. Malone said that when the bell over the door rang, I was to experience customers’ needs more urgently and their disappointments more keenly than my own. I was to ask them what they were hoping for, about their ambitions, and I was to remember all those details for the next time they came. Then his level of emotion went from overflowing to nothing. His face became a window with drawn curtains. He retired again to the back office.

A Pho Love Story by Loan Le, Read by Ryan Do and Vyvy Nguyen 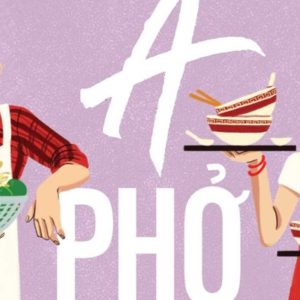 A Pho Love Story by Loan Le, Read by Ryan Do and Vyvy Nguyen Every Monday through Friday, AudioFile’s editors recommend the best in audiobook listening. We keep our daily episodes...
© LitHub
Back to top