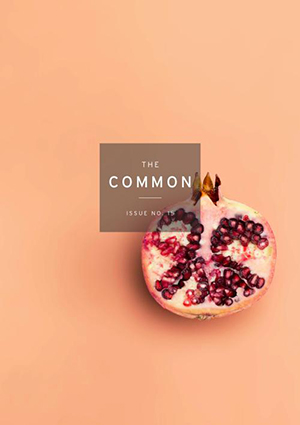 In spring 2018, acclaimed Jordanian writer Hisham Bustani joined The Common’s masthead as Arabic Fiction Editor and helped to realize the most recent issue’s unprecedented Jordanian portfolio. This portfolio celebrates some of the country’s best authors, showcasing a cross-section of varied styles, themes, and generations. It presents work by prominent writers such as Ghalib Halasa, Mahmoud al-Rimawi, and Elias Farkouh, along with established but lesser-known writers like Jamila Amaireh and Mufleh al-Odwan, and emerging writers like Majidah al-Outoum, featured here today, and Haifa’ Abul-Nadi. Many of these writers are appearing in English translation for the first time. The issue is available for pre-order here, and will launch this Thursday at Housing Works.

We awoke one morning to news of a death. The person we had lost was the one we used to call the Village Idiot—that buffoon who used to make us laugh and cry at the same time, that leaping, dancing ball of energy who would hurl himself around, wild with enthusiasm, stomping on our toes and crashing into us as he went gesticulating by.

He had a habit of outing clandestine lovers who were trying hard to keep their romances under cover. He would sing to us in a tender, plaintive falsetto. Sometimes he did seem to be singing a real song, one that actually existed out in the world, just swapping in here and there new words that he’d make up on the spot to cover the part of the lyric that had slipped his mind. But other times he seemed to be singing songs that were entirely of his own invention—tunes, lyrics, and all. Our Village Idiot was an artist, an innovator, and he danced like no one else: you’d see his whole body pulsing with the music. His moves were a blend of Eastern and Western and Latin styles, his own personal samba that he alone could pull off. Who of us could deny that a party without our Idiot in attendance would be a meaningless and flavorless affair? We needed the sparkle and flash of his presence, the glow of his crazy dancing, to light up the room for us.

We loved him. We couldn’t imagine our nights without him. When he didn’t turn up of his own accord, we would seek him out and check up on him, see how he was doing, just like our fathers and mothers always told us to.

The Idiot wasn’t poor, as far as we knew; or in any case he certainly never asked us for anything. But none of us ever hesitated—not once—to send food round to him, or to get him summer or winter clothes as the seasons changed. And one of the rich villagers had a big house with a spare room at the edge of the garden, so the Idiot was able to live there, for free.

None of us could talk openly about the Idiot’s family origins, though. Perhaps this was because none of us knew anything about his lineage; but perhaps it was also due to the fact that we were scared, every single one of us, of finding out he was related to us. What if our collective origins were in his?

“Ultimately, our Idiot was an intellectual, and maybe he even had a university degree.”

I once asked my mother about who this person living among us actually was, but she made it clear that I was not to ask that question ever again.

“Don’t talk about him that way—it sounds like you’re disrespecting him!”

I assured her that I was not, not at all, I just wanted to know, that was all there was to it. But she came straight back at me: “You’re not going to know. Just think of him as your brother, and treat him that way.”

After that I tried my best not to think about it anymore. But then one evening, as the Idiot was crashing around, making his usual din and capturing the attention of everyone present, a friend sitting beside me suddenly leaned in and asked, “So which one of us is the Idiot’s real brother, then?”

The question horrified me. Trying to make me feel less shocked, my friend let out a roar of laughter. But then he continued: “He could be my brother, or yours. Believe me, he could be the brother of absolutely any one of us!”

Yes, I was tempted to believe him. But our mothers and fathers hadn’t told us anything about the Idiot: not his name, his age, or any concrete facts about him at all.

My mother had once said to me, “Hey, don’t you go thinking he’s crazy! He’s saner than any of us, but he chooses to behave this way—and that could be the definition of intelligence.” And, yes, I believed her. Because no matter how crazy and foolish he usually seemed, he could also snap into rational conversation out of the blue, like someone fully in their right mind, and suddenly engage with an idea the others had been discussing or raise a topic that had just occurred to him. At these moments, you would hear vast tracts of poetry recited perfectly from memory, and always in support of his point, before he resumed his frantic leaping around.

Ultimately, our Idiot was an intellectual, and maybe he even had a university degree. Who knows what was inside that room of his? He would leave it the moment he woke up, locking the door behind him and only opening it up again when he was about to fall asleep. None of us had ever been in there, and no one knew what was in it. A room that no one but the Idiot himself ever entered, not even the wealthy householder who hosted him. If we wanted to see him, or he us, he would come to our places. We wouldn’t go to his.

I don’t know—maybe the rich man who owned the house was his father? He was a philanthropist, or at least that was how people saw him: they loved him for it. He spent most of his time on the move, traveling around and—rumor had it—taking care of his businesses. As for his wife and children, we would see them around, at school or in the market, but only from a distance. They were different from us, with their luxury clothes and their flashy cars and all their other things it would be pointless listing here.

The Idiot was more like us than his host family were, and closer to us, too. When he turned up to see us with his hair in a mess, we’d style it for him, and we’d straighten out his clothes, or get him to change them—we made sure he always looked good. We could give his laundry to any of the women in the village and be sure she would wash it and return it to him.

Why did I always feel like the village women—each and every one of them—really loved him? Was it just pity they felt? Perhaps. Would it be going too far to say that it could have been infatuation? I don’t know. The Idiot, when his hair hung down over his forehead, was physically attractive. And those black eyes of his? They certainly brimmed with stories. His was a sweet and pure soul, adept at floating gently through space or soaring to great heights, and we loved him, we really did, all of us, especially our wives and our daughters and our sisters. We had no problem with their love for him. But… what if they were having actual relationships with him? What if they were having sex with him? We didn’t want to think about it that way; and we are not about to start thinking that way now, either.

Or, to be precise, we don’t have the right to do so, because the Idiot is dead. He died, leaving behind a locked room containing who knows what. Not even the rich man and his family know what’s in there. They aren’t around anymore, in any case. Rumors have been going around the village about the whole family traveling to some other country because of the rich man’s businesses, or because of the children’s university courses. Plenty of rumors, but the only thing certain is that the wealthy man is gone and the Idiot is dead.

The Idiot bequeathed us a lot of poetry: we’d learned it from him, and we had it now by heart, so we have taken to reciting it like he used to as we walk the streets. We don’t pay attention to the love stories between the boys and girls of the village anymore, as no one has time to follow them like the Idiot used to do. Or could it be that he himself had in fact been the sole hero of these stories? I don’t know. But the Idiot died, and initially that same old question went round and round my head—and everyone else’s, too: “Which of us is his brother?” Was I meant to cry for him with the same grief as I would have if he really had been a blood brother? I wept in misery, like everyone else did, while a new question formed in my mind that was far more pressing than the old one: “Which one of us is the Village Idiot now?”

And I think I did what many others did, when I looked in the mirror and saw him there—what else could I possibly have done? I messed up my hair, let out a wild roar of laughter, and got to leaping around.

How Motherhood Gave Me My Voice 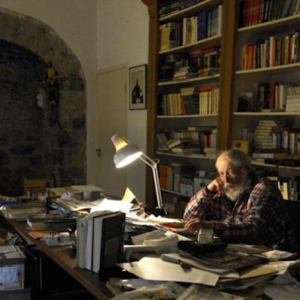 Lit Hub Daily: April 23, 2018 On Jane Austen, Northanger Abbey, and the timeless tradition of mansplaining. | Lit Hub “There are things more...
© LitHub
Back to top