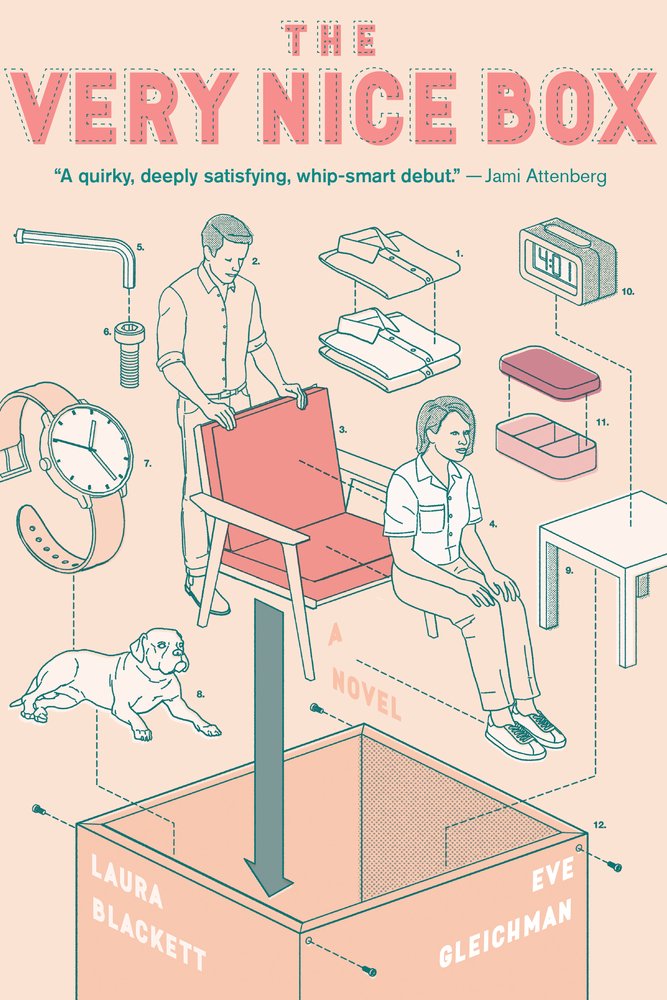 The following is excerpted from Eve Gleichman and Laura Blackett's debut novel, The Very Nice Box, about a product engineer who works for a hip furniture company, where sweeping corporate change lands her under the purview of a startlingly charismatic boss. Blackett is a woodworker and writer based in Brooklyn, and Gleichman's short stories have appeared in The Kenyon Review, The Harvard Review, BOMB Daily, and elsewhere. Eve lives in Brooklyn.

Ava Simon is a diligent, buttoned-up product engineer at STÄDA, a fashionable Scandinavian-inspired furniture company. Her well-loved, mild-mannered boss (and founder of the company) has been replaced by Mat Putnam, a handsome, young, charismatic bro who favors start-up culture and corporate team-building activities. Ava resents Mat and his corporate overhaul of STÄDA. This week, her Passion Project, a piece of furniture called the Very Nice Box, is at the center of one of his dreaded marketing initiatives: the weekly “Yes, And” meeting.

In a matter of weeks Mat had transformed the landscape of Floor 12; he’d ordered the installation of a basketball hoop in the middle of the floor, which Marketing used to pitch ideas via an intricate dunking game. He’d outfitted the west corner of the floor with pool tables and a shuffleboard court. He’d added grass-fed jerky and electrolyte-heavy drinks to the Salty Kitchen. He’d brought a “neg alarm” near the Imagination Room, which anyone could trigger upon hearing the words no, but, and can’t. And his latest initiative was a series of weekly “Yes, And” meetings, wherein Marketing associates gathered in a circle around an engineer to build a campaign for the engineer’s design. “It’s a tool I learned at Wharton,” he’d written in a circulated memo about the meetings.

Can one learn a tool? Ava thought upon receiving the memo. The meeting would amount to Ava’s personal hell, and this week it was her turn, to present the Very Nice Box.

I can’t believe I have to do this, she wrote to her SHRNK.

I can understand why this activity could be stressful. Who could you be if you allowed yourself to be pleasantly surprised? her SHRNK had responded.

She refused to discuss the meeting with Mat on the drive to work, lest he try to pitch it to her as an important team-building experience, or talk up Marketing, or preach the virtues of positivity, or explain to Ava why Engineering and Marketing belonged in the same room. They didn’t. Plus there was the rule about not talking about work outside of work.

But even if she could avoid talking about the meeting, she could not avoid the meeting itself, so at 3 p.m. she made her way to the Encouraging Desk Chair situated in the center of the Imagination Room, which was surrounded by a circle of a dozen empty, identical chairs. Soon those seats were filled by Marketing staffers. Most she didn’t know, but some she recognized; there was Sofia, for one, sitting with one leg crossed tightly over the other, and Vince, the junior Marketing guy from the Fry Shack line. The room was tight with anticipation, and Ava suspected she was alone in her dread.

Finally Mat arrived, closing the door quietly behind him. His hair was attractively disheveled, and he had tucked his white T-shirt into his jeans. The room went quiet, and although Ava was seated at the center of the circle, everyone’s attention was on Mat.

She felt dizzy with stress. Mat took a seat, winked at her, and leaned in. “It’s going to be fine,” he whispered. She saw Sofia look up and witness the moment with a raised eyebrow.

“Folks,” Mat said, clapping his hands together once. He paused to look everyone in the eye. “Welcome to STÄDA’s sixth-ever ‘Yes, And’ meeting. Today we will be learning about the latest Passion Project from STÄDA’s senior engineer Ava Simon.”

There was a weak smatter of applause.

“Ava,” Mat said, clasping his hands behind his head and crossing his boots at the ankle. “What can you tell us about the Very Nice Box?”

“Well,” Ava said. Her voice echoed against the wall of faces, each focused on her. She momentarily forgot what her job was, what product she was discussing, and why she was sitting there. Her mouth felt wired shut. She couldn’t think of any words at all, let alone a series of logical words that would join together to describe the Very Nice Box.

What had her SHRNK told her to do to calm down? Who could you be if you transported yourself to an ideal environment? her SHRNK had said. Where would that be? The answer to that question at one point had been Home, listening to my parents play music. Then it became Home, with Andie and Brutus. But lately, if she was honest, the answer was Mat’s car, on the way to work, which she had admitted to her SHRNK earlier that morning. She tried to visualize herself in Mat’s car. The taste of slightly cooled milky coffee, the warm cup in her hands, the pleasant deepness of his voice. She took a breath. She had to pull herself out of the well of despair. Imagine a rope, her SHRNK might say. Who could you be if you climbed the rope?

She climbed the rope. She visualized the Very Nice Box. It was beautiful, with perfect dimensions and an ingenious lid. She took a breath. “I’m finalizing the design for the Very Nice Box, which is a box that can be used in a multitude of ways with other pieces in the Very Nice collection, which we hope to launch next year. We’re spending a lot of time on the most basic component to make sure the line is orthogonal and easy to understand while still being elegant and up to ST DA’s craftsmanship standards.”

“But what’s it for?” someone from Marketing said loudly. Ava looked up. It was Owen Lloyd, the same Marketing associate who had blathered his praise for Mat the day of Karl’s retirement announcement. He wore a neon-yellow polo with the collar popped on one side. Ava glanced at his Decent Notebook, which had his name inscribed. At the top of the page he had written Box?

“You mean box, like . . . box?” Owen said, unsuccessfully suppressing a smile. He glanced at Mat.

“For objects,” Ava said, containing her impatience. “People put things inside boxes. The Very Nice Box is simply an extra-large box for large things, or even perhaps a large quantity of smaller things.”

“Maybe if we back up for a moment.” It was Sofia speaking up now, to Ava’s annoyance. She had her own pad of paper out, and a bright red pen, which she rapidly clicked several times. “What makes the Very Nice Box different from, say, the Memorable Archives Box?”

“Everything,” Ava said. “Everything is different about it. The Memorable Archives Box is for photographs, artwork, and letters. It doesn’t have hinges; the lid slides along a track. And it’s much narrower.”

“So could you say this is a more refined version of the Purposeful Loose Ends Box?” Sofia said, jotting down something that Ava couldn’t make out. Had she researched every box Ava had ever designed in order to try to bring her down at this meeting?

“Not exactly,” Ava said, her face heating up. “The Purposeful Loose Ends Box is one-quarter the size of the Very Nice Box and designed to sit on a shelf exclusively.”

“So this is like a more versatile Sociable Coffee Table,” Sofia said.

Sofia closed her eyes for a long moment. “I want to make sure Marketing totally understands how to promote your design. Its purpose appears to be clear to you, but it’s not yet clear to me.”

The sound of an airhorn pierced the air, startling everybody. “I’m sorry for the neg alarm, but I’m going to pause us right there,” Mat said. “Remember that this is a ‘Yes, And’ meeting, not an ‘Okay, But’ meeting. Let’s activate one thousand percent positivity. I, for one, love the idea of the Very Nice Box. There are tons of useless weird things that I have lying around my apartment. And don’t even get me started on my car.”

“You know, I actually like that!” a Marketing associate said. She was small, with a swoop of bangs that obscured one eye. “It’s like, everyone has junk, and everyone loves boxes.” Why was it that as soon as Mat backed something, it became not only acceptable but popular?

“Yes!” Mat said. “And I think this fills a major, major marketing hole for us. We can one thousand percent market this as the box for minimalists.”

“Yes!” a Marketing intern chimed in. It was one of the guys who’d left the table in the cafeteria as soon as Mat had arrived. His face was covered in acne scars. “And that’s actually perfect, because minimalists make up such a big portion of our clientele.”

“Yes,” Owen Lloyd boomed. “And so the Very Nice Box is like . . . a cool minimalist solution for minimalists who fell off the wagon and started buying more stuff even though they tried not to.”

It went on like this for what felt like six units. Ava had no time to interject, correct, or even agree. She listened as the Marketing team built a campaign around her design. It was strange and oddly exhilarating. They ended the meeting by shouting the word GO! 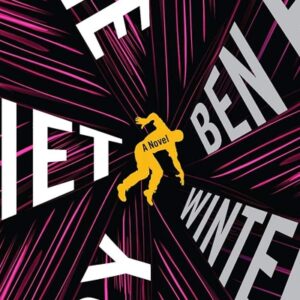 The Quiet Boy by Ben H. Winters, Read by William DeMeritt Every Monday through Friday, AudioFile’s editors recommend the best in audiobook listening. We keep our daily episodes...
© LitHub
Back to top