A POEM by John Ashbery

Yesterday, John Ashbery turned eighty-eight years old. As his new poem, The Upright Piano, happily demonstrates, Ashbery refuses to show any signs of growing up into a well-behaved, morose and boring poet. Instead, luckily, we’re treated to this romp of a poem that has all of the belovedly parodied, self-parodied, analyzed and notorious Ashberyian effects. Yet a career so illustrious can also be distraction before the thing itself. True, Ashbery is our great sage of distraction, but allow my naive fantasy for a minute in which a window is opened and all the glorious fog of Ashbery theory and criticism, veritable cottage industries of scholarship and reviews, accolades and derision alike, rolling eyes or swooning sighs are rolled up and sent exiting the room forthwith. What’s left is the poem itself, full of erotic swagger and gorgeous melancholic invention. These local miracles of language, such as “Somebody left their toothbrush on the dance floor.” It’s an image that feels like the embryo of whatever poetry might be, today, a few thousand years from now. The incipient music in such wit and wonder is certainly enough for me. –AF

Did we once go to bed together?
And how was it? I need your help on this one.
Good thing it happened, too—
Intelligence without understanding
is like constant frost, pounding at the temples
until its bargain is overseen. I kid you not.
We “bought into” the ephebe-consciousness scam
that razed our era, and the next one.
What was it about those boys? Some were plain,
others smooth. All enjoyed the sun
for as long as it chose to shine upon them.
But there were texts to be looked to, dark as forests
when the sun shines in central summer.
Nobody did the escaping this time.
Work with your hands a little bit.
You might want to convert yourself
on a scholarship. I’m hoping to live with him.
I can’t tell if it’s possible. The blood-presence drives
to sleep longer on the couch, as the fair one pines.
Oh averages! It was your story that brought us down,
at the first posts, under green leaves.
Your logic I forswore, even as its wave reached out toward me.
Hard lines. Besides, it’s poor form. (Pure form?).
Somebody left their toothbrush on the dance floor.
My understanding, cool from the diagnosis,
is they don’t want it to be there.
You mean you’re suffering like everybody?
That, and a few more kicks to the groin, means we’re finished here.
O idle light! How polished you were at first!
If things darkened afterward, that was no one’s fault
except the self-appointed guardians of our civility’s,
who nattered on, dense with the realizing it.
We knew it before. So many flowers washed up in the beach
it was pure chaos, or fun. Now it’s time to pray.

John Ashbery’s most recent book of poems is Breezeway (2015, Ecco/HarperCollins). A two volume set of his collected translations from the French (prose and poetry) was published last year (FSG). Also active in other areas of the arts, including theater and film, he has served as executive editor of Art News, and as art critic for New York magazine and Newsweek, and exhibits his collages at the Tibor de Nagy Gallery (New York). He has received many honors and awards, including a Pulitzer Prize, two Guggenheim Fellowships, a MacArthur, and recently the Medal for Distinguished Contribution to American Letters from the National Book Foundation (2011) and a National Humanities Medal, presented by President Obama at the White House (2012). 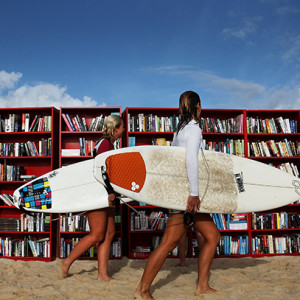 Laura Dave and the Deeper Beach Read If you are lucky enough to grow up a short ride away from the ocean, childhood summers mean trips to the beach. Though my family...
© LitHub
Back to top