The Unlikely Winner of the World’s Toughest Horse Race

Alyson Hagy on Rough Magic, Unruly Women, and the Beauty of Horses

The first time a horse ran away with me, I suffered pure glory. I was transported by the sheer speed of the experience. The maniacal balance. The blind righteousness of animal acceleration. A group of us had organized a ride in the steep hills of the Shenandoah Valley. It was autumn. There was chill and mud and that cheerful brand of equestrian bluster most often fueled by Bloody Marys. The horse, a retired thoroughbred who’d spent his career on tracks near Chicago, was new to me. My father had bought him after I outgrew my stubborn and gifted pony. I was a gangly sixteen. I’d been riding since I was seven. I thought I understood the souls of horses.

The plan was for a genteel canter uphill. But Caine, as I called him, hadn’t been tutored in the genteel. When the cross-bred mongrels in front of him shifted into a polite lope, he was transformed. He gathered his long, black legs and launched like a rocket. That’s what it felt like. Truly hypersonic. I don’t remember hearing a single sound. I do remember feeling the earth tilt and watching the trail before us blur into a ribbon of browns and golds and greens. Caine passed every horse in the pack in the span of a few seconds, and he did it with ease. He was a big boy, nearly seventeen hands tall, and gentle. He got along well with the other horses in our motley barn, one of whom was a state champion pleasure horse. For Caine, however, that morning had nothing to do with pleasure. That morning was about competition, and need. An athlete born and bred, he did what he had to do. It was up to me to grab at his mane and hold on.

The second time a horse ran away from me, the outcome was less satisfying. Caine and I had entered the junior division of a nearby horse show. I was looking forward to powering over a course of low jumps with him. He was very good at that. But the flat class, where the entries had to walk, trot, and canter around a small ring in front of a judge, came first. When the announcer called for a canter, Caine let loose once again. He accelerated so quickly we failed to make the turn in the arena. I came to a few seconds later, flat on my belly, my mouth full of sand. My handsome gelding was fine. So was I, once I was able to catch my breath. But I found myself forged by fear instead of glory. I felt more distance from my gelding than I ever had before. I couldn’t control him. He seemed to have forgotten me. After a few weeks, I decided Caine was truly too much for me. I turned my attention to more manageable pursuits.

When she was nineteen, Lara Prior-Palmer found herself looking for something, anything, that would be too much for her. Unhappy with a body “rusty and yearning for usage,” Prior-Palmer was lolling her way through a dull gig as an au pair in Austria when she made the impetuous decision to enter the Mongol Derby, a 1,000 kilometer race across the steppes of central Asia. Prior-Palmer could barely find Mongolia on a map. A weekend rider, she had never even completed a day-long endurance race, much less trained for ten dehydrating days in the saddle. She didn’t own the proper gear. She hadn’t spent months raising money from sponsors. She didn’t get the list of recommended vaccinations, not even the one for rabies. She

did know one end of a pony from the other. She also had years of practice at not taking herself very seriously. That, it turns out, might be the most necessary trait of all when it comes to competing in the longest horse race in the world.

What is it about women and competition that fascinates us so, especially in books and films? Is it the underdog factor, our desire to see those who are almost always smaller and physically weaker prevail? Is it our proper impatience with patriarchy and the meekness it tries so fitfully to impose on half the population? Moreover, what is it about women and competition and horses that creates such dramatic capital? Is it the fact that, on horseback, women can equal—and exceed—the achievements of men? I once watched a tiny American grandmother outride a flotilla of Arab royalty in an endurance race near Dubai. It was a sight to behold. That woman, a two-time world champion, was the honored guest of a crown prince precisely

because she was the best, and he very much wanted to learn how to defeat her. The prince, a student of his culture’s long and storied equine history, understood that when it comes to monumental stretches in the saddle, it’s the partnership, not the muscle, that matters.

It’s not healing that Prior-Palmer seeks, or even liberation. It’s the “world in the raw,” something many of us have learned to crave.

Lara Prior-Palmer surprises herself many times in her stirring new memoir, Rough Magic, a chronicle of her adventure in the 2013 Mongol Derby. Prior-Palmer seems barely old enough to be cocooned in ennui, but cocooned she is, filled with dread about “dead-end jobs” and trying her best to avoid the probable grind of studying at a university. She signs up for the Derby on a dare—a dare with herself. The fear engendered by this impulse proves clarifying for Prior-Palmer, at least temporarily. She is, by any rational standard, completely unprepared to survive even one day of the famously grueling race. Yet she somehow, Winnie-the-Pooh notebook in hand, transforms her lack of preparation into a source of disarming humor and rude strength. She bumbles her way through pre-race meetings and practice sessions on the nearly feral native ponies, stubby-legged descendants of the animals that carried Ghengis Khan and his hordes to the gates of Europe. She is mocked. And ignored. Everyone involved predicts she will finish last, if she finishes at all.

It turns out that sometimes preparation isn’t everything. Prior-Palmer possesses some valuable instincts. She quickly learns to ask the Mongol herders to give her their best animals, the ones that are—like her—both strong and unruly. She gives these ponies their heads, allowing them leeway to help her select a route, leaving the GPS she can barely read stashed in her backpack. Instead of raw speed and an obsession with maps, she opts for a natural steadiness, a way of traveling across the land that rewards improvisation and stamina. When she arrives at an urtuu, or official way station, to swap ponies, her animals aren’t exhausted, so she almost never earns any penalties. She learns to ride mostly alone, a situation that suits her quixotic personality. She mitigates the long hours and physical discomfort by soaking in the vastness of the landscape, and daydreaming. She reminds herself the whole thing is a stinking lark. At the end of the first day, she wanders into the final urtuu walking beside her pony only to find she’s next to last. Four days later, she’s almost in the lead without really trying.

Prior-Palmer’s main competitor in the final stages of the race is, of course, another young woman. Before 2013, a woman had never won the Mongol Derby. Devan Horn, a flashy Texan, has every intention of doing just that, and she begins putting the other competitors in their place before the race even begins. Prior-Palmer is beneath Horn’s notice. But as the two begin to vie for first place, a piercing rivalry takes shape. Brit versus American. Slacker versus overachiever. The book becomes a romp in more ways than one.

Not so strangely, Prior-Palmer focuses on sustaining herself mentally as well as physically. She suddenly wants to win, very much so. But she knows how draining competitive greed can be. If she’s given a fast pony, she goes fast. If her shaggy partner is less interested in speed, or even downright slow, she finds a way to make it work. Her goofy intuition reminded me of my own brother, a class-clown type who almost always seemed too antic, too unserious, for the elegant rituals of the horse world. Yet I could ride and ride and ride, and practice and practice and practice, and he always got more out of a horse or pony than I did. He didn’t even care. He just had the gift. As soon as he was aboard, he created a new center, a path of pure communication, with the other animal. He was very quiet when he rode, an unusual state for him. And the results were beautiful.

Many, many readers are going to be charmed by Rough Magic, whether they can tack up a horse or not, and rightly so. The setting is exotic. The challenge is extreme. The protagonist is winsome and imperfect. But I suspect most of them will experience the book as more than a reboot of Cheryl Strayed’s Wild adorned with bridles and saddles. For one, Prior-Palmer is young. She’s not starting over as a woman or a writer. She hasn’t suffered a trauma. She isn’t recovering from an addiction. She’s merely beginning to find out who she might become. The Mongol Derby makes her “feel like a turnip that’s just been yanked from the earth.” The solitary nature of the race and the virtual silence of the steppe reset the familiar boundaries of her self. The magnitude of what she ultimately achieves “stun[s] her into writing,” but it’s not healing that Prior-Palmer seeks, or even liberation. It’s the “world in the raw,” something many of us have learned to crave. She fuels herself with wonder at the vastness of wind and weather, elements that don’t give a fig for humans and their preposterous competitions. The race “reclaims me as an animal,” she writes, “my favorite way to be.” This assertion may be at the root of the book’s power and our ongoing attraction to narratives that feature horses. We want to be reminded that we, too, are animals.

Caine, my spirited thoroughbred, eventually found a good home at a nearby school as part of its equestrian program. I went far away to college and constructed a high and happy fortress of books for myself. My mind was so hungry. Yet it didn’t take long for my farm girl body to rebel in its own particular ways. A wise physician urged me to treat what we now call anxiety with exercise. A friend, who had similar storm clouds roiling within her head, asked me to take a riding class with her. I did. And the cure was almost instantaneous. I didn’t even need to tighten the girth on a sweaty saddle to be transmuted. It was so good to be with horses again. It felt so essential. The smell of grain and wood shavings, the expectant nickering of a lively mare, the proximity to another thudding heart—they began to erase the edges of my neurotic armor. Unlike Prior-Palmer, I would never be a great rider, but I was once again a grateful one, ready to be carried away on just the right swift current with just the right unhindered partner.

Alyson Hagy was raised on a farm in the Blue Ridge Mountains of Virginia. She is the author of eight works of fiction, most recently Scribe. She lives in Laramie, Wyoming.

Lacy Johnson and Anjali Enjeti on the State of
Reproductive Rights

When Mystics and Mediums Convinced Scientists the Paranormal Was Normal 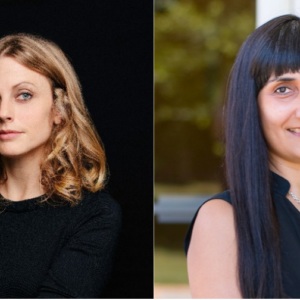 Lacy Johnson and Anjali Enjeti on the State of
Reproductive Rights In this episode of the Fiction/Non/Fiction podcast, Anjali Enjeti and Lacy Johnson speak with hosts V.V. Ganeshananthan and Whitney...
© LitHub
Back to top