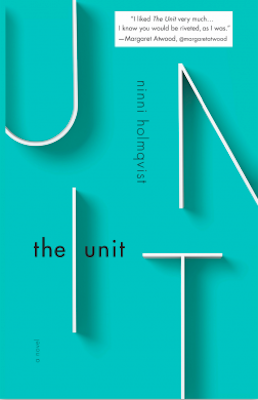 The following is from Ninni Holmqvist’s novel, The Unit. The Unit envisions a society in the near future, where women over fifty and men over sixty who are unmarried & childless are sent to a community called the Unit. It’s an idyllic place, but there’s a catch: the residents must donate their organs, one by one, until the final donation. Ninni Holmqvist made her debut in 1995 with the short story collection Suit [Kostym] and has published two further collections of short stories since then.

Yes, I did actually have a house. When I say that I was picked up outside my house, I don’t just mean my home, my residence, but my actual house. Despite my very low and irregular income, I had managed to get a bank loan some eight years earlier, just before I turned forty-two, to buy a little place I’d been to look at several times, and one of my life’s dreams had been fulﬁlled: a house of my own and a garden of my own on the open, rolling plain between the Romele Ridge and the south coast.

But I hadn’t been able to aﬀord to maintain the house. The bargeboards and the window frames were rotten, the paint was ﬂaking, the roof leaked in at least two places, and new drainage was needed all the way around the house. My income just about covered the interest on the loan, paying it oﬀ in the smallest possible installments; wood and electricity and maintenance costs, plus insurance, taxes, gas, and food for myself and my dog. And I don’t think it could have made much diﬀerence to the state coﬀers when the conﬁscation authority sold the house at auction—that is if they managed to sell it at all in its present condition.

But despite the fact that I’d let the house get so run down, and despite the fact that it was old-fashioned and impractical, and cold and drafty in the winter and damp and stuﬀy in the summer, at least it was my very own home, my sanctuary, a place over which I and no one else had control, where my dog could run free and I could work in peace most of the time: no noisy neighbors on the other side of the wall, no footsteps clattering up and down an echoing stairwell, no squabbling kids in the shared courtyard, no communal outdoor spaces where families with children or friends could come along and sit down just as I was relaxing in the sun, noisily snacking or partying around me as if I didn’t exist. I felt at home here, both indoors and outdoors; this was my domain, and if anyone—a neighbor or a friend who happened to be passing by—noticed that I was sitting in the garden, and stepped in through the gate for a chat or a cup of coﬀee, then at least it was me they wanted to talk to or drink coffee with. And if I didn’t have the time or the inclination for a chat, then I had the right to tell them that, and they would have to go away.

It very rarely happened that I would ask someone to go. I didn’t have very many friends, and not so many neighbors either, and if visitors turned up unannounced at an inconvenient moment, I usually let them stay for a little while anyway. If you live alone in the country you can’t aﬀord to push away your neighbors, or fall out with them. In fact, the way I see it, you can’t aﬀord to fall out with anyone at all if you live alone and no one needs you. Therefore I was friendly and welcoming from the very start each time someone turned up in my garden or at my door, even those times when I was absorbed in my work and they really were disturbing me.

At that time, when I’d just moved in, I still regarded the future with optimism. I still believed and hoped that it wasn’t too late to have a child. Or at least to start earning money from my profession and become ﬁnancially secure, or ﬁnd a partner, someone who would love me and want to live with me. Almost to the very end I had hopes, futile and desperate hopes, of Nils.

Nils was several years younger than me, tall and strong and with tremendous sexual vitality. We had the same secret desire. The same sexual fantasies. The same hopelessly politically incorrect attitude. We were like a hand in a glove. He was actually living with another woman already; they had a child together, a boy. He never said he loved me, but for him, as for me, the word “love” was a big thing to say. But he said he “almost loved me”— he said it many times—and for me that was wonderful to hear. To be almost loved is as close as you can get to being loved without actually being loved.

Perhaps it was because of this “almost loving” that as late as six weeks before my ﬁftieth birthday, in a ﬁnal attempt at least to gain a dispensation with regard to the date, I turned to him and asked him to save me—yes, in my desperation I actually used that expression—by separating from his partner and becoming mine instead, and, regardless of whether it was true or not, supplying a written declaration to the authorities stating that he loved me. When I asked him this outright he became terribly upset. In fact, he cried. He sat there naked on the edge of my bed, and that was the ﬁrst and last time I saw him cry. He sat there with his eyes glistening, sobbing, and he pulled a corner of the duvet over his penis, apparently unconsciously, and said:

“Dorrit, I think more of you than I’ve ever thought of any other woman, and it isn’t just sexual feelings, you know that. I admire you and respect you, I almost love you, and I would be more than happy to live with you and share my life with you. But for one thing, I want my son to grow up with both parents living in the same house. And for another, I can’t actually say I love you, because I can’t lie. I . . . I’m just not made that way. I can’t say it to you, and I can’t say it to the authorities; I can’t put my name to something that isn’t true. That would be perjury. I would be committing a crime. You have to understand this, Dorrit. I . . .”

He paused, took a deep breath, swallowed a few times, sniveled, rubbed his ﬁnger under his nose, and went on, virtually breathless, almost whispering:

And he wept and wept. He put his arms around me, clung to me, howling like a child. I didn’t cry. Not then.

I didn’t cry until I said good-bye to Jock, my dog; we’d been so close for so many years. He’s a Danish-Swedish farm dog, white with black and brown patches, brown eyes, and ears that are as soft as velvet, one black and one white. I gave him to a family I knew and trusted, not far from where I lived. Lisa and Sten and their three children. They’ve got a smallholding with horses and chickens, and they were very fond of Jock. The children loved him. I knew he liked them too, and that he’d have a good life there. But even so. He was mine, after all. And I was his. Between him and me you really could—without committing perjury—talk about love. The feeling was mutual, I’m convinced of that. But dogs don’t count; a dog’s dependence and devotion are not enough. And it was when I had left Jock at Sten and Lisa’s and I was driving away that I wept.

Loving and leaving don’t go together. They are two irreconcilable concepts, and when they are forced together by outside circumstances they require an explanation. But I was unable to give Jock that explanation. Because how do you explain something like that—or anything at all—to a dog? Nils could at least explain to me why he couldn’t be with me properly and make me a needed person, and I could understand that. But how will Jock, if he’s still alive, ever be able to understand why I drove away without him that day? How will he ever be able to understand why I never came back?

From The Unit.  Used with permission of Other Press. Copyright © 2017 by Ninni Holmqvist . 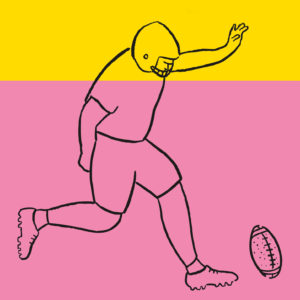