Our surreal triangle shuffled on a suburban Virginia street across the river from the white icing US Capitol dome that September night, 1990:

Gordon Liddy, who boasted about learning self-control from listening to Hitler, was a Watergate caught-and-convicted covert operative, an ex-FBI agent who Nixon said “wasn’t screwed on tight.”

They let me run with them.

I never found out how or who brought Mailer to the shadow stalkers. He was researching his novel Harlot’s Ghost that was going to be the start of the two “ultimate” fictions about the CIA. Someone in that loose group of fellow fanatics called me that morning to tell me about Mailer being in town “working with us” and they were going to have a dinner for him that night, but…

But none of them were fiction readers.

They were just the facts that are or could be kind of guys.

And they were all guys. White guys. Usually lacking in social skills.

“So, um, Jim, well, we figured it would be a good idea for Mailer to have a novelist to talk to at dinner, you know, just in case, so would you come?”

I’d get another chance for time with this Major Author who would Tell Me Words of Wisdom and maybe even befriend this colleague—right?

I drove to Alexandria, a gem of a Virginia suburb usually easy to find just across the Potomac river from the city of Washington where I’d lived for almost two decades. Found the block of flat-faced townhouses a block or so off a main drag. Parked. Remembered exactly where I parked. That I remembered.

The narrow townhouse seemed packed with guys kind of like me…

…and there, sitting in a corner by the open kitchen, Norman Mailer.

He wore some kind of springtime sweater and pants. White tuffs of hair.

Nobody thought to introduce him to this drafted black jeans newcomer.

So I edged through the guys setting up rickety card tables to cover with white paper plates and plastic silverware for the aluminum tubs of food, introduced myself by my name that would mean nothing to him and the Redford-Condor card that might mean something to him. He grunted, raised a brow at this alleged novelist who’d butted in on a conversation.

Someone had told Mailer that G. Gordon Liddy was coming.

Part of me wonders if Liddy was ever actually formally invited but never mind.

Sat at the kitchen table while at least a third of us paid rapt attention as he dialed—yes, dialed—Liddy’s house.

“Gordon Liddy—this is Norman Mailer. I came all the way down to Washington to meet you, and now they say you’re not going to come here for dinner… Well right now. We’re all waiting here for you.”

A beat, then Mailer smiled and handed the phone to someone who could tell Liddy where we were.

Liddy was at least a half-hour sane ride from this townhouse.

Norman started talking to other guys.

I’d already been pushy, so I held back. I mean, I’d get another chance for time with this Major Author who would Tell Me Words of Wisdom and maybe even befriend this colleague—right?

I remember helping shuffle things around the dinner tables.

The dinner that night for Mailer was carryout. Maybe barbecue, I don’t remember. Maybe canned corn.

I’m a fast eater. Maybe 20 minutes after the phone clicked, I finished my plate. Dumped it in a black plastic trash bag.

A knock on the front door.

A second knock, and this time, someone beat me to opening the door.

Then he strode in.

Mailer casually stood and moved closer to the front room where Liddy stood—but acted like he was waiting for Liddy.

Now I realize I was watching a stand-off of macho.

Then I thought our hosts were just being awkward and not introducing the two legends.

So, well, I went ahead and did it myself: “Gordon Liddy, this is Norman Mailer.”

The two men drifted off together toward the kitchen, talked for…

For at least five, ten minutes.

Then Gordon came back to the living room. Filled a plate. Looked for a place to be not with Mailer… and I motioned him into sitting down with Condor.

While he ate, we talked. Which meant I would ask a question and he would tell me THE unequivocal answer. He’d jab his forefinger. The key thing I got from him was his insistence that the Nixon White House indeed ordered him to do his duty as an American and kill investigative reporter Jack Anderson who later became my boss and made me a muckraker.

I’d previously met one of the Plumbers’ killer crew, Frank Sturgis, ex-CIA associate and friend of Jack Anderson’s. Sturgis claimed his CIA codename was Condor. Frankie was a friend of Jack’s before the hit contract came down. I’ve always wondered if the stupid murder methods the killers first came up with were Frankie’s way of buying time for the hit to get called off by someone not so unscrewed as Liddy—and that’s what happened later in a walk in a park.

The evening wore on.

One of the dinner organizers pulled me aside.

“Um, Jim, none of us are really going to go that way, and you are, so would you drive Mailer back to his hotel?”

Why yes. Yes I would.

…Liddy said he’d walk out with us.

The door on the townhouse closed behind us.

I followed them like a nervous cowboy trying to herd two intense bulls, gently nudging them to lead the way toward my parked car, there, it was parked right where I remembered it was.

The two much older men passed social niceties back and forth.

Then, middle of the street, Mailer stopped.

His gesture whirled Liddy to stop and face him.

Mailer the boxer stood just out of reach of Liddy the trained secret agent.

Jim the irrelevant shuffled to where I could watch both their faces. I was to Liddy’s right. Mailer’s left (positional politics in its purest form).

The Norman Mailer of Legend and Lore rose as tall as he could—he was about half a head shorter than Liddy. Mailer’s voice intoned the Gods. He announced that two enemies had just met, and that though they were still on opposite sides, their meeting had some kind of friendly cosmic importance.

“In the Movement,” said Mailer, “we don’t shake hands to acknowledge each other at such a powerful moment. We butt heads.”

And then—oh, then—Mailer lunges to grab Liddy’s blue blazered arms and tries to butt him in the forehead.

Liddy freaks out, leans back in shock and horror as Mailer keeps trying to butt foreheads.

For what felt like a thousand heartbeats, these two men danced in the empty street right in front of me.

Somehow a sufficiency of head butting appeared for Mailer. He released Liddy with a triumphant look of… well, triumph.

Wide-eyed Liddy ran away as fast as he could into that dark night.

Must have been a fascinating ride back to DC for me with Mailer, right?

We got to my car. He climbed in the passenger seat. We pulled into that American street.

And as I did, flustered from what I’d witnessed and who he was, I kept trying to ask Mailer questions about… well… anything. I’d get grunts for answers. So I did the obvious thing and talked more and faster and maybe louder, babbling even more questions and open-ended statements and realized that I was blocks from where we started and I was lost.

I was driving lost with Norman Mailer in my care and custody beside me.

Terror gripped me: What if I disappeared America’s legendary author somewhere in the suburbs of Virginia?

Fifteen, twenty minutes, I’m babbling faster and trying to not mention what is oh so fucking obvious…

And then Mailer points: “Isn’t that the Washington Monument?”

It was, and dodging through streets to keep it in my windshield, I found the entrance ramp onto the short run of highway back into DC. Got off at the right exit. Slowed as we neared the downtown across from a park location of the Army-Navy Club where Mailer was staying and where I’d once spent an afternoon with James Jesus Angleton, codenamed Mother, the spy legend who’d monotone about fly fishing, poetry, and why that agent got cobblestoned in East Berlin all while the ash on his cigarette grew to impossible lengths.

I slowed my car as Mailer and I neared the Army-Navy Club.

Mailer didn’t wait for me to brake. He threw open the still-rolling car’s door. Hopped out and slammed the door behind him as he hurried past the club’s doorman without a backward glance.

We didn’t stay in touch.

James Grady’s first novel Six Days Of The Condor became the Robert Redford movie Three Days Of The Condor and the 2018-2020 Max Irons TV series Condor. Born and raised in Montana, Grady has received Italy’s Raymond Chandler Medal, France’s Grand Prix Du Roman Noir and Japan’s Baka-Misu literature award, two Regardies Magazine short story awards, and been a Mystery Writers of America Edgar finalist.  He's published more than a dozen novels and three times that many short stories, been a muckraker journalist and a scriptwriter for film and television. In 2008, London’s Daily Telegraph named Grady as one of “50 crime writers to read before you die.”  In 2015, The Washington Post compared his prose to George Orwell and Bob Dylan.

C Pam Zhang on the Psychic Idea of Home 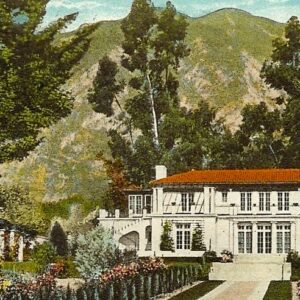 The Half-Truths of Harrison Post: Moneyed Magnate or Jazz Age Grifter? That summer, Porto Marina Way was still a new road. Construction crews had cut switchbacks into the coastal slope a few years...
© LitHub
Back to top