The Terrible, No Good, Very Bad Day I Woke Up As a Debut Author

Jade Sharma Tries to Be Happy About the Publication of Problems

Alarm. Every beep is louder. Why does this technology exist? Today: a lot of novels didn’t come out that should have, and some did come out, like mine. I sit up and I look at my room: clean jeans on the sofa, dirty t-shirt on the floor, half-open drawers, a flat bottle of soda without the cap. The room of a child. The longer you stay in bed the worse it will be. Sometimes I can slip into the day like Jason Bourne into a crowd. Other days I have to drag myself out of bed like a mother who has had it up to here. Today is one of those days.

Just five more minutes, then it will somehow be ok.

Dear God—oh fuck it, I know you don’t exist. I pull my laptop over and open it. I have 50 notifications. I read some but the gist is congratulatory. I should do that more, like, go out of my way to say something nice. Every nicety reminds me of my own selfishness.

My mom calls. I reject the call.

–You know, she says, you have a doctor’s appointment.

(should I say something? Will she even remember?)

–Mom, my book is coming out today.

–I thought it was already out.

–No, not until today.

–I thought it was on Amazon and you told me there were reviews.

–Yeah, but now people can buy it.

–They couldn’t buy it before?

–No, that happens today.

–Oh. But it was already on Amazon, right?

My face is buried in the pillow on my shrink’s couch. I hear a muffled “Congratulations” from my psychiatrist. I sit up. I look out the window. This fucking office. Everything is bright and colorful but super uncomfortable. The point is that it looks good in the picture, and then you get there, and then you’re there.

–Why don’t you look like someone whose book came out today? he asks.

–I didn’t have a novel come out today, he says.

For a moment neither of us say anything. Two idiots in a box in a bigger box.

–I feel anxiety because it’s been well received in this nice little comforting world, but now it’s going to the masses, like, those assholes on Amazon where they just write stuff like, “Total garbage.” And then I feel guilty because these aren’t real problems. You know how many people don’t get published and want to? Like that’s their dream? And I’m bitching about it? All I do is think about the second one. Every day I feel guilty that I’m not working harder. And I still borrow money. I don’t have kids. I have nothing. I just have this book and my boyfriend and one day he’s going to get sick of someone who can’t get out of bed or who won’t stop crying.

–I’m not naive enough to tell you this one book will fix all your problems. I’m talking about just taking this moment in, he says.

–Take this moment in? I know you’re a real doctor, and not a white girl who is super into yoga, but I have no idea what the fuck that means. Like, should I tell my barista? Should I have a coffee and sit on a bench and stare at a tree? I think I want a coffee.

–I’m talking about acknowledging you accomplished something other people haven’t.

–Does that make me better than them? Or more talented? Herman Melville died broke.

–No, just you, in your life. Take credit for something you did, and all the hard work that went into it. And how the next one will be better.

–I think those thoughts will be easier to process with a Klonopin prescription.

–Ok. But you have to take them as needed. Like, really as needed.

I get a text from my brother: Your novel is on Amazon! It’s like a real book!

At first I feel good. My brother has never mentioned my book. Then I re-consider. He’s not saying “Congrats.” He’s not saying “I’m so proud of you.” He actually can’t believe it. He never believed that I spent the last five years writing a book. What did he think I was doing? Watching daytime television? I am retroactively pissed. And of course it’s on Amazon. It’s not even that hard to get a book on Amazon. Why do people disappoint you in such predictable ways?

He texts again: Going to put it on FB

Back at home, I take off my clothes. I get in bed and watch Veep. Stare at Twitter. Check my email.

–How does it feel to be a debut author?

–Good. Exciting. This could open doors. If my next book is awesome, it could be big.

–I think it’ll sink in. It feels abstract right now.

My brother texts again: Why didn’t you tell me it’s dirty? I posted it on Facebook! Now all my co-workers are going to see it and feel obligated to buy it. Why wouldn’t you tell me?

Text back: There is a synopsis right next to the book. Just tell them not to buy it.

A minute passes: But then who will buy your book?

–Dude, I finished your book in one sitting. It’s so good. I’m really proud of you, she says.

–This must be a big day for you.

–What are you scared of? she asks.

–I’m scared that this is the part of the movie where the credits roll.

It’s true that I don’t feel as bad as last week. Not as useless. Jenefer Shute told me, Everyone’s first book is an act of desperation. But I still feel desperate. What do I need—money? Is it attention? Hey, everybody, look at what I can do. I’m super good at making up people and their stories. And then I write it alone in a room and then people go home and read it alone in a room. It’s so fucking weird. Is this a big deal? Is this not a big deal?

I go across the street to buy cigarettes. I switched to vaping but today I want a cigarette. This is me celebrating. I also buy a pint of Chunky Monkey. This is me, taking in the moment. Maybe in a parallel universe there’s another me who is having a glass of red wine, like, “No one knows, but my novel is out today,” feeling confident and satisfied. I consider telling the bodega guy, but that’s just because his English sucks and he probably won’t understand me. I need to take my meds. The fresh air is nice, but it’s so hot I can’t wait to get back to air conditioning. Two pills, another sip of Coke.

–I need you. I feel like I’m slipping into an abyss. I need you to hold me, I whisper from under the blanket.

I am a crazy person talking on the phone from under a blanket.

–You got great reviews. People who know what they are talking about said great things about it. There’s no abyss. You don’t need me to save you.

–I’m terrified of my mail.

–I’ll open the mail when I move in.

–I promise you will never see a piece of mail, OK?

I feel safest in my bed in my room. I spend too much time in bed. I like my bed and my TV. Forget about the next book. Forget about my family. I have a few friends and someone who loves me. I hate that a man makes me feel special, but he’s my person, and he knows about depression and he still wants to move in. I try to feel that love but it’s far away, like when you think about what’s outside of space.

I put the clean clothes back in the dresser and close the drawers. Everything looks clean. I leave the lights on and put Netflix on, Parks and Rec. I can only go to sleep if I know the world is moving on without me, just fine. The mantra is always the same, “There’s still time, there’s still enough time.” I don’t know what the mantra will be when there isn’t.

Jade Sharma was an army brat. She was born in St. Louis, MO and spent most of her childhood in Germany. After struggling with bipolar disorder, she dropped out of school in 8th grade. She lived in Virginia, Delaware, and Japan as a teenager and started taking college courses on base. She attended Temple University for a minute, then went to NYU for a 3 week summer class and never left. She performed spoken word regularly at The Nuyorican Poets Cafe. She now lives on the Lower East Side with her black Pomeranian and is at work on a second novel. 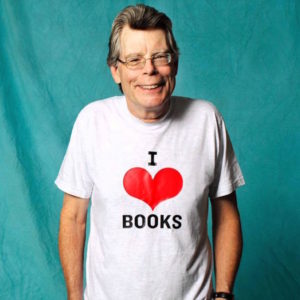 Earlier this summer, Stephen King undertook a hectic multi-city tour of America in support of his latest book, End of Watch....
© LitHub
Back to top