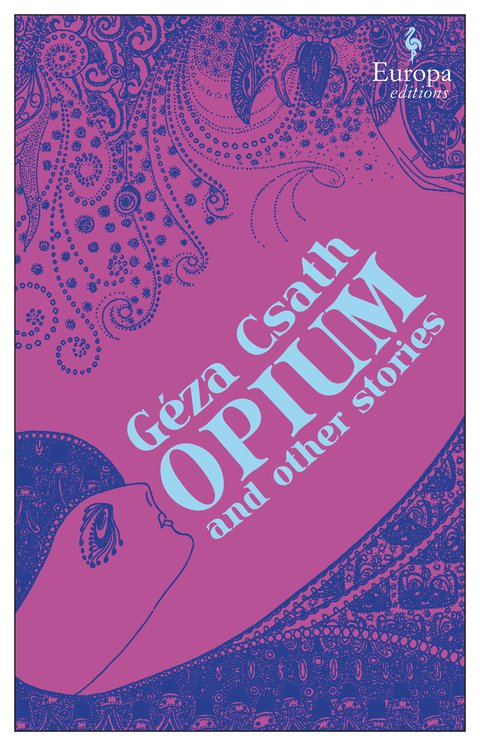 The following is from Gésa Csáth's Opium and Other Stories. Csáth, the pen name of Joszef Brenner) was a writer, playwright, musician, psychiatrist, and physician born in Hungary at the end of the 19th century. One of Sigmund Freud’s first followers, he became interested in the effects of narcotics and developed an addiction to opium. After fighting in WWI, in 1919 he killed his wife and committed suicide. He was 31 years old.

I noticed the surgeon the first time I went to that seedy café on the edge of the town. His one black coat was threadbare, though clean. A scraggly, graying chestnut mustache and large, deep set eyes suited his pale face. His watery eyes glittered with the light of café nights. He spoke softly, almost whispering, as doctors consulting do. During the most casual of conversations, over a piece in the newspaper with one of the customers, say, he would gaze into the other’s eyes. As though taking a special interest in him. His opinion was always delivered in periods too, like instructions to a patient. I was impressed by the aristocratic demeanor of this shabby man, just as I have been by the faded, fine velvets one sees in the antique chateaux of ancient nobility.

—Who is that gentleman? I asked the garçon.

—A doctor. Surgeon once. Been coming over a year now. He heard me calling for one of the medical papers one time, and approached me. Lauded the profession, inquired about the university. We chatted a bit, and he showed himself to be learned. I was particularly struck by some psychosomatic views I’d never read before. I was fascinated by his insights and the imaginativeness which he invested even trivial matters with in talking about them. It surprised me to see how he’d adapted to circumstances, compromised with his life—he even seemed at ease in it. We had our coffee and I left. (I was still in a hurry in those days.)

Once I stopped by late at night. He sat alone, drinking. Eyes shut, he raised the absinthe to his lips with such desirous seeking, draining the green syrup so slowly and pleasurably that I realized the surgeon was alcoholic. More, that he was a confirmed, passionate drunk, lost and drifting steadily towards the DT’s. In that moment I was hit by the odd glint in his eyes, the disinterested gaiety and hairsplitting sharp intellect: the man must once have been very different. Alcohol’s transmogrified him.

He started, seeing me. I saw he was mortified by my presence, a colleague’s. He asked me over. I ordered an absinthe for myself, which relieved him. In a little while I felt the beginnings of a bit of soul-baring; in ten minutes he was deeply into it.

—After all, my friend, what’s most important in life? Why do we suffer? Why do we eat? Why do we love? Why is a man joyful? Because of life. How ridiculous, when life comes suddenly to a halt, and that’s it. But why? What prevents a scientist from completing his work, an artist from exploring his ideas, fathers from seeing their children to maturity? I know why. It’s quite simple: why does time move on? That’s the basic question.

Listen, and I’ll tell you. In the first place, time doesn’t move—we do. That’s been accepted for a long time—Kant knew all about it. There is no such thing as time. But we do have a solid point of reference: we know our body deteriorates, our brain atrophies, sickness kills . . . time exists. As I’ve said, however, there’s no such thing as time.

Next question: where did we get this killjoy perspective from?

Well, it’s no more than a temporary phase in the development of the brain. Embryology offers a wealth of analogy. It so happens that when Man stepped out of the primeval monkey world, he left Nature behind. His brain evolved tremendously. Unbeknownst to us, he picked up attitudes that put himself and the world into a new, shall we say more sophisticated, perspective. Perhaps this new outlook is what destroyed Man’s psychic happiness. Perhaps it’s what put the concept of time into his head. Perhaps this new perceptual dimension, relatively imperfect as it is although absolutely higher—and certainly a mere temporary capacity—is what makes us suppose that it’s time that’s passing. But that’s all temporary, as I say. No need to expound on it: evolutionary phases pass very, very slowly. So we’ve reached this point: time weighs heavy on the human race. And that’s why we’re assaulted by degeneration, by trouble and pain, and death.

Now that’s a serious problem indeed. Time’s poison filters into our philosophy, our art, our ordinary conversation. It’s Man’s twin as soon as he leaves childhood, and stays with him until his life ends. Schopenhauer writes The World as Will and Idea, Shakespeare says, “To be or not to be.” We can be grateful to time for the Fifth Symphony—Beethoven’s Fate Symphony—in which we can hear in that danse macabre theme, all its seconds pouring inexorably away like sand. And all that says no more than what every man banally sighs aloud: Well, well, we’re getting old! Banal.

And here’s my proof. I said, the concept of time becomes the damned goggles of our mind only after childhood. It’s true, really: time’s passage doesn’t disturb the child. Not merely because his body’s resilient and strong and his thoughts occupied otherwise, but primarily because his spiritual development’s much lower. It stands to reason: in the embryo the circulation of the future human being’s blood’s quite simple, it’s got gills in other words, it recapitulates the species’ preceding evolutionary stages. But arriving here, this crudity—imperfection, let’s call it, looking at it from the race’s viewpoint—disappears, because it merely expedites the journey to the stage today’s adult stands at, relatively speaking. But evolution has still to take off from that. The time’s coming when Man will have reached the same level of development today’s child is at, even the full-grown man of today—while still an embryo. And this spiritual embryonic stage is exactly the same as the child’s ignorance of time! But look at the stage when his psyche’s already developed and we see that time has already woven its net over his brain. He can never rid himself of it. In the European this stage comes between fourteen and twenty. It’s easy to visualize a day coming when man will pass through this period in childhood while still an embryo. That will be the day! Till then, what can you do . . . we’re stuck here. Medical science is destined to save the human race from this physical affliction, this suffering. The question is crucial today because people are more than ever before obsessed with time. Not even the struggle of making a living can distract Twentieth-Century Man from this piteous insanity.

We’ve got to do something about it, sir. In cases with similarly excruciating pathological or physiological phenomena surgery doesn’t have to stand by with its arms folded. If this time—craziness never existed before but does now, then it’s obviously located in the center of the brain. But that’s merely a hypothesis I don’t need anyway, because here’s where I stand: I’m the man who can scientifically demonstrate that this substratum of the soul’s development actually is a substratum. I can prove it. I shall find its seat in the brain. I’ll stress the possibility of surgical intervention, its necessity. Finally I make the procedure public: I perform the operation and await the judgment of science on my results.

I have found time in the brain. It doesn’t differ externally from an ordinary brain cell. Yet it’s the nucleus of misery, sickness, the senseless sorrow of passing on. It can be quantitatively greater in one man than another. It elaborates its appendages, its branches and forks like a polyp into the fresh and healthy brain—hence into every aspect of our thoughts.

Of course, this is a great task for the surgeon, but it’s absolutely simple. All we have to know is what to cut. I know it. And I’ll offer my discovery to the man who wishes above all to be rid of time, who is borne down by the idea of passing on. Him I shall help.

I’ll rent a huge operating theater. It will be jammed with observers. In its center we set up the operating table. Three assistants make preparations. The aristocrats of finance and science crowd the hall, mingling with the poor. Finally, silence. I put on my gown; I’m helped into my rubber boots. Calmly I scrub up and give the order; Start the anesthesia! I tie the apron around me and pull on my gloves. Is he out? Good! Blood pressure? Fine! I touch his head. Slowly I make my incision from the base of the skull to the parotid. The audience watches, holding its breath. Binoculars are trained on me. I stop the bleeding, I peel back scalp and muscles in an area about half a palm’s size. Raspatory for the periostal! I have now reached bone. Auger, please! Trepanation. I have made the hole . . . I am at the dura mater. I carefully cut the membrane, fold it aside. With my fingers I penetrate one of the folds, the one I alone know—and extract time.

And as easily as that I just spoon out this evil hornet’s nest of human grief. In a few minutes the whole thing’s finished. I hand the time cells round in a dish. Then I sew up the arachnoid, the pia mater and dura mater, and reset the pieces of skull-bone I’ve cut out . . . tying up the veins. Stitch the scalp, muscles and skin, and dress the wound. I am all done. I waken the fellow. (Here the surgeon rose from his chair and continued almost shouting.) This is the man of the future, the really new man who’s able to solve today’s secrets and tomorrow’s truth with his fresh clean brain. He has total recall because facts don’t pass away for him—they line themselves up as equal powers in his consciousness. The audience applauds wildly. I remove my surgical gown and take my bows in my dove-gray morning attire. The happiness of mankind addresses me, jubilant. In three days’ time the wound’s healed. Why three days precisely? My friend, have you any idea why? It’s quite simple, too.

Because time has exhausted itself! All of the psychic energy stolen from us by the silent madness of mortality is left over for us in the form of tremendous life-energy.

And all the rulers of the world will come to me to be operated on. Sorry, ladies and gentlemen, but the poor come first and so I have to take care of them—besides, their condition’s more critical. Emperors will have to wait their turn, of course.

My discovery’s rather elementary, isn’t it, my dear colleague? Definitely worth having been thought of.

But until the hour for surgical intervention arrives, we are provided with a drug to be taken orally, and which is useful against time, temporarily: absinthe. Merely a symptomatic treatment. We won’t be needing it much longer, since the surgical method’s both radical and excellent. Cheers, my dear colleague!

The Wild, Wonderful, and Poetic World of Ralphie Parker 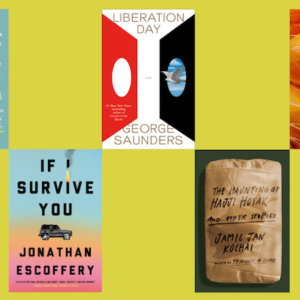 The Best Reviewed Short Story Collections of 2022 We’ve come to the end of another bountiful literary year, and for all of us review rabbits here at Book Marks, that...
© LitHub
Back to top