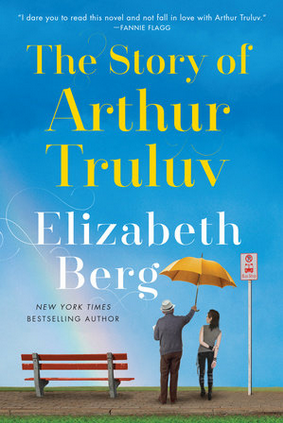 The following is from Elizabeth Berg’s novel, The Story of Arthur Truluv. The Story of Arthur Truluv is a moving novel of compassion in the face of loss, of the small acts that turn friends into family, and of the possibilities to achieve happiness at any age. Elizabeth Berg is the author of many bestselling novels, including Open House (an Oprah’s Book Club selection), Talk Before Sleep , and The Year of Pleasures.

Today he lingers near the headstone of Adelaide Marsh, two rows over from Nola, ten markers down. Adelaide was born April 3, 1897, died November 18, 1929. Arthur does the math, slowly. Thirty-two. Then he calculates again, because he thinks it would be wrong to stand near someone’s grave thinking about how old they were the day they died and be off by a year. Or more. Math has always been difficult for Arthur, even on paper; he describes himself as numerically illiterate. Nola did the checkbook, but now he does. He tries, anyway; he gets out his giant-size calculator and pays a great deal of attention to what he’s doing, he doesn’t even keep the radio on, but more often than not he ends up with astronomically improbable sums. Sometimes he goes to the bank and they help him, but it’s an embarrassment and an inconvenience. “We all have our gifts,” Nola used to say, and she was right. Arthur’s gift is working the land; he was a groundskeeper for the parks before he retired many years ago. He still keeps a nice rose garden in the front of his house; the vegetable garden in the back he has let go. But yes, thirty-two is how old Adelaide Marsh was when she died. Not as heartbreakingly young as the children buried here, but certainly not yet old. In the middle, that’s what she was. In the middle of raising her family (Beloved Mother on her tombstone) and then what? Death, of course, but how? Was it childbirth? He thinks that she was doing something in the service of her family, that she was healthy until the moment she died, and then succumbed to an accident or a sudden insult to the body. He also thinks she had bright red hair that she wore up, and tiny tendrils escaped to frame her face, which pleased both her and her husband. He feels he knows this.

It is happening more and more often, this kind of thing. It is happening more and more that when he stands beside  a grave, his hat in his hand, part of a person’s life story reaches him like the yeasty scent from the bakery he passes every day on his way to the bus stop. He stares at the slightly depressed earth over Adelaide’s grave and here comes the pretty white lace dress she loved best, the inequality in the size of her eyes so light brown they were almost yellow. Tea- colored. It comes that her voice was high and clear, that she was shy to sing for her husband, but did so anyway. She did it at night, after they’d gone to bed; the night before she died, she lay in the darkness beside him and sang “Jeannine, I Dream of Lilac Time.”

And now this: she had a small diamond ring that was her mother’s engagement ring, and Adelaide wore it on a thin gold chain around her neck. It was too small for her finger, and besides, she wanted to keep it close to her heart. Her knuckles were reddened from bleach, her back bothered  her from bending over the washtub to scrub her children clean, but she would let no one else do it; she loved the sight of them wet, their curly hair now plastered straight against their skulls, their cheeks pinkened by the warmth of the water; she loved the way she could hold them close for a long time, like babies, when they stepped out of the water and into her arms, into the blue towel she opened to them like a great bird spreading its wings. No. The towel was not blue. What color was it?

What color was it?

Nothing. That’s it for today. Arthur puts his hat back on his head, tips it toward Adelaide Marsh’s headstone, and moves along. Horace Newton. Estelle McNeil. Irene Sutter. Amos Hammer.

When he reaches Nola’s grave, Arthur opens his fold-up chair and gingerly sits down. The legs of the chair sink a little way into the earth, and he steadies himself, making sure the thing won’t move any more before he spreads his lunch out onto his lap. An egg salad sandwich he has today, real eggs and real mayonnaise, his doctor be damned. And a liberal sprinkling of salt, as long as he was at it.

Often his doctor can tell when he’s been cheating, but not always. Once Arthur ate a whole apple pie covered with vanilla ice cream, and at his appointment the next day, his doctor said, “I’m pleased with your progress, Arthur; whatever you’re doing, keep it up. You’ll live to be one hundred.” Arthur is eighty-five years old. He guesses he does want to live to be one hundred, even without Nola. It’s not the same without her, though. Not one thing is the same. Even something as simple as looking at a daffodil, as he is doing now— someone has planted double-flowered daffodils at the base of a nearby headstone. But seeing that daffodil with Nola gone is not the same, it’s like he’s seeing only part of it.

The earth has begun softening because of spring. The earth is softening and the buds are all like tiny little pregnant women. Arthur wishes Nola were like spring; he wishes she would come back again and again. They wouldn’t even have to be together; he just wants her presence on Earth. She could be a baby reborn into a family far away from here, he wouldn’t even have to see her, ever; he would just like to know that she’d been put back where she belongs. Wherever she is now? That’s the wrong place for Nola Corrine, the Beauty Queen.

Arthur hears a crow call, and looks around to find the bird.

It’s sitting on a headstone a few yards away, preening itself.

“Caw!” Arthur says back, taking conversation where he finds it, but the crow flies away.

Arthur straightens and regards the cloudless sky, a near- turquoise color today. He puts his hand to the back of his neck and squeezes it, it feels good to do that. He squeezes his neck and looks out over the acres and acres of graves, and nobody here but him. It makes him feel rich.

He is folding up his chair, getting ready to go when he sees a young woman sitting on the ground, her back against a tree. Spiky black hair, pale skin, big eyes. Jeans all ripped like the kids do, T-shirt that looks like it’s on a hanger, the way it hangs on her. The girl ought to have a coat, or at least a sweater, it’s not that warm. She ought to be in school.

He’s seen her here before. She sits various places, never near any particular grave site. She never looks at him. She stares out ahead of herself, picking at her nails. That’s all she does. Fourteen? Fifteen? He tries waving at her today, but when she sees him she puts her hand to her mouth, as though she’s frightened. He thinks she’s ready to run, and so he turns away.

From The Story of Arthur Truluv. Used with permission of Penguin Random House. Copyright © 2017 by Elizabeth Berg. 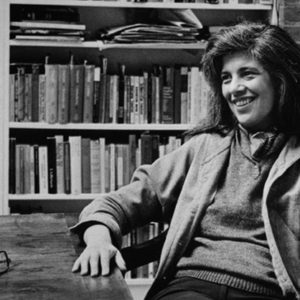 5 Books Making News This Week: Collections, Translation, and Noir The National Book Awards ceremony sparkles with Annie Proulx's pithy remarks (“This is a Kafkaesque time”) and heartfelt...
© LitHub
Back to top