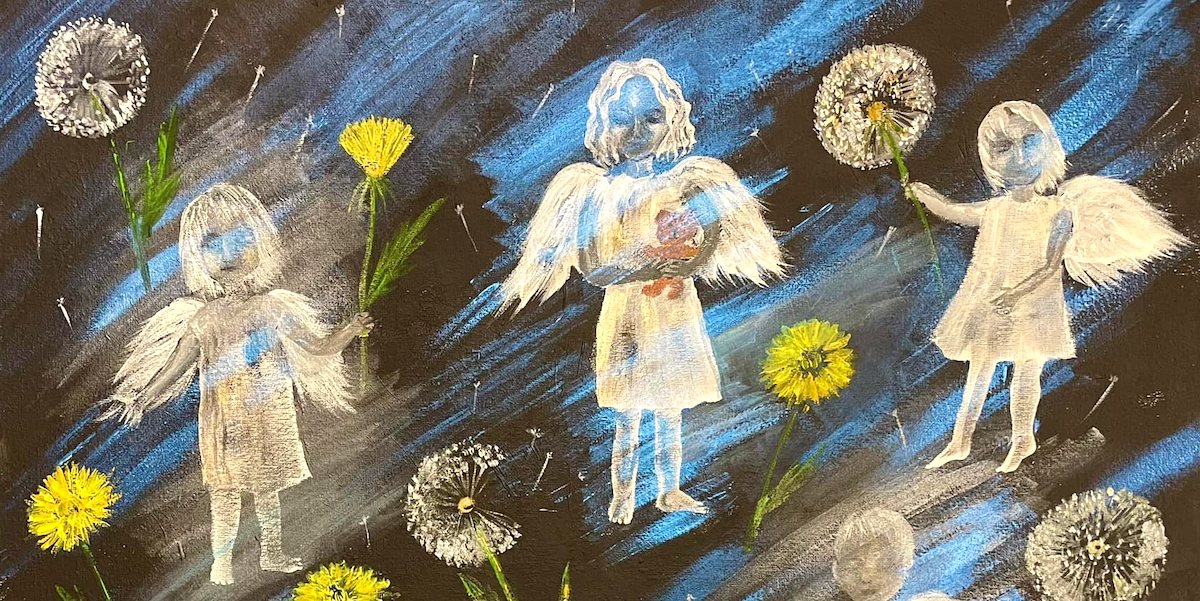 The Spirit of Ukrainian Resistance: Five Poems by Marjana Savka

“As if god’s optics weren’t aiming straight for your heart.”

On the eve of Ukrainian Orthodox Easter, the poet Marjana Savka posted a poem to her Facebook page about an army volunteer who has been struck down by missile fragments.

Here lies the Lord. Slain in a coffin.
The Resurrection, it seems, is off schedule.
He was a volunteer in this last most terrible war.

Ukrainian Orthodox Christians celebrate Holy Saturday, the day before Easter, as a time marked by the sadness over the tragedy of the crucifixion and the anticipation of the resurrection. It is a day of mourning and of delayed joy.

Addressing his country on April 23d (Holy Saturday), President Zelensky, who had imposed new curfews on the expectation that there could be an Easter offensive, said, “It seems that Russa’s gotten stuck on this day. For years. On a day when death triumphs and it’s as though there’s no God. But there will be a resurrection. Life will defeat death.”

Marjana Savka is a visual artist as well as a poet and publisher. Her paintings of angels, posted to social media, have come to embody the Ukrainian spirit of resistance. On March 11, she posted a painting of an angel sheltering children against a backdrop of a ravaged city. She wrote, by way of explanation: “This is Mariupol. This angel has it the hardest.” [Це Маріуполь. Цьому Ангелу найтяжче.]

Savka’s books are works of art in their own right. The poems in her 2019 book, Optika Boha (God’s Optics) are accompanied by doubled illustrations: with the naked eye, the reader sees pleasant social scenes—a family portrait, people feasting, children flying kites, with thinly drawn blue lines in the shadows. 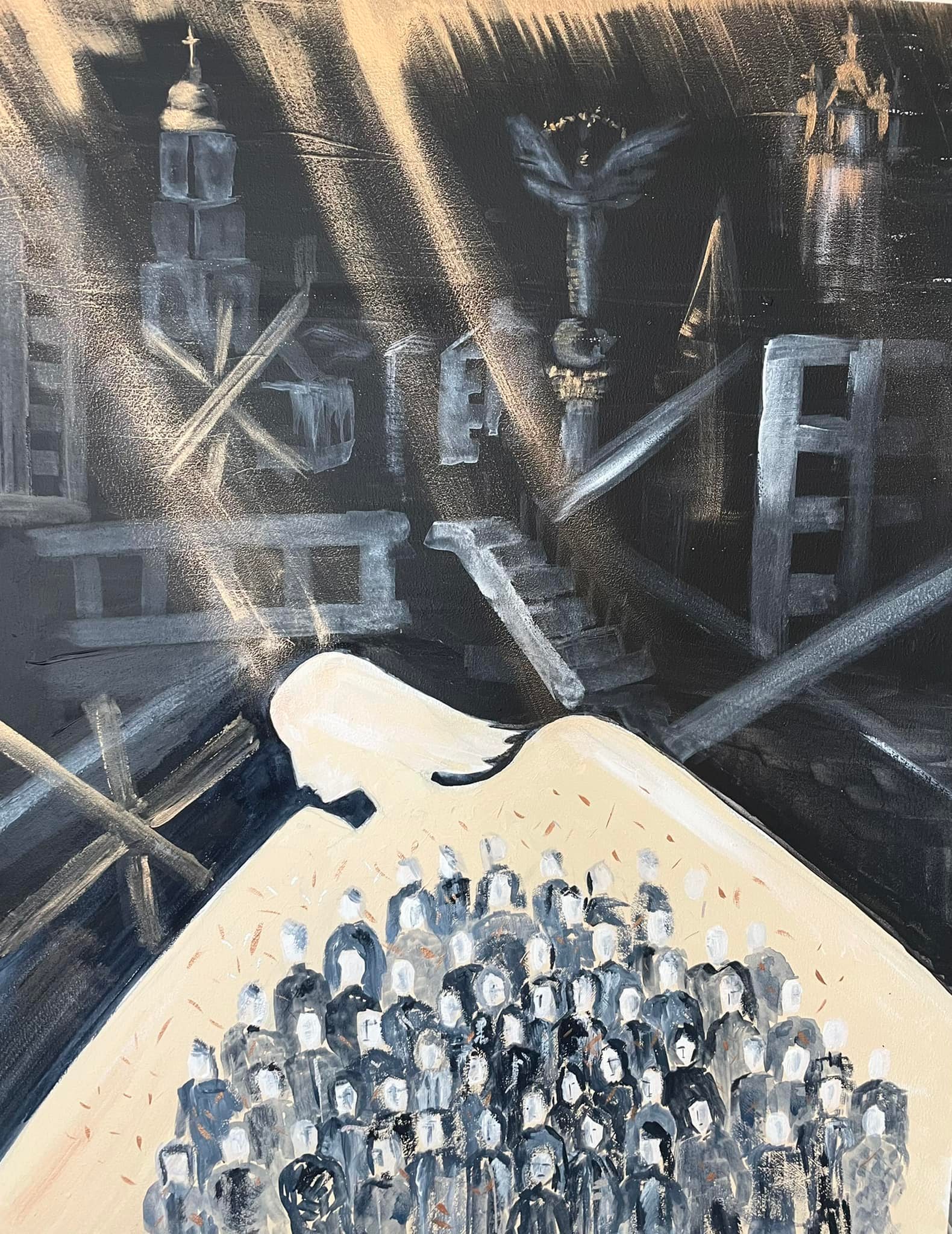 But viewed through the red lens that comes with the book, a shadow picture emerges in blue: a panther drives a family away; a man alone at a table gazes at a paper boat, his companions vanishing into ghostly outlines; Roman soldiers crucify Jesus where the children in red had flown their kites. This double vision—a version of God’s optics—reveals life’s complex mixture of joy and sadness. Appearing five years into the Donbas war, the book hints at the strange reality of joy and loss that can share the same protracted moment.

Savka’s poetic personae are often suspended between the present and the past, between record-keeping and erasure, between the intimate and the public. “what can we talk about,” one poem asks,

In a world where everything feels public, Savka’s poems meditate on the space between intimacy and public display. Like the mournful space between the crucifixion and resurrection, the silences between speech constitute their own faith in the future: “sometimes it’s enough to emerge from your own silence.” 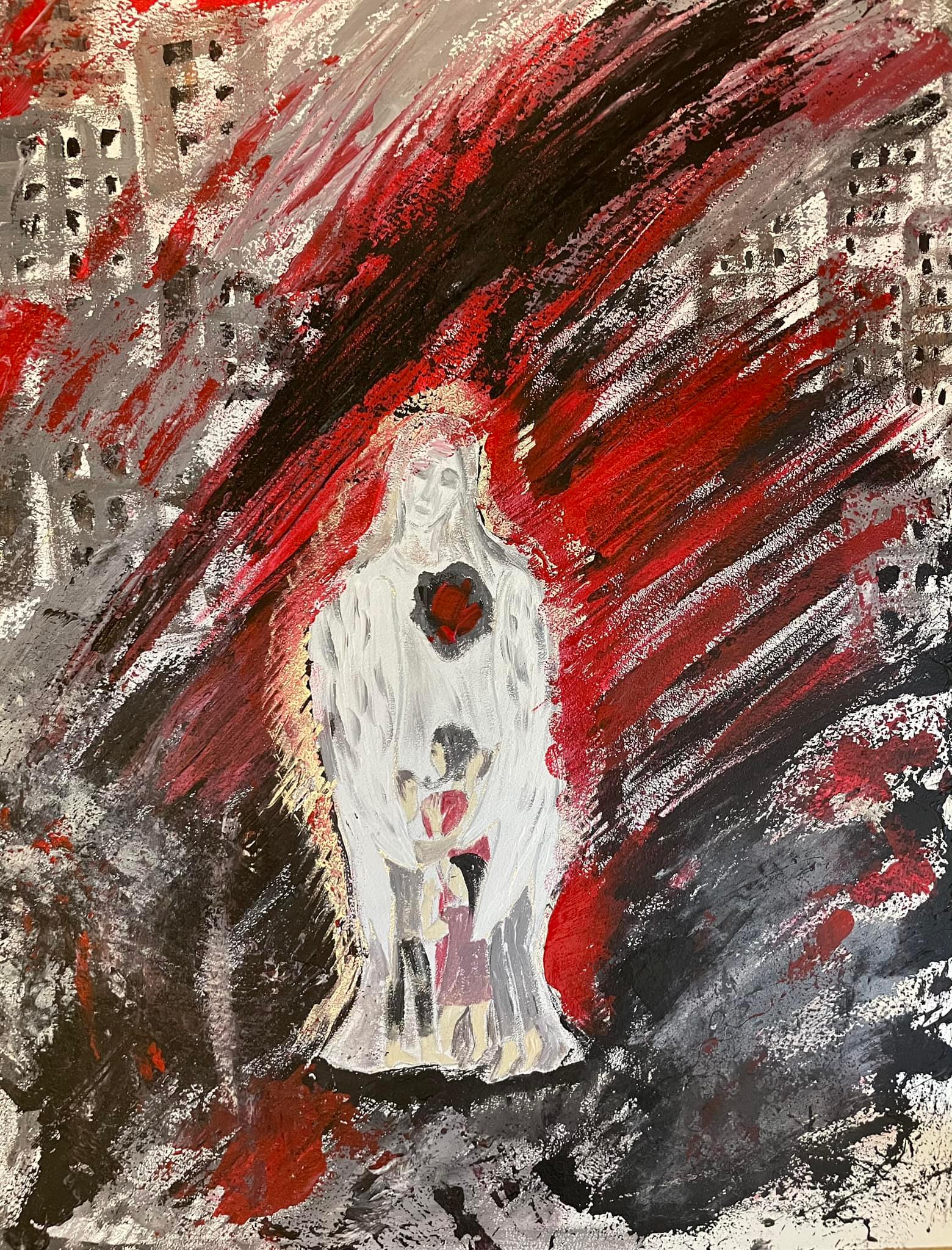 Savka, like many of her colleagues, has mobilized her poetry and her social media followers in defense of her country. Last week she asked her Facebook friends to contribute to a fund for Hikmicro heat visors for Ukrainian soldiers: “You may remember my book, God’s Optics. Now more than ever, words are losing their poetic metaphor and becoming reality. … we are raising money for optics.”

Here lies the Lord. Slain in a coffin.
The Resurrection, it seems, is off schedule.
He was a volunteer in the last most terrible war.
Drove around the city so calm, unarmored
Delivered bread through the hellish traffic.
Told those around him: don’t live in anger.
After all even a horrible criminal has a chance of repenting.
But the sun was setting over the city, behind the hills’ black ridges
And the buildings were burning like dry masts. And the fight
Between the light and the dark might last a while.
He was struck down by a fragment of a missile to the chest.
Beside him lay twelve others, a child among them.
A good fifty people quickly surrounded them.
And they said, Herods spare no one, not even kids.
But they soon left. Because it was already curfew.
Here lies the Lord. He was kind. He divided the bread.
He came from somewhere—from Izyum, from Bucha, from Popasna.
He’s lying in a coffin. We’re awaiting the wonder of wonders.
He asked us not to kill. He walked here among us.
He will rise again. Casting off his cross and vulnerability.
He will rise again and will join our ranks,
Desperate,
Brave,
Familiar,
Alive.

somewhere on the shore of days
between yesterday and tomorrow
we strain our ears to hear
night is the time for listening
we let all the words out of our head—
let them fly
dark little angels
a strange trajectory
navigating between dreams and reality
it’s here somewhere
a stream pool of total silence
we step into it
naked and mute
and silence encroaches
first to the knees
then to the breast
consuming the shoulders
submerging you entirely
god what’s the word
from which everything was born?
… sometimes it’s enough to emerge from your own silence

Time
does it dry up or burn to ash?
the skin under your eyes dries first
announcing your age with the most common convention
verified by indisputable signs of decay
we are inside time’s herbarium
carefully concealed between the pages
the book of life isn’t some brochure
it’s an actual ledger
under its weight everything gets thinner
until it becomes transparent
like the fluorographic X-ray of the flower that remembers

Marjana Savka is a Ukrainian poet, children’s writer, literary critic, essayist, and editor. She is also the co-founder of the publishing house “Vydavnytvo Starogo Leva.” She published her first poetry collection, Naked Riverbeds, at the age of twenty-one. Eight other books, for which she has received several awards, have appeared since then, including four poetry collections and three children’s books. A former actress and journalist, she edited We and She, an anthology of poems by female writers from Lviv, Ukraine. Savka’s poetry is distinguished by the intricate link between life and literature, resulting in a palimpsest of universal tropes and an intimate picture of love. 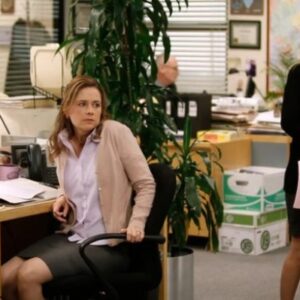 Jenna Fischer and Angela Kinsey on Finding Creative Freedom in The Office The following conversation is excerpted from The Office BFFs: Tales of The Office from Two Best Friends Who Were There by Jenna...
© LitHub
Back to top
Loading Comments...