VIA Kill Your Darlings

The contemporary “road” novel has long been underpinned and undermined by its cringe-inducing valorization of the roguish buck, whose steadfast masculine identity supports his innate lust for adventure. We cherish the pseudonymous Sal Paradise or Raoul Duke for the way they saunter through landscape, maneuvering their way out of any sticky situation, barreling down the Great Unknown in search of the next thrill.

It’s rarer to hear acolytes of Kerouac or Thompson dissect their literary heroes’ identities as cis men, and what that means in the context of gendered space and mobility. If their defining works boil down to showcasing their protagonists’ God-given permission to go wherever and do whatever they want with little visible consequence, are they really that transgressive? Is there anything still exciting about the premise of white cis dudes having wacky adventures all over the place without having to confront their privilege to do so in any meaningful way?

The narratives considered modern classics of that style are often so deeply entrenched in the prescribed notions of heterosexist masculinity and the freedom that comes with it that we rarely question what a journey narrative existing outside those confines might look like. What happens when characters who are queer women, trans folk or other marginalized people traverse a space that is so often hostile to us? The politicization of space makes work that explores journey narratives from these perspectives subversive and radical acts of literature.

The central character of American author Imogen Binnie’s 2013 debut novel, Nevada, is Maria Griffiths, a queer, trans woman living in New York. The first half of the book takes place in a kind of haze as she navigates surroundings that are at once familiar and threatening.

From 5 am diners filled with drunks to an internet cafe where she’s leered at by other customers, Maria’s choices are informed by risk assessment. Will she be “clocked” as a trans person? Will she face harassment or violence as a result? Will she get misgendered?

This anxious inner monologue carries us throughout much of the first half of the book:

Maria’s aggressive veneer of tough monsterness goes up and she stomps through to the table in the back, which is empty, like she’s wading through a river, head down, no reason to stop. Nobody notices her. It’s funny. Nobody ever does any more. It’s just that when they used to, they were so vocal about it that still, to this day, you worry. Sucks. Whatevs.

It’s been her experience that if people look at you and figure out that you are trans, they are pretty eager to tell you.

We see a narrative of resilient defiance emerge throughout the book, and this is perhaps the most immediate way works like Nevada subvert historical literary notions of access to space. While hallmarks of the road-novel genre highlight characters that go wherever they want because of their privilege, works by marginalized people show figures that dare to take up space despite the oppression and restrictions they face.

In Nevada, the physical environments around Maria serve as tangible motifs of her rapid internal dialogue. Navigating New York in a haze corresponds with processing and unpacking her emotions, and later fleeing the city with no planned destination acts as a metaphor for her directionless life course. The search for a sense of belonging appears in road novels often—it’s not a particularly radical notion that the physical journeys characters take are stand-ins for personal growth. The way this manifests in stories written by and about marginalized groups, however, takes on another level of significance.

The complicated internal journey in search of belonging pulses throughout Flaming Iguanas: An Illustrated All-Girl Road Novel Thing. Erika Lopez’s 1998 novel explores the spatial implications of gender, sexuality, and race through the eyes of Tomato Rodriguez, who embarks on a cross-country motorcycle trip from New Jersey to San Francisco. Told through stream of consciousness, we see Tomato process her identity and surroundings both internally and externally.

After one of many near-death motorcycle accidents that occur throughout Flaming Iguanas, we get a peek into Tomato’s brief moment of quiet respite from both her own thoughts and the chaotic hostility of the world around her:

I looked around me and saw only black. I heard sounds like a faraway river, but I knew they were leaves blowing in the sky. For a tea bag moment, everything was as it was supposed to be. I breathed with the trees and felt separated from the collective human consciousness: I didn’t want to conquer anything, didn’t want to build cheap aluminum developments or shopping centers. I felt I belonged and would’ve asked for permission to stay if I’d known how.

In Nevada, that same respite is more difficult to find.

After getting fired from a longtime job and breaking up with her girlfriend, Maria steals her ex’s car and heads west with vague plans and a bag of heroin. She meets James, a teenage boy, and, convinced that the “purpose” of her trip is to guide a potentially pre-transition James through his confusion about gender and identity, Maria sets off with him for Star City, Nevada.

Ostensibly headed towards reckless gambling and drugs, Maria and James spend the car ride unpacking trans womanhood, gender identity and sexuality, and the quiet hum of the car and the road beneath them creates the safe space to engage with these thoughts for the first time.

While neither Maria nor James really has the capacity to provide what the other is looking for, there’s the sense that the two are, for a brief moment, the only people on earth who are on the same page. After a novel’s worth of Maria feeling unable to connect with other human beings, we see these characters edge away from the dissociation that existing in their worlds has created.

The relationships and companionship in journey narratives by queer women are arguably one of the main ways writers subvert the road-novel canon. The bro-centric camaraderie of the genre’s foundations is often central to the discussion, but do the men in road novels really care about one another?

Much is made about the homosocial aspects of On the Road, but on close reader most relationships in these stories are revealed to be superficial, or otherwise built on unhealthy dynamics, and it’s difficult to feel warmly about these bonds. They’re not born from the necessity of solidarity in a hostile environment; most of them are a product of convenience. Is the relationship of the Thelma and Louise not every bit as meaningful than Dean and Sal’s?

Nevada ends without any kind of clear resolution. Maria and James are still in foggy, problematic places in their lives, and some reviews have cited this as a weak aspect of the novel. After all, while neither On the Road nor Fear and Loathing in Las Vegas reach a particularly pleasant conclusion, they don’t leave readers with an overhanging sense of uncertainty.

But if literature that depicts physical journeys of queer women and other marginalized groups is to be an accurate reflection of our lives, can it really have a comfortable denouement? Does it not speak more honestly if, by the end of the road, these characters are still unsure of their place in a threatening world?

This is, perhaps, the way journey narratives by queer women and trans people subvert the genre most profoundly. For the men of the road novel, the thrill of adventure is enveloped by the knowledge that, by its end, things will likely settle down. This is not a reality for marginalized people; and as such, painting the journey as an ongoing process rather than a geographical destination more accurately reflects of our experiences. There are no conclusions.

This essay originally appeared in Kill Your Darlings.

Allison Gallagher is a writer and poet currently based in Sydney. Their writing explores identity, gender and sexuality, and has been published by Overland, Southerly Journal, The Sydney Morning Herald, Potluck and i-D, among others. They regularly overshare their feelings on Twitter at @allisongallaghr. 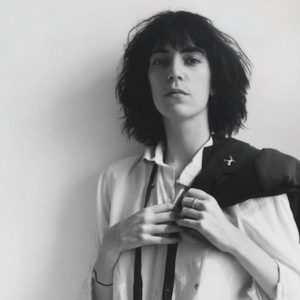 In a candid interview with Victor Bockris published in 1972, Patti Smith laid out her goals as they related in part to her negotiation...
© LitHub
Back to top