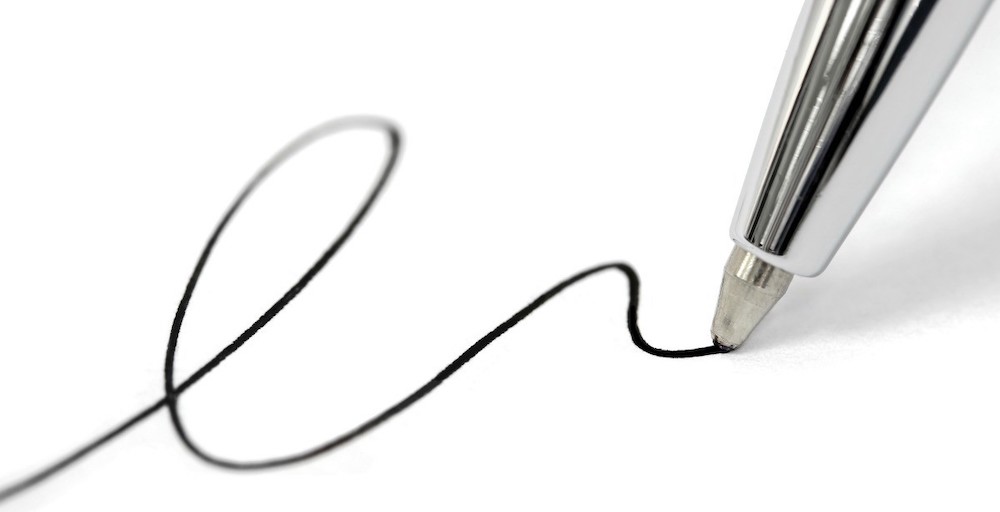 Danielle Taschereau Mamers on the Intimate Act of Mark-Making

One
To write a poignant sentence or a precise description is a joy, but the pleasure of writing is not content-dependent. Making marks is the thing. I have distinctive penmanship—small letters, precisely assembled, compact but not cramped, legible. But sloppier, dashed-off notes come with their own satisfaction, a race between head and hand, stretching out letterforms from small blocks of ink to interconnected shapes that approach the undulating waves of my mother’s cursive.

Two
A slow line made with blue ballpoint across matte white rubber. I am sitting cross-legged in Mrs. Roth’s music class. It’s the first week of grade five. For the first time, I am wearing a fresh pair of shoes for the new school year, having won my relentless campaign to convince my mother to bend her rules around “needs vs. wants” and the September budget. Sitting in class, the unbranded white and blue shoes I had proudly worn around the house to break in the week before suddenly felt awkward. They were clearly not the Adidas sneakers the other girls were wearing. From marking music notes on my worksheet, I moved my pen to my feet and began drawing lines across the rubber edge. Suddenly darkened with ink, the side of my shoe looked bruised: less perfect, not meant to be adored.

Three
A quick note. Blue ink spreads across creamy cardstock, updating you on how well I’m adjusting to life in a new place. I sketch the details of new friends and the exhilarating disorientation of being an ocean away from you, from us. Invisible in the ink of the notecard: I’m thinking of you. Are you thinking of me?

Four
On the right corner of my desk there is a stack of scrap paper where I map out plans for the week. A list of lists fills the left side of the page, one for each day of the week Alongside work I’ve promised to others, the right side of the page collects ideas in the process of forming. It is mostly blank on Monday and Tuesday but thickens with jottings by Friday. This is a space to pause and make marks, to stop the arrhythmic drumming of fingers on keys and to half-formed hopes, quick dashes and dark underlines. Notes to a future self, these scribbled plans are addressed to someone less attached to the lists of lists, less encumbered by contracted tasks and their invoices.

Five
One night when visiting friends on the other side of the country, a rowdy dinner for four (with more empty wine bottles than guests) ended with the table of us taking turns writing. My friend had recently acquired a few fountain pens of varying quality. We each took turns making marks. The weightier of the pens glided across the legal pad, its heaviness creating a forward inertia in my hand. A dense stream of navy ink formed substantive, serious letters. As we passed the pens around the table, we took turns describing to one another the sensation of each pen—how the writing felt in our fingers and wrists. The pleasure was in pen moving across page, leaving behind something of ourselves.

I look down at the neatly spaced upright letters of my own inscriptions and think of my mother’s letters and how they have stretched out over time.

Six
The buzzing of cicadas drifted in through the open windows of the teachers’ room. The room was emptied of everyone but me, the secretary, and the snoring gym teacher (tipped back in his chair, thick arms crossed over his belly). Between periods of overseeing Japanese junior high school students as they copied lines and curves of letters in their English class, I stole time for my own language learning by way of rote writing practice. I made tiny slashes across small boxes, slowly filling in the light blue grid printed on nearly transparent paper. My marks were modeled on the hiragana symbols printed at the top of the child’s workbook pages. I made the same simple shapes over and over again, whispering the single syllable sound of each symbol. Learning to write anew, I watched shapes of a five-year-old flow from my twenty-five-year-old hand and wondered if this will ever come easy.

Seven
My hands on the paper that will be in your hands after a few days, a few weeks, a month. Words from the pen clutched in my fingers will find their way to your hands, into your mouth, into your mind’s eye. I sit with the image of you reading me as I write to you. Holding you close over an ocean, over a life. But not close enough to send more than my inky traces home with you.

Eight
I grip my pen in a strange way. My mother tried to persuade me to correct this when I was younger, unsuccessfully. She warned that gripping my pen against my ring finger with pressure that caused the side of the nailbed to swell was unbecoming and could appear unprofessional in the future. As a university student, I tried to train myself to balance my pen between my index and middle fingers and to write with a more relaxed hand. My retraining regime began during a seminar where I was seated across the table from two very beautiful women, delicate in their frames and pen-holding techniques. I looked down at my meatier hand, gripping my own pen and felt it an extension of my unkempt hair, ratty t-shirts, and stooped shoulders. Imagining how I could close the gap between me and my more beautiful peers, the pen became my starting point. If I could practice gently holding my pen, perhaps that poise would travel up my arm to straighten my shoulders, lengthen my neck, and hint at something more composed within. A few weeks into my experiment, I grew dissatisfied with the halting marks I was making. I returned to the too-tight pen grip and filled my notebook with writing that felt like home.

Nine
On a hot afternoon in late July, I sit down to a stack of new books. It is birthday season for the many Leos in my life. Following the form of my grandmother, hardcover first editions are my principal gift. A bead of sweat creeps between my shoulder blades as I crack open each volume and scratch out a quick inscription. My mind drifts to the four rectangular packages, still wrapped and tied with curled ribbons flattened from cross-country shipping and sitting on the bookshelf of my parents’ guest room. The first pages of each will have the rounded peak of my first initial followed by a stretch of cursive hills. When writing the inscriptions, my grandmother didn’t know they would be her final year of birthday wishes to me. I don’t know when I will be ready to receive them. I look down at the neatly spaced upright letters of my own inscriptions and think of my mother’s letters and how they have stretched out over time, relaxing into the same rolling cursive of her mother’s. I wonder if my own marks will one day loosen into these same elongated curls and loops.

Ten
Slashes, blots, lines, signatures. The square of paper next to the wall of pens is dense with marks. I uncap an unpractically thick black marker. It squeaks as I drag the nib across the paper, dark clouds of ink rolling in across the horizon of paper. I re-cap the marker and peel off the now black paper, revealing a fresh white square. Taking a thin purple pen, I write: Thinking of you thinking of me.

Danielle Taschereau Mamers is a media studies scholar. She writes about art, documents, and visual politics. Her work has appeared in Avidly, Femme Art Review, The Globe and Mail, New Centennial Review, and elsewhere. She is the author of Settler Colonial Ways of Seeing (Fordham University Press, forthcoming). 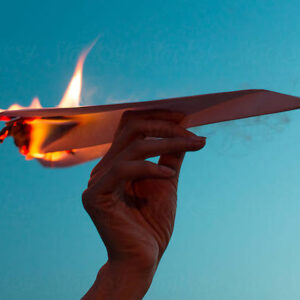 It’s a grey, rainy Sunday afternoon, the first day you’ve had to yourself in weeks. There’s nowhere you need to go, and nothing...
© LitHub
Back to top