Charles Eastman, aka Ohíye S'a: Scenes from a Sioux Boyhood

As cities across the country celebrate Indigenous Peoples Day, it’s worth returning to the writing of Charles Eastman, aka Ohíye S’a, a Santee Dakota who wrote extensively of his life with the Dakota Sioux in northern Minnesota and on the Dakota/Canada border.

One can never be sure of what a day may bring to pass. At the age of fifteen years, the deepening current of my life swung upon such a pivotal day, and in the twinkling of an eye its whole course was utterly changed; as if a little mountain brook should pause and turn upon itself to gather strength for the long journey toward an unknown ocean.

From childhood I was consciously trained to be a man; that was, after all, the basic thing; but after this I was trained to be a warrior and a hunter, and not to care for money or possessions, but to be in the broadest sense a public servant. After arriving at a reverent sense of the pervading presence of the Spirit and Giver of Life, and a deep consciousness of the brotherhood of man, the first thing for me to accomplish was to adapt myself perfectly to natural things in other words, to harmonize myself with nature. To this end I was made to build a body both symmetrical and enduring, a house for the soul to live in, a sturdy house, defying the elements. I must have faith and patience; I must learn self-control and be able to maintain silence. I must do with as little as possible and start with nothing most, of the time, because a true Indian always shares whatever he may possess.

I felt no hatred for our tribal foes. I looked upon them more as the college athlete regards his rivals from another college. There was no thought of destroying a nation, taking away their country or reducing the people to servitude, for my race rather honored and bestowed gifts upon their enemies at the next peaceful meeting, until they had adopted the usages of the white man’s warfare for spoliation and conquest.

There was one unfortunate thing about my early training, however; that is, I was taught never to spare a citizen of the United States, although we were on friendly terms with the Canadian white men. The explanation is simple. My people had been turned out of some of the finest country in the world, now forming the great states of Minnesota and Iowa. The Americans pretended to buy the land at ten cents an acre, but never paid the price; the debt stands unpaid to this day. Because they did not pay, the Sioux protested; finally came the outbreak of 1862 in Minnesota, when many settlers were killed, and forthwith our people, such as were left alive, were driven by the troops into exile.

My father, who was among the fugitives in Canada, had been betrayed by a half-breed [metis] across the United States line, near what is now the city of Winnipeg. Some of the party were hanged at Fort Snelling, near St. Paul. We supposed, and, in fact, we were informed that all were hanged. This was why my uncle, in whose family I lived, had taught me never to spare a white man from the United States.

During the summer and winter of 1871, the band of Sioux to which I belonged, a clan of the Wah petons, or “Dwellers among the Leaves,” roamed in the upper Missouri region and along the Yellowstone River.

In that year I tasted to the full the joy and plenty of wild existence. I saw buffalo, elk, and antelope in herds numbering thousands. The forests teemed with deer, and in the “Bad Lands” dwelt the Big Horns or Rocky Mountain sheep. At this period, grizzly bears were numerous and were brought into camp quite commonly, like any other game.

We frequently met and camped with the Hudson Bay half-breeds in their summer hunt of the buffalo, and we were on terms of friendship with the Assiniboines and the Crees, but in frequent collision with the Blackfeet, the Gros Ventres, and the Crows. However, there were times of truce when all met in peace for a great midsummer festival and exchange of gifts. The Sioux roamed over an area nearly a thousand miles in extent. In the summer we gathered together in large numbers, but towards fall we would divide into small groups or bands and scatter for the trapping and the winter hunt. Most of us hugged the wooded river bottoms; some depended entirely upon the buffalo for food, while others, and among these my immediate kindred, hunted all kinds of game, and trapped and fished as well.

Thus I was trained thoroughly for an all-round outdoor life and for all natural emergencies. I was a good rider and a good shot with the bow and arrow, alert and alive to everything that came within my ken. I had never known nor ever expected to know any life but this.

In the winter and summer of 1872, we drifted toward the southern part of what is now Manitoba. In this wild, rolling country I rapidly matured, and laid, as I supposed, the foundations of my life career, never dreaming of anything beyond this manful and honest unhampered existence. My horse and my dog were my closest companions. I regarded them as brothers, and if there was a hereafter, I expected to meet them there. With them I went out daily into the wilderness to seek inspiration and store up strength for coming manhood. My teachers dreamed no more than I of any change in my prospects. I had now taken part in all our tribal activities except that of war, and was nearly old enough to be initiated into the ritual of the war-path. The world was full of natural rivalry; I was eager for the day.

I had attained the age of fifteen years and was about to enter into and realize a man’s life, as we Indians understood it, when the change came. One fine September morning as I returned from the daily hunt, there seemed to be an unusual stir and excitement as I approached our camp. My faithful grandmother was on the watch and met me to break the news. “Your father has come—he whom we thought dead at the hands of the white men,” she said.

It was a day of miracle in the deep Canadian wilderness, before the Canadian Pacific had been even dreamed of, while the Indian and the buffalo still held sway over the vast plains of Manitoba east of the Rocky Mountains. It was, perhaps, because he was my honored father that I lent my bewildered ear to his eloquent exposition of the so-called civilized life, or the way of the white man. I could not doubt my own father, so mysteriously come back to us, as it were, from the spirit land; yet there was a voice within saying to me, “A false life! a treacherous life!”

In accordance with my training, I asked few questions, although many arose in my mind. I simply tried silently to fit the new ideas like so many blocks into the pattern of my philosophy, while according to my untutored logic some did not seem to have straight sides or square corners to fit in with the cardinal principles of eternal justice.

My father had been converted by Protestant missionaries, and he gave me a totally new vision of the white man, as a religious man and a kindly. But when he related how he had set apart every seventh day for religious duties and the worship of God, laying aside every other occupation on that day, I could not forbear exclaiming, “Father! and does he then forget God during the six days and do as he pleases?”

From From the Deep Woods to Civilization: Chapters in the Autobiography of an Indian, by Charles Eastman, 1916. Featured image: detail from a Sioux buffalo-beaded hide robe.

Charles Eastman was a Santee Dakota doctor who wrote extensively on his early life as a Dakota Sioux, and was active on behalf of Native American rights and education. 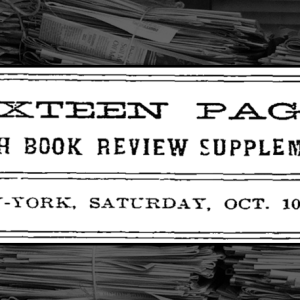 Why the Nobel Prize deservedly went to Svetlana Alexievich, emotional excavator, genre inventor, and fourteenth woman...
© LitHub
Back to top