Boston, the Summer of 1968, Screaming Teenagers...

It’s possible that no one besides Peter Wolf has heard any recording of Van Morrison’s various Boston lineups since they toured around New England in the summer of 1968. Even the musicians who made up the Belfast singer’s first steady, American live band haven’t heard Wolf’s bootleg. Wolf himself hasn’t listened to his tapes of the Van Morrison Controversy performing at the Catacombs in over a decade, as he explained to me while staring at the boxes containing the reels on his bookshelf.

After I publish a brief account of meeting with Wolf, conjecture about these Boston tapes bubbles up on assorted online message boards and the pages of Uncut magazine, but no one brags about hearing them. What did the Astral Weeks songs sound like before producer Lewis Merenstein’s jazz ringers got hold of them? Was the album’s timeless vibe invented on the spot, in the studio, or was the foundation laid down in Boston? And what did the songs sound like before Van had his midsummer night’s dream about getting rid of electric instruments?

Online, the bottom of an old Boston Tea Party poster, for a series of 1968 shows, catches my eye: “The Van Morrison Controversy and The Road Light Show can be seen on WGBH-TV, Wednesday May 29th, 7:30 PM–8 PM.” Could audio and video of a Boston lineup be moldering in the basements of WGBH? David Atwood, who directed WGBH’s Mixed Bag—a half-hour show presenting local rock and jazz bands—is the man who would know. A natural archivist, Atwood has a home collection of tapes of his directorial work, and a pocket calendar detailing what he did every day at WGBH. Consulting his notes, he confirms that the show aired that night. My hopes start to soar, even after he tells me that the episode is not in his personal archive, but might be in WGBH’s. A few days later, bad news: This episode is nowhere to be found.

In 2016, the rest of Van’s Boston players emerge from the woodwork, eager to talk. One of them is drummer Joey Bebo, who multiple sources claimed was deceased. Over a plate of nachos, Bebo jokes that for all this time he thought they had all disappeared. Now retired from his job as a computer programmer, he’s become a prolific writer of what he calls technothrillers. In one, a scientist discovers a powerful telescope, then goes missing. Plot twists ensue. By the time he’s rescued, he’s invented “a ray to look back into the past.”

Bebo arrived from Plattsburgh, New York, to attend the Berklee School of Music in 1966. In the early spring of 1968, one of his classmates, bassist Tom Kielbania, invited him to audition for Morrison. Bebo wasn’t thrilled at first, dismissing Them’s “Gloria” as “teenybopper stuff.” But he was in no position to turn down a paid job: His parents had caught wind of his penchant for pot, and he felt the pressure of supporting himself. “If it wasn’t jazz or serious soul, I just wasn’t interested,” Bebo recalls. “I was about to work with one of the best songwriters and singers of all time and I didn’t have a clue.”

En route to guitarist John Sheldon’s home off Harvard Square, Bebo and Kielbania got stoned out of their skulls. The sideburned Bebo looked like a pirate, in purple shirt and bell-bottoms; Sheldon gave off the vibe of a “preppy vampire” in his red blazer; Kielbania had stringy hair, dark shades, and frumpy clothes. Van sat silently in the corner. When it was time to play, they ripped into “Gloria,” Bebo keeping his eyes on Van, looking for tempo and dynamics. Next up in the audition: “Brown Eyed Girl,” featuring an aggressive rock guitar line, Bebo says, like “Jimi Hendrix meets Bob Marley.” Bebo got the job.

The band learned more than two dozen songs for their summer tour. In the weeks leading up to the first show, there were backyard games of Frisbee and lunches in Harvard Square. But even during breaks, it was difficult to get Morrison talking. The only time you could get definitive opinions out of the singer was by asking him about other performers. Tom Kielbania would mention another band, and Morrison would usually sum them up as “those faggots.” The trash talk would flow freely after Morrison had a few drinks. Bebo remembered Van saying that he couldn’t smoke dope due to “burning my brain on hash when I was younger.” (Janet Planet concurred with this assessment. “He was absolutely drinking back then. Alcohol is definitely his drug of choice. He doesn’t need anything to expand his mind any further. . . He needs the downer—the closer-offer.”) Bebo says Morrison drank heavily before taking the stage, every single show.

“I had never been in a group that did everything together like this before,” Bebo says. “Most of my career I simply showed up for work with my drums and that was the extent of it. Van’s band was different.” Another difference was the pay. Bebo got $150 a week for rehearsal and $150 per show, no matter what the end-of-night payout was. (Kielbania recalls it as being $50.) Morrison also employed two roadies for each performance.

For Bebo, who had recently visited Van and Janet’s less-than-palatial Cambridge digs, this was a confusingly large sum. Where was it all coming from? Eventually he pieced together that Morrison already had financial backers by the start of summer. According to Janet Planet, a Boston-based music manager named Richard asked Van to move to the city, play some gigs, and be managed by him. “He was not affiliated with a company at all,” she says. “It turned out he was not an effective manager, although he certainly got us out of a tight spot in [New York].” But Morrison jettisoned Richard after realizing he was “a complete whacko” who told at least one band member that he was associated with the Cosa Nostra. Kielbania says a man named Frank booked all of Morrison’s New England concerts that summer.

Regardless of who was funding the touring, or how much money exactly was behind it, many elements of it remained shoestring. The band crammed into a junky van to drive out of the city for their first show together at the Rainbow Ballroom and Rollerdome in Hyannis Port on Cape Cod. Finally warming up to his new bandmates, Morrison told them stories of touring with Them. At the Rollerdome, Morrison, Bebo, and Kielbania drank beers in the van while Sheldon and the roadies set up. A cop knocked on the window: It was against the law to sit and drink in a parked car. He pulled them out of the van for questioning in front of a line of kids waiting to get in to see them play.

The manager kicked up a fuss, asking if the cop knew that the man in the van was a star; the cop said he didn’t care if they were the Beatles. The promoter brought up the fact that the police were getting paid to oversee a concert tonight, and if Van Morrison and his players were going to be arrested, there would be no show. Morrison fumbled through a mea culpa: “We didn’t mean disrespect. We do it all the time back home.” The police finally dropped the act, and the band rushed to the stage, where a throng of teenage girls had gathered. Bebo thinks Morrison was especially nervous during the incident with the cops because of deportation fears. The anxiety turned electric when the band started playing—“sizzled like cooked bacon,” per Bebo. When the band closed with “Brown Eyed Girl,” the audience erupted. As the band exited the Rollerdome, one of the cops said, “Not bad.”

Packing up, Bebo saw Morrison do something odd. “There were a few girls standing around, all teenyboppers. All young girls. And Van goes up to one of them and he whispers in her ear. And her eyes go wide and she quickly walks away like she’s scared.” What did he say? Bebo doesn’t know, but says he witnessed it a few times that summer. “I’d see him go up to a young girl, whisper something, and it was always the same reaction, every single time.”

Everyone in the band agrees that, along with the Astral Weeks songs, both “Moondance” and “Domino”—future Morrison classics—were written and developed that same summer as well. According to guitarist Sheldon, he and Van first stumbled upon “Domino” at the Boston Tea Party, fooling around onstage before the audience was admitted. It was based on Sheldon “playing a lot of treble on the guitar and playing something that sounded like ‘Mona,’” the Rolling Stones’ version of a Bo Diddley song. Morrison was on drums as Sheldon chimed out the chords. “He swung this mic over and started singing. And the song came from there. As soon as he finished he said, ‘That’s a real motherfucker.’”

Drummer Bebo confirms that the band performed an extended version of the song that, with young Sheldon’s affinity for feedback, came off like a “musical paroxysm.” Sheldon also remembers messing around with a Grant Green song called “Lazy Afternoon” at one rehearsal; Morrison requested some alterations, and began singing a melody that would eventually morph into the song “Moondance.” Kielbania corroborates this version of events. His favorite moment from 1968 was playing “Moondance” for the first time in Cambridge: “New song. Same bass line ever since.”

The band was remarkably busy that summer, playing at rock clubs, roller rinks, high school gyms, amusement parks, and outdoor festivals. One former Wayland High School teacher and some of his former students patch together their memories of the evening: He threw a temper tantrum onstage about feedback. He was paid $400 for the performance and someone stole his microphone after the show. Meanwhile, at the Psychedelic Supermarket, the Tea Party’s dumpy competitor, Morrison tried to quit before playing the final set. Less than ten people were in the audience, but owner George Papadopoulos demanded that they finish. Morrison countered that Papadopoulos had promised at least a hundred people, a fact the club owner denied. “Van exploded, packing as many f-words as he could into the next few short sentences,” Bebo recalled. “I had never heard such an outburst at that point in my life.”

Bebo explains what happened next: Van, “in a foul mood, with his back to the small audience that had finally started to arrive, turned it into a stressful rehearsal, stopping us in the middle of the songs and changing the tempos halfway through the choruses.” A young musician from Salem named Ed Morneau remembered this specific show, its sour atmosphere still shading his opinion of the singer to this day: “He performed a few tunes, then walked off. People were pissed. I immediately disliked him and still do.” John Sheldon’s overall memory of the entire summer is something akin to that night at the Psychedelic Supermarket. “It was just on the edge of madness,” he says. “It’s a miracle we played anywhere, it’s a miracle we got to any gigs at all.” 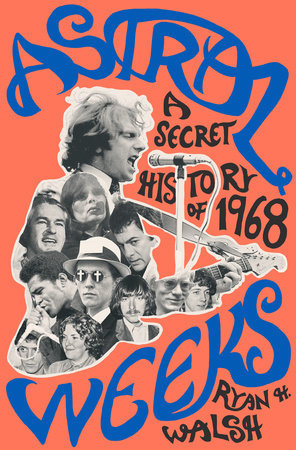 Ryan H. Walsh is a musician and journalist. His culture writing has appeared in the Boston Globe, Vice, and Boston Magazine. His rock band Hallelujah the Hills has won praise from Spin magazine and Pitchfork; collaborated on a song with author Jonathan Lethem; and toured the U.S. extensively over their 10-year existence. He lives in Boston with his wife, the acclaimed singer-songwriter Marissa Nadler. 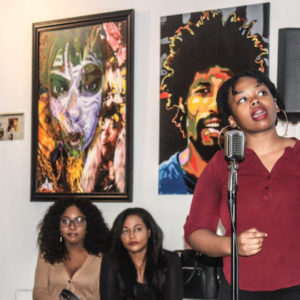 At Chicago’s the Artist Lounge Open Mic one night last July, basslines and soul bumped hard to usher in poet and DJ Johnetta...
© LitHub
Back to top
Loading Comments...