VIA UNIVERSITY OF TEXAS PRESS

The Odd, True Love of Vic Chesnutt and Kristin Hersh

Amanda Petrusich on the Friendship of Two Indie Rock Icons

If the 1990s had a reigning ethos, it was apathy—or at least that was the party line repeated by the press, trotted out again and again to describe the supposedly listless temperament of the decade’s youth. It was presumed that everyone born into Generation X was combative but disengaged, a slacker-malcontent with an armoire full of flannel and a blank stare. The soundtrack was apropos: there was the icy disaffection of Sonic Youth, the existential whine of Nirvana, the mumbled, indolent refrains of Beck.

And then there was Vic Chesnutt: feeling everything, pawing at an acoustic guitar, singing the kinds of songs that made you want to cover your mouth with your hands, they were that honest.

Vic Chesnutt was born on November 12, 1964, in Jacksonville, Florida, and was reared about 300 miles north, in Zebulon, Georgia, where he moved with his adoptive parents at age five. By all accounts, Chesnutt was a funny and occasionally desperate kid, and he flourished under the gentle tutelage of his grandfather, a country singer and guitarist who introduced Chesnutt to the more nourishing qualities of music. In 1983, at age 18, Chesnutt was in a brutal single-car accident—he’d been driving drunk, he later said—that left him almost entirely paralyzed from the neck down, although he did eventually regain limited use of his arms and hands, enough to hit a crucial handful of chords on a guitar.

In 1985, Chesnutt relocated to Athens, Georgia, the tiny university town that nurtured so-called college-rock titans like R.E.M., Neutral Milk Hotel, Elf Power, and the B-52s. There, Chesnutt met Michael Stipe, an early champion of his songwriting; Stipe ultimately produced Chesnutt’s debut record, Little, which was released by Texas Hotel Records in 1990. “Speed Racer,” one of that album’s most beloved songs, showcased Chesnutt’s atheism, the tenets of which would pervade his lyrics for the next 25 years: “I’m not a victim / I am an atheist,” Chesnutt wailed over a few strummed chords. Then an electric guitar riff appeared, as if piped in from a malfunctioning AM radio in another room.

For 16 more albums and EPs, Chesnutt sang in a crooked, southern way about darkness and pain. Jon Pareles, writing in the New York Times, said that Chesnutt’s songs were about the “inevitability of collapse and decay,” and there is a sense, listening to him sing, that his primary creative prerogative was to remind his listeners that we are all rotting away, every single moment that we are alive, and the whole of human existence is merely a long, ridiculous creep toward the same stupid end. When he was performing, he had the comportment of a person who had looked—and I mean really looked—into some kind of void. Who gets access to that vantage, and why, is an impossible thing to reason out, but proximity to that type of darkness changes a person. There was a slackness in his eyes sometimes, a droop that betrayed a truth no one wanted to see or believe: it doesn’t matter if I live or die, it said, and—there was that glint, the puckish flash—it doesn’t matter if you do, either. It’s reductive to attribute Chesnutt’s particular anguish to his paralysis (he’d exhibited signs of severe depression before the crash, and attempted suicide as a teenager), but his immobility made that pain outwardly palpable. It almost—and this is a hideous thought—felt justified, like he’d earned it. Of course, the people who loved him bucked that idea, violently.

Chesnutt spent a good chunk of the mid-1990s traveling the globe with Kristin Hersh, the front woman of the rock band Throwing Muses, as the opening act on one of her solo tours. Hersh was born in Atlanta to a pair of hippie parents (her grandparents, meanwhile, were strict southern Baptists) and was raised in Rhode Island; like Chesnutt, there is something unmistakably southern about her work, something cracked and bluntly soulful. In 1995, Rolling Stone called Throwing Muses “one of alternative rock’s most influential but underappreciated groups,” but by 1997 Hersh had settled into a solo career and was exploring an array of creative options, playing everything from Appalachian folk ballads to lead guitar in the aggro power trio 50 Foot Wave.

In Hersh’s memoir of her time with Chesnutt, there’s a scene in which she smashes a bag of cinnamon candy onto Chesnutt’s windshield, and what seems like an amiable road gag becomes an extended metaphor for her furious attempts to get Chesnutt to recognize, if not embrace, the tremendous sweetness of being. It’s right here, she tells him, over and over and over again. It’s right here. She does this work ferociously, and with the wild and propulsive tyranny of someone who knows that she is doing an important and difficult job. “Grab sugar wherever it falls” is how she first puts the idea to him. (Moments later, he tells her that it’s “the gayest thing” she’s ever said.)

The exchange reminds me—in its purity and vigor—of the way we sometimes try too hard to get the wrong people to love us, and how their reluctance only makes that desire deeper and more urgent. “You can’t imagine how good this will be” is all we can think in that hot, panicked moment, and so we plead: “Just try it. Just try me.” But fear of sweetness, fear of life—it’s such an impossible thing to conceive of when you’re standing on the other side of it. Chesnutt wore his disavowal of it proudly, like a medal. “I, I, I, I, I am a coward,” he hollered in “Coward,” a spare, arresting track from his penultimate LP, At the Cut. He was not an easy person to love, or be loved by, but he and Hersh seemed to recognize something in each other—maybe a shared impulse to articulate something true about the world, maybe a shared sense of being lost in it.

And so it turns out that Kristin Hersh and Vic Chesnutt were the exact right people for each other, at least for a while. They had a deep and devastating relationship, an oddball camaraderie of two independent-minded songwriters working at the margins of popular music. Hersh’s remembrance of their tours together proffers insight into many things (music, marriage, mental illness, love, big ideas about home and the passage of time), but she is concerned mostly with friendship. These types of heavy platonic alliances, the ones uncomplicated by sex or romance—they don’t get nearly enough airplay. They can be as formative and influential as the great loves.

From DON’T SUCK, DON’T DIE by Kristin Hersh. Used with permission of University of Texas Press.

Amanda Petrusich is the author of Do Not Sell At Any Price: The Wild, Obsessive Hunt for the World’s Rarest 78rpm Records, It Still Moves: Lost Songs, Lost Highways, and the Search for the Next American Music, and Pink Moon an installment in Continuum/Bloomsbury’s acclaimed 33 1/3 series. She is a contributing writer for Pitchfork and a contributing editor at The Oxford American; her music and culture writing has appeared in The New York Times, The Atlantic, Spin, BuzzFeed, and elsewhere. 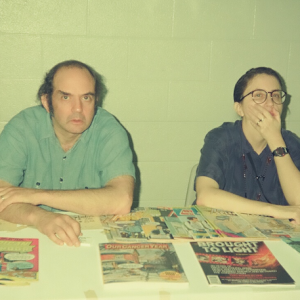 Kenzaburo Oe gets stuck on a street corner in America and finds a hero in Huckleberry Finn. | Literary Hub Svetlana...
© LitHub
Back to top