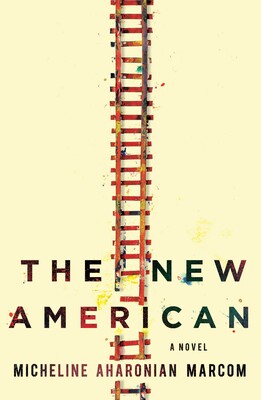 The following is excerpted from Micheline Aharonian Marcom's new novel, The New American. Marcom has published six novels, and has received fellowships and awards from the Lannan Foundation, the Whiting Foundation, and the US Artists’ Foundation. Her first novel, Three Apples Fell From Heaven, was a New York Times Notable Book and Runner-Up for the PEN/Hemingway Award for First Fiction. Her second novel, The Daydreaming Boy, won the PEN/USA Award for Fiction.

He is on the bus. The old Blue Bird school bus slowly climbs the steep and winding dirt road as it leaves the green misty valley of Todos Santos behind on its way to Huehuetenango two hours away, but he cannot see any of it through the windows in the darkness. In the seats near him, women hold their babies and toddlers and the old men hold their straw hats in their laps, bound chickens squawk and crik from their baskets overhead. The bus is filled with people of all ages and with their things tied up in big cloth sacks and cheap plastic bags. The engine is loud and cranks and the bus is crowded and cold and he wonders again how many days it will take to arrive and can I ever get it all back?

He had dressed carefully in the hour before dawn at his great-aunt’s house in dark blue jeans, a long-sleeved shirt, a tee shirt beneath that, new white tennis shoes with a red stripe sewn onto their sides, and his red baseball cap. He grabbed his nylon jacket at the last moment, and although it is the beginning of the warmer rainy season in the Highlands, the old bus is damp and unheated, and he is glad he is wearing it. He had already decided to bring the silver wristwatch his mother gave him three years ago when he graduated from high school and he turns his left wrist and looks at it: 5:20 am. He holds his small green backpack tightly on his lap.

Inside his old school pack he carries a plastic bottle of water, two lollipops he bought yesterday with his cousin’s children from a market stall, a paperback novel, a new journal (where he plans to keep a record of this journey), and a ballpoint pen. He carries an extra tee shirt, two changes of underwear, one pair of white athletic socks, a toothbrush, some paste, and a small piece of hard soap he had wrapped in a scrap of paper. He has four hundred dollars U.S. hidden beneath the insoles of his tennis shoes, two hundred in each shoe, all of what had remained in his bank account in California, and three hundred quetzales tucked into one of the pockets of his blue jeans. He carries another forty dollars in the other pocket along with a small color photograph of her folded between two ten-dollar bills. He thinks of the things he now carries on this bus and of what he left behind in Todos Santos: several pairs of blue jeans, tee shirts, the traditional red-striped pants and handwoven shirt his aunt purchased for him upon his arrival in town two-and-a-half weeks ago (without it, Emilio, you won’t look like one of our men, she’d said), a second pair of tennis shoes, three books he was assigned at university last term, his school ID, his old mobile telephone, his bank card. He thinks of his cash, his silver watch, the red cap and green pack and the book and journal and pen and how some things transit the earth easily and others do not. And he thinks how Aunt Lourdes will soon rise from her bed and discover his absence when she doesn’t find him in the main room on the sleeping pallet she borrowed from her eldest son, Anselmo. How she will walk next door and give Anselmo the news and his cousin will thereupon phone Berkeley and how his mother and sisters in Berkeley will begin to worry, as perhaps will she if she is apprised of it. Yet even so he will not call or contact his family or his girlfriend until he has made it a good distance from here: his mind is set on this course of action and he will follow it. And the winch he has imagined took residence inside him last February, ponderous and metallic, abutting his sternum, turns and pulls a wire from his bowels toward his stomach until his throat also cinches and he puts his hand into the jeans pocket with the quetzales and finds and fingers the white stone Antonia found for him on a beach in Northern California four months ago and he carries it back with him to the North.

He saw her standing atop the low seawall. Light brown hair pulled back into a ponytail, long legs in tight blue jeans, and a smile of hello in her blue eyes. She looked happy. He shouted out to her not to go into the ocean because the tide was unpredictable and she might drown. She replied that it was safe and warm and that she was a strong swimmer and she jumped off of the low seawall fully clothed into the water below and although they were at Muir Beach the sea looked different, calmer and darker blue, abutting the stones. He felt suddenly terrified and yelled out her name, but he didn’t jump into the water after her because of the paralysis the terror caused in his body and the tide rose and took her from him. She was saying something he couldn’t hear as she drifted farther and farther out, wave upon wave, to another place in the long distance, and he felt again his grief and rage and loneliness. He wanted to follow after her, he thought perhaps she might drown, but he remained where he was next to the seawall. He saw the back of her head like the head of a small sea lion far out in the dark blue water, near the light blue sky, as she drifted now onto the widest part of the ocean. Where has she gone? he thought.

Emilio awakens as the bus pulls into the parking lot of the busy terminal in Huehuetenango and cuts its engine. The sun has risen in the sky and lights up the brightly painted yellow concrete building and the dozens of red, blue, and green Blue Bird busses parked in front of it; people mill about everywhere he can see. He disembarks amid the commotion of engines and travelers and hawkers selling their wares and asks around for buses to Xela. An older ladino driver tells him the next one will not come for at least an hour because one just departed.

He will not call or contact his family or his girlfriend until he has made it a good distance from here: his mind is set on this course of action and he will follow it.

How long does it usually take from Huehue?

Depends on how fast you take the pass, the driver says. Three, four hours.

Emilio finds a place to sit and wait next to a man and his wife on a small bench near the open doorway inside the terminal. He takes off his nylon jacket, unzips his bag and pulls out Great Expectations and a yellow lollipop, and he stashes the jacket inside the pack. The candy is sweet and assuages his hunger, but he realizes after staring at the same page for several minutes that he is too unsettled to read and he puts the novel away again and hopes time will pass quickly while sugary saliva fills up his mouth.

He looks around at the old abandoned ticket stalls, at the cracked tile floor, at the light blue paint peeling off of the dirty, stained walls of the waiting area. He sees the old, the middle-aged, adolescents and small children, indigenous and ladino travelers sitting and standing and walking around. He can hear the revving of the brightly painted school busses when their engines start up and their belts begin to whir loudly; he can make out some of the busses’ monikers through the open doorway in the bright sunlight. The names are painted in large, black cursive letters across the top portion of each windshield, Esmerelda Mi Amor, Mi Pepa. He bites off a piece of hard yellow sucker and as he chews it he wonders idly about the American schoolchildren who rode around in these very busses (maybe I took one to Jefferson Elementary a decade ago?) in American cities years before they were retired from use and sold down here and repainted, retooled, and given individual names in preparation for intrastate travel.

Within the hour most of the busses depart and the terminal empties of most of its passengers. In the temporary lull Emilio notices an indigenous hawker walking around with a large burden of goods. Clay necklaces and stone bracelets hang from her thin arms, colorful wool blankets stack high onto her left shoulder, and a red-and-green-striped rebozo slung across her other shoulder holds a small hump of a child at her back. The child’s head and most of its body are covered by the fabric, and two bare feet dangle down the small lady’s spine. The blanket-seller passes in front of him now saying necklaces señor, bracelets for your señora, as if an entreaty. He shakes his head no and she petitions him again and not until the third failed appeal does she turn and walk deeper into the terminal building offering her goods to the air. Emilio thinks for a moment he can hear something else retreating in space with her form, softly interpolating her continual refrain, but then it, like she, moves out of earshot.

From The New American: A Novel. Copyright © 2020 by Micheline Aharonian Marcom. Reprinted by permission of Simon & Schuster, Inc.

Behind the Mic: On True Story by Kate Reed Petty, Read by Kirsten Sieh, Alexander Cendese, and Cassandra Campbell 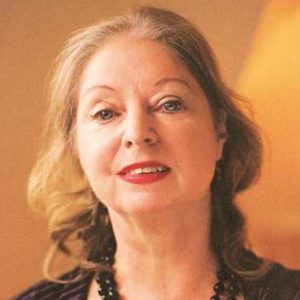