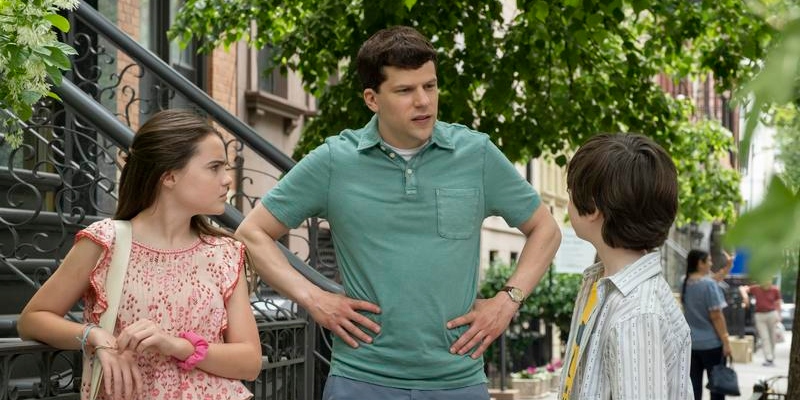 There’s a scene in the excellent new adaptation of Taffy Brodesser-Akner’s 2019 novel Fleishman Is in Trouble that feels like a perfect moment of metonymy for parenthood. Toby Fleishman (Jesse Eisenberg) has brought his two children, Solly and Hannah (the terrifyingly excellent Maxim Swinton and Meara Mahoney-Gross), to the American Museum of Natural History to see an exhibit on Vantablack—which Libby, Toby’s friend and the show’s narrator (Lizzy Caplan) previously informed us was “the closest you can get to a physical manifestation of the void.”

The episode opens with Toby outside the same exhibit, alone, but he leaves—with a slightly panicked Eisenbergian twitch of the head—before stepping into the exhibit’s main hall(/void). Later, Toby returns with his kids, all three of them quietly processing the trauma of the past few weeks. This time, they make it into the hall, but only just. “I need to leave. We have to leave,” Solly says, and sprints out, followed by Toby and Hannah. When they reconvene post-void, on a bench outside (to a slowed down cover of “Dancing on My Own”), Toby puts his arms around them, and the gesture seems freighted with the awareness of itself as a gesture—it’s not much, but really, what can he do but be there in the horrible moment?

The eight-episode limited series (from FX and Hulu, premiering on November 17th) is studded with this sort of howl-inducing scene. It’s at its best when documenting the small tragedies and triumphs of parenting; of ceding parts of yourself, large and small, to the small people you’ve made and the larger ones you’ve chosen. Eisenberg’s Toby is a father I haven’t often seen on-screen. The actor carries the associations and mannerisms of his earlier roles (aided by his Paul Rudd-ian resistance to visible aging—in the flashback scenes, only he is a convincing early-20-something), but in his scenes with the children, the awkwardness plays less like standard dad-ish incompetence and more like genuine parental effort that felt deeply familiar to me.

Eisenberg’s Toby is as frustrating as the Toby of the novel, but he brings an immediacy to the character’s struggles that makes it hard for me to discount him as simply a “well-meaning egoist” (as Katy Waldman described him in her review of the book). It’s a beautiful performance all the way through, though I found his rage with his wife, his desire for the validation and intimacy of casual sex, somewhat less compelling than his moments of parental muddling, perhaps because Eisenberg’s lust is played as afterthought rather than ambient.

The show is at its best when documenting the small tragedies and triumphs parenting; of ceding parts of yourself, large and small, to the small people you’ve made and the larger ones you’ve chosen.

The show, like the novel, centers around the events following the inexplicable disappearance of Toby’s ex-wife, Rachel, the high-powered theatrical agent of a Lin Manuel Miranda proxy; from Toby’s perspective, Rachel is too hungry for power and money and not enough for the comforts of family life. Behind the mystery (and the resulting childcare and work-related logistical nightmares) is the din of Toby’s app-based sex life. The show deftly navigates the eternal struggle of showing phones on-screen, popping rectangular app-prospects throughout Toby’s single-sad-dad apartment. (Less successful is the disorienting whole-screen spins it occasionally employs, representing perspective shifts, or the upheaval of established lives, or both—but which mostly feel like a headache-inducing gimmick.)

Claire Danes give a beautiful, wrenching performance as Rachel, the absent wife (though happily much less absent than in the book). She is brittle and striving and off-puttingly ambitious, and, in Danes’s hands, her trauma and tenderness and deep parental insecurities are given real weight and depth. The postpartum depression that’s exacerbated by the traumatic circumstances of her daughter’s birth gives us some of Danes’s finest scenes, and some of the show’s most aching. “Where’d they learn to play with their babies like that?” Rachel asks Toby when she sees a group of women from her prenatal yoga class in the park. “They don’t teach us that in the class.”

The Rachel of the book is presented to readers strictly from Toby’s perspective (via Libby’s admittedly biased narration), until a late-in-the-game perspective shift. While this remains technically true in the show, our view of Rachel is necessarily more balanced, by virtue of the medium (even the most MFA praiseworthy showing-not-telling is still showing). Taffy Brodesser-Akner is credited as the writer for all but one of the episodes, and as a result, the show feels more like a true expansion of the book’s universe than anything. I got the sense that Brodesser-Akner’s development of these characters was freed by the format shift—and that she was able to build more of the world on her own terms. There was not a Leftovers-like transcendence of source material but a deepening of each character’s inner world.

In most cases, this was to the great benefit of the project. I loved seeing more Rachel, more Solly, more Hannah. I loved seeing more Libby, too, though I found that the more of her story we saw, the less convinced I was of her utility as narrator. The Libby of the novel isn’t at all impartial, but the Libby of the series felt, at times, too full of her own raw hurt to convincingly cede the narrative spotlight, even in the early episodes.

This is, I think, to the credit of Lizzy Caplan’s performance. Her Libby is funny and prickly and dissatisfied in a specific way—she is no one’s proxy. As in the novel, we learn about the slow demise of her career, languishing as a capable writer at a men’s magazine (Brodesser-Akner herself worked at GQ before moving to the New York Times), forever overshadowed by male staffers, including Christian Slater as a delightfully horrendous superstar misogynist. Her interest in the drama of Toby’s life feels, at points, journalistic, voyeuristic, born of schadenfreude for a friend whose life is more glamorous (the upper-echelon class distinctions are as finely drawn here as in the book), or of sympathy for a friend, or of simple boredom with life as a stay-at-home-mother in the suburbs.

Certainly, Caplan feels slighted when Toby and the third point of the college trio, Seth (the ever-delightful Adam Brody), exclude her from their extremely male revelry (or whatever the depressive, middle-aged version of revelry is). But the unraveling of Libby as the ostensibly journalistic voice plays better in the novel, where the reveal can spin out more slowly. On screen, she can’t conceal her personhood.

On the whole, Brodesser-Akner knows just what to do with her additional space. The scenes are taut, the pacing is perfect, and in some ways, I felt that the story was even better suited to the screen than the page. Maybe there’s just something about those quiet moments of parental love and despair that play better when you can see the fierceness and fear of the embrace.

Jessie Gaynor is a senior editor at Lit Hub whose writing has appeared in McSweeney's, The New Yorker, The Paris Review, and elsewhere. Her debut novel, The Glow will be published in June 2023. You can preorder it here.
https://www.jessiegaynor.com/

Moral Panics Never Go Out of Style: On the Corrosive Effects of the Culture Wars 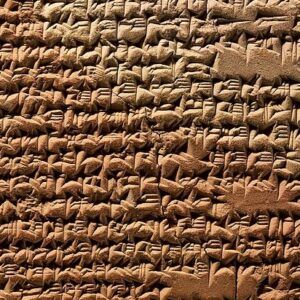 Measurement was a crucial organizing principle in ancient Egypt, but metrology itself does not begin with nilometers. To understand...
© LitHub
Back to top