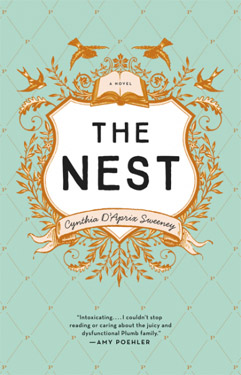 The following is from Cynthia D'Aprix Sweeney's novel, The Nest, and is also one of the 40 pre-publication excerpts presented in Buzz Books 2016: Spring/Summer. D’Aprix Sweeney lives in Los Angeles with her husband and children. She has an MFA from Bennington.

As the rest of the guests wandered the deck of the beach club under an early-evening mid-summer sky, taking pinched, appraising sips of their cocktails to gauge if the bartenders were using the top-shelf stuff and balancing tiny crab cakes on paper napkins while saying appropriate things about how they’d really lucked out with the weather because the humidity would be back tomorrow, or murmuring inappropriate things about the bride’s too-tight satin dress, wondering if the spilling cleavage was due to bad tailoring or poor taste (a look as their own daughters might say) or an unexpected weight gain, winking and making tired jokes about exchanging toasters for diapers, Leo Plumb left his cousin’s wedding with one of the waitresses.

Leo had been avoiding his wife Victoria who was barely speaking to him and his sister Beatrice who wouldn’t stop speaking to him—rambling on and on about getting together for Thanksgiving. Thanksgiving. In July. Leo hadn’t spent a holiday with his family in probably twenty years, since the mid 90s if he was remembering correctly, he wasn’t in the mood to start now.

Cranked and on the hunt for the rumored empty outdoor bar, Leo first spotted Matilda Rodriguez carrying a tray of champagne. She moved through the crowd with a lambent glow—partly because the setting sun was bathing the eastern end of Long Island an indecent pink, partly because of the truly excellent cocaine wreaking havoc with Leo’s synapses. The bubbles rising and falling on Matilda’s tray felt like an ecstatic summons, an invitation meant just for him. Her sturdy black hair was pulled away from the wide planes of her face into a serviceable knot; she was all inky eyes and full red lips. Leo watched the elegant weave of her hips as she threaded her way through the wedding guests, the now-empty tray held high above her head like a torch. He grabbed a martini from a passing waiter and followed her through the swinging stainless-steel doors into the kitchen.

It would seem to Matilda (nineteen, aspiring singer, diffident waitress) that one minute she’d been passing champagne to seventy-five members of the extended Plumb family and their closest friends and the next she was barreling toward the Long Island Sound in Leo’s brand new Porsche, her hand down the front of his too-tight linen trousers, the fat of her thumb inexpertly working the underside of his penis.

Matilda had resisted when Leo first pulled her into a side pantry, his fingers cuffing her wrists while he pelted her with questions: Who are you? Where did you come from? What else do you do? Are you a model? An actress? Do you know how pretty you are?

Matilda knew what Leo wanted, she was propositioned at these events all the time, but usually by much younger men—or ludicrously older men, ancient—with their arsenal of lame pick-up lines and vaguely bigoted attempts at flattery. (She was constantly being called J. Lo in spite of looking nothing like her; she was Mexican, not Puerto Rican). Even in this moneyed crowd, Leo was unreasonably handsome, a word she was quite certain she’d never employed for someone whose attention she was almost enjoying. She might think hot, she might think cute or maybe even gorgeous, but handsome? The boys she knew hadn’t grown into handsome yet. Matilda found herself staring up at Leo’s face trying to determine which variables equaled handsome. Like her, he had dark eyes, dark hair, a strong brow. But where his features were angular and sharp, hers were round and soft. On television he would play someone distinguished—a surgeon maybe, and she would be the terminally ill patient begging for a cure.

Through the pantry door she could hear the band—orchestra, really, there had to be at least sixteen pieces—playing the usual wedding fare. Leo grabbed her hands and pulled her into a little two-step. He sang close to her ear, above the beat, his voice pleasantly lively and rich. “Someday, when I’m awfully low, when the world is cold, I will dah-dah-dum just thinking of you, and the way you look tonight.”

Matilda shook her head and laughed a little, pulled away. His attention was unnerving, but it also made something deep within her thrum. And fending off Leo in the pantry was marginally more interesting than wrapping asparagus with prosciutto in the kitchen, which was what she was supposed to be doing. When she shyly told him she wanted to be a singer, he immediately offered that he had friends at Columbia Records, friends who were always keen to discover new talent. He moved in again and if she was alarmed when he stumbled a little and seemed to need to keep a palm on the wall to maintain balance, her worry evaporated when he asked if she had a demo, something of hers they could listen to in his car.

“Because if I like it,” Leo said, taking Matilda’s long, delicate fingers in his, “I’d want to get on it right away. Help you get it to the right people.”

As Leo deftly maneuvered Matilda past the parking valet, she glanced back at the kitchen door. Her cousin Fernando had gotten her this job, and he would be furious if he found out she’d just up and left. But Leo had said Columbia Records. He’d said, always looking for new talent. When did she ever get opportunities like this? She would only be gone for a little bit, just long enough to make a good impression.

“Mariah was discovered by Tommy Mottola when she was a waitress,” she said, half-joking, half trying to justify her behavior.

“Is that right?” Leo hustled her toward his car, scanning the windows of the beach club above the parking lot. It was possible that Victoria could see him from the side terrace where everyone was gathering and quite probable she’d already noticed his absence and was stalking the grounds looking for him. Furious.

Matilda stopped at the car door and slipped off her black-canvas work shoes. She took a pair of silvery stilettos from a worn plastic shopping bag.

“You really don’t need to change shoes for this,” Leo said, resisting the urge to put his hands around her tiny waist right then and there in plain sight of everyone.

“But we’re getting a drink, right?” Matilda said.

Had Leo said something about a drink? A drink was not possible. Everyone in his tiny hometown knew him, his family, his mother, his wife. He finished off his martini and threw the empty glass into the bushes. “If the lady wants a drink, we’ll find the lady a drink,” Leo said.

“I hate wearing flats.” Matilda stepped into the sandals and gently slid one slender metallic strap over the swell of her left heel, then her right. She straightened, immediately eye level with Leo and tugged her fitted white blouse a little lower. “They make me feel flat all over.” Leo practically pushed Matilda into the front seat, out of sight, safely behind the tinted glass.

Sitting in the front seat of the car, Matilda was stunned to hear her tinny, nasal voice coming through the car’s obscenely high-quality speakers. She sounded so different on her sister’s ancient Dell. So much better.

As Leo listened, he tapped his hand against the steering wheel. His wedding ring glinted in the car’s interior light. Married was most assuredly against Matilda’s rules. She could see Leo trying to pay attention, summon an interest in her voice, search for something flattering to say.

“I have better recordings. I must have downloaded the wrong version,” Matilda said. She could feel her ears turn hot with shame. Leo was staring out the window. “I better get back.” She reached for the door handle.

“Don’t,” Leo said, putting his hand on her leg. She resisted the impulse to pull away and sat up a little straighter, her mind racing. What did she have to sustain his attention? She hated waitressing, but Fernando was going to kill her for disappearing during dinner service. Leo was boldly staring at her chest. She looked down at her lap and spotted a small stain on her black trousers. She scraped at the spot of balsamic vinaigrette with a fingernail; she’d mixed gallons of it. Everyone inside was probably plating the mesclun and grilled shrimp now, squeezing the dressing from bottles around the edge of each plate into a pattern that was supposed to approximate waves, the kind a child would draw to indicate an ocean. “I’d like to see the ocean,” she said, quietly.

And then, so slowly she wasn’t sure what was happening at first, Leo took her hand in his (for a foolish moment she thought he was going to kiss it, like a character in one of her mother’s Telenovela shows) and placed it on his lap. And she would always remember this part, how he never stopped looking at her. He didn’t close his eyes or lean his head back or lunge in for a clumsy kiss or fumble with the buttons on her blouse, he looked hard and long into her eyes. He saw her.

She could feel him respond beneath her hand and it was thrilling. As Leo held her gaze, she applied a little pressure with her fingers and the balance of power in the car abruptly shifted in her favor. “I thought we were going to see the ocean,” she said, wanting to get out of sight of the kitchen. He grinned and put the car into reverse. She had his pants unzipped before his seat belt was fully fastened.

You couldn’t blame Leo for the rapidity of his climax. His wife had cut him off weeks ago, after she caught him fondling a babysitter in the back corridor of a friend’s summer house. Driving toward the water, Leo hoped the combination of booze, cocaine, and Wellbutrin would stall his response, but when Matilda’s hand moved with intent, he knew everything was happening too fast. He closed his eyes for a second—just a second—to collect himself, to stop the intoxicating image of her hand, the bright blue fingernails, moving up and down. Leo never even saw the SUV barreling down Ocean Avenue, coming from the right, perpendicular to their car. Didn’t realize until it was too late that the screech he heard wasn’t Matilda’s voice coming from the sound system, but something else entirely.

Neither of them even had time to scream.

From THE NEST. Used with permission of Ecco. Copyright © 2016 by Cynthia D’Aprix Sweeney. 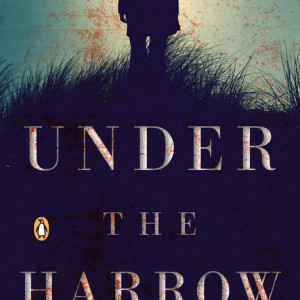 Under the Harrow A woman is missing in the East Riding. She vanished from Hedon, near the village where we grew up. When Rachel learns...
© LitHub
Back to top