The Most Radical Thing
You Can Do

From the foreword to The Most Radical Thing You Can Do

The subtitle of Jón Kalman Stefánsson’s novel Heaven and Hell is We Are Nearly Darkness. These days we are feeling that way too, as if caught in a riptide taking us farther and farther out to sea as night falls. Darkness surrounds us. We ingest it, flail at it, try to push it away as we navigate an out-of-control pandemic, a perverted and structurally corrupt presidency, and a global climate emergency that, if unchecked, will destroy us all.

These fine essays, written over the last twenty years, touch on all-too-familiar themes of racism, exclusion, and ecosystem abuse and destruction. Our country has genocide, slavery, and land theft in its otherwise virtuous veins, and now in the tarnished unfolding of the Anthropocene, we are living in an age of consequences. It has become clear that we have confused “having” with “being.”

Few noticed that a third of the planet had been desertifying, that as more and more land degraded, rainfall could no longer infiltrate the soil. And who was keeping track of the carbon dioxide (CO2) that had risen from 300 parts per million (ppm) to 417 ppm, a level deemed risky for the continued survival of living beings? Too few had grasped that human callowness and carelessness would force temperatures up and up until rivers dried, seas rose, forests and grasslands burned, and crops failed.

Twenty years ago, we could not have imagined a global pandemic would be intentionally allowed to get out of hand in our own country, that our president and his obsequious followers would behave so negligently as to be the equivalent of a death squad, exchanging the lives of citizens for economic and political gain. Who could have imagined that in a last grasp at reelection, Trump’s private militia would be plying the streets of our cities, reminding me of Francisco Franco’s limpieza social—“a cleaning of society”—and finally showing us that this would-be dictator had moved up a notch to become a dictator in the making, though in this too he will probably fail.

Twenty years ago, we could not have imagined that we would become totally isolated from the rest of the world, unable to cross any border, hated and unsavory pariahs welcome in no other country.

Nights, we go outside to look for the comet Neowise, perhaps because it appears to be a fixed point of light, an emblem of hope, and for a moment we take a deep breath . . . ahhhh . . . though we know its seeming motionlessness is illusory. Hope can become a fixation, a destination toward which we travel. Same too with feelings of hopelessness when we dive into inward darkness, lose our way, and refuse to come out. Yet those who came thousands of years ago knew that the individual and the cosmos are connected, and from the beginning are nothing but one.

No one asked us if this is how we wanted our world to be.

There’s a hurricane watch as I write these words, reminding me that groundlessness is the name of the game, and as things shift and whirl and glass windows bow inward, we can still find a spinal alignment with things as they are. The track between hope and hopelessness is whatever is under our feet at the moment.

We are smaller than we think we are. The Inuit hunter I traveled with for years said, “You have to be modest in front of the weather.” He never took his eyes off the whole picture, the entire context of nature. Whenever we do, we quickly become the endangered species we forgot to save.

We long for the “polis,” for a societal hub designed by and for people instead of by and for carmakers who remade towns and cities only for the automobile. We long to interact, cook, laugh, drink, walk, swim, read, work together; to collaborate, grow food, manage land and animals with a humble reverence, and live with a sense of fun and creativity. We long for a civil society, for our basic needs to be attended, for robust education—however it plays out, even in this pandemic: no excuses. We have all the tools and know-how to solve all human problems and make things happen. We no longer have to be victims of circumstances.

In these essays, racism is touched upon by Glenis Redmond and her memories of the Gullah people, their language and lifeways on the southeast coast of our country. Robin Wall Kimmerer refers to the deep cultural and physical losses of Indian removals, when her own people, the Potawatomi, were forced from Wisconsin to Kansas, then to Oklahoma, leaving behind language, traditional ecological knowledge, and an ability to survive. “Some years a feast, most years a famine,” she writes. Barbara Kingsolver asks who and what is the enemy, and what creates change? She writes that we have “a careless way of sauntering across the earth and breaking open its treasures, a terrible dependency on sucking out the world’s best juices for ourselves.”

Our prescribed inalienable rights have been converted from the pursuit of happiness to the pursuit of profit, the extraction of oil, gas, gold, copper, nickel, tantalum, and cobalt, as well as the making of urban sprawl, the ghettoization of cities, and the industrialization of growing food with plows, chemicals, and cheap undervalued human labor. We submit Earth to machine violence. We submit humans to unequal treatment. Our caste systems are built into banking, city planning, and unsound agricultural policies. We are the serial destroyers of the whole.

No one asked us if this is how we wanted our world to be.

Wendell Berry writes: “We are destroying our country—I mean our country itself, our land. . . This destruction is not necessary. It is not inevitable, except that by our submissiveness we make it so.” We can make changes. We can just go out and do it.

A world comes apart; a whole season gives way and crumbles. Time during COVID-19 folds in on itself, a friend said. We avidly reread Camus’s brilliant novel La Peste (The Plague), written in a village where Huguenot residents hid Jews during World War II and sent them out of harm’s way to Switzerland. La Peste is not only a chronicle of bubonic plague but also an allegorical attack on the moral cowardice of collaborators during the Nazi occupation of France. We must take heed.

We need to make our minds bigger. Not vanish in darkness.

We reach for Dante and read of his adventures as he is guided into hell. On the way, Dante noticed a “soothsayer” with his head on backward. Was the fortuneteller looking away in denial, or was he like a Native American contrary dancer trying to stir things up and cut through habitual behavior? Sometime in my 23 years of travels by dogsled in Greenland, an Inuit politician said to me: “We are walking backward into the future. We have to turn around.”

Tonight, someone pulls on the moon’s slim handle, and by morning a dome of heat drops down and will not give way. The perturbation of Earth’s systems bears human fingerprints. We have been crawling all over and, like lice, biting her fragile skin.

All summer the Siberian taiga and tundra fires have smoldered. Fire and ice. Heaven and hell. We are almost darkness. At the 2015 Paris climate conference, AKU-MATU, an Iñupiaq poet from Alaska, sang out: “I am an ancestor of the future. Why is it so hot here?”

We need to make our minds bigger. Not vanish in darkness. Recently, astronomers discovered the “South Pole Wall” that stretches 1.4 billion light-years across the southernmost part of the sky, described by French scientist Daniel Pomarède as “the cosmic web, enormous strands of hydrogen gas in which galaxies are strung like pearls.” We have to wear those vast pearls around our necks, and inside our minds. We have to have the guts to stop pimping the planet.

Restoration ecologists, soil doctors, regenerative agriculturalists, pastoralists, farmers, and ranchers around the world have been doing just that. They are calling attention to their urgent work of large-scale regeneration of the world’s grasslands and of the livelihoods of its inhabitants. Perennial grasses sequester as much or more carbon than forests, holding it in their root systems belowground, so that even if there is a fire, no carbon is released. The EverGreening Alliance calls it “greening up to cool down,” and together with Savory Global Hubs, they aim to capture from the atmosphere and restore to the land twenty billion tons of CO2 annually by the year 2050.

Sentience and sunderance. Those two words have been on my mind. To know, to lose, to learn anew, to lose it all, to begin again. We are by turns euphoric and wistful, furious and enervated, despairing, suicidal, and dare I say the word, hopeful? What has been lacking is the political and societal will. Not the way. Mid-pandemic, we rejoiced at the sight of animals reentering our towns and fields as if to say that we humans have been in the way all this time.

When Barbara Kingsolver writes about a lost boy found in a cave, embraced and held safely by a bear, we want to believe it. We want to feel that bear hug. Perhaps the jolt of death all around will wake us up, provoke a new all-inclusive sensibility. The Way has always been right here, under our feet, and with self-discipline and new eyes, we might be lucky enough to experience what Wendell Berry called “coming into the peace of wild things.” 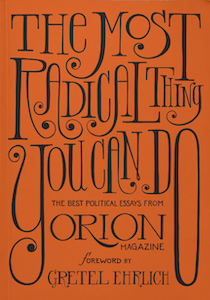 anthropoceneclimate changeglobal warmingGretel EhrlichnatureOrion Magazinethe arcticThe Most Radical Thing You Can Do
Share:

Gretel Ehrlich is the author of This Cold Heaven, The Future of Ice, Heart Mountain, Facing the Wave, and The Solace of Open Spaces, among other works of nonfiction, fiction, and poetry. Ehrlich studied at Bennington College and UCLA film school. She lives in Wyoming. 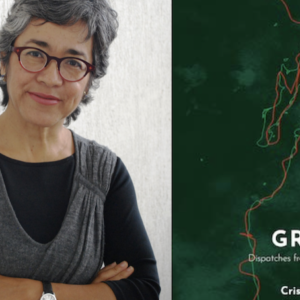