William Giraldi on New Jersey and Writing A Memoir

After an 1879 ride on the Camden ferry—“What exhilaration, change, people, business, by day. What soothing, silent, wondrous hours, at night”—Walt Whitman paused before going home. “I heard the echoing calls of the railroad men in the West Jersey depot yard, shifting and switching trains, engines, &c.; amid the general silence otherways, and something in the acoustic quality of the air, musical, emotional effects, never thought of before. I linger’d long and long, listening to them.” Whitman spent the last 20 years of his life in Camden, and often praised the city in his prose. He completed the 1876 edition of Leaves of Grass there. The city still celebrates his memory. He remains the prototypical New Jersey writer: often pulled elsewhere, but tethered to this complex state.

George Plimpton said it was New Jersey’s colorful collisions—“The mob, great prizefighters, the prisons, the world of Far Hills, the gamblers, the shore, the corridor between Philadelphia and New York”—that helps create great literature. New Jerseyans love to argue, but in the literary sense, our state has three main demarcations: the Newark found in the fiction of Philip Roth and the poetry of Amiri Baraka, the south Jersey of Stephen Dunn and Paul Lisicky, and the enigmatic central slice of the state—authentically captured by Joyce Carol Oates and William Giraldi.

I grew up a half-hour from Giraldi’s hometown of Manville—yes, that is a real place—and taught at a nearby public high school in Bridgewater for a decade. Giraldi’s new book, The Hero’s Body, is a memoir about his father, bodybuilding, and the male myths of the Garden State. Although it is his first book of non-fiction, attuned readers will find echoes of the sharp cadence of his breakneck novel, Hold the Dark, Giraldi’s thriller set in Alaska.

Hold the Dark is being made into a film by Jeremy Saulnier, director of the excellent and frenetic Green Room. Giraldi told me that Macon Blair, the film’s screenwriter, involved him in the creation of the script, though he appreciates the marked differences between the forms. “Everything in a film must be audio and/or visual, and so much of Hold the Dark, so much of any novel, really, happens within. That’s the novel’s great strength, what it has over film, what it has over any other art: boundless interiority.”

Giraldi is thrilled that Forest Whitaker has been cast as Russell Core, a wolf expert contacted by a woman whose son has been abducted by a pack that has ventured into town. He said Whitaker “has the exact quality of silent gravitas needed to play Core, the precise grappling of spirit, the way he acts with silence.”

Since Hold the Dark is so very much a novel—an interior whirlwind that bursts outward, that embraces the unknown yet whose plot barrels forward—I was curious about his transition to memoir. “It was a handicap,” he said, “not to be able to invent what would have been effective in terms of plot and character, and yet it was freeing that I didn’t have the unbridled liberty to invent. But the real challenge with this book was identical to the challenge I faced with my two novels, which was the language—how to forge and hone the right language, how to find the right words to attach to the three events of my life covered in this book: the teenage bodybuilding, my father’s death, and the birth of my sons. The other stuff—plot, characterization, dialogue, structure—are simple compared to summoning a language both potent and appropriate to the material. Style and substance are not, cannot, be disentangled.”

The language of The Hero’s Body captures the adrenaline-drenched world of training and lifting without fetishizing that sphere. What keeps Giraldi grounded is his recognition of the fragility of our bodies, particularly when they are pushed to their limits. In the memoir’s first scene, he is 15, a sophomore in high school. He’s been sick for a few weeks. He is being raised by his father, a carpenter—his mother left the family when he was 10—and they have no medical coverage.

The spinal tap threatens to break him, but he survives the strain of the procedure. In a metaphor appropriate for the book, it takes his father seven years to pay the bill for the procedure and his stay in the hospital: “He kept a list of his payments in a black-and-white composition notebook, and, a decade later, after his violent death in a motorcycle crash, I found the notebook in a blue bin and wept with it there on my lap.”

Giraldi loves his father with a passion that lifts the page. The Hero’s Body is an elegy for him, no matter where the narrative goes along the way. Giraldi goes from 125 pounds, “spattered with acne, both earlobes aglitter with silver studs and my hairdo a mullet like a lemur’s tail,” to a competitive bodybuilder whose life becomes an obsession with redefining one’s body and soul. He pivots from the force of training to the inherent parody of the pursuit, as when he reproduces a long conversation the guys from his gym have about Giraldi’s contest diet.

They want him to work on his conditioning, and quip “he can read those weirdo books of his on the bike, those little poems or whatever the hell they are.” Although he places second in a contest, he is drawn more and more to literature: essays by Dorothy Parker, and especially the fiction of Raymond Carver, whose “world is a spiritual tundra, an alcoholic wasteland in which the American Dream means disappointment and malaise: not because it has died, but because it never was born. Communion, it if comes at all, comes from minor human interaction. Forget about grace; grace means a feeble paycheck. If you’re lucky, the electricity won’t be turned off.”

The Hero’s Body is easily the most literary book ever written about bodybuilding. Giraldi peppers references to Gerard Manley Hopkins, whom he calls Father Hopkins (Giraldi leaves behind the Catholicism of his youth, but can’t quite shake the sense of guilt). Giraldi has been a sharp critic over the years, covering everything from Barry Hannah to The Exorcist. In an age when fiction writers tend to avoid criticism, Giraldi embraces the form. “Clive James has that line to effect that if you can’t criticize yourself then you’re not a writer, and so the criticism of books and ideas aids me in laying out my own ars poetica, my program for what I’m doing in my own imaginative work.” Unlike many fiction writers, he actually finds essays to be freeing: “Fiction is very, very hard for me, and autobiography isn’t much easier, but the critical voice, or at least the critical register in which I myself write, comes without effort. The tenor of my criticism is the tenor I carry around in my head all day long, whereas a novel requires a tenor to match the characters and circumstances.”

Yet The Hero’s Body is not an academic book. At its soul, it is a New Jersey book about a New Jersey father. Manville is “pure Jersey,” a town full of “plumbers and masons, pickup trucks and motorcycles, bars, liquor stores, and football fields, diners, churches, and auto repair shops, and a notorious, all-nude strip club once called Frank’s Chicken House.” Manville was a “blue-collar zip code,” but Giraldi’s clan especially considered masculinity “not just a way of being but a sacral creed.”

Giraldi has lived in Boston for the past 20 years, but told me that “no one ever fully exorcises the Jersey from himself”—note the Catholic verb there. He sees the state as a place of strength: “no matter where else you go in the nation, or where else you live, no place is as tough and brutal as Jersey. The shopping malls alone are enough to defeat an Olympian, never mind the highways.” I know what he means when he says the state’s “citizens are constantly rubbing up against one another, clashing, elbowing for room, but because of its inferiority complex underneath New York.” He wanted to write The Hero’s Body as “a book that represents Jersey in all its maniacal grit and thew, its many sins and contradictions.”

Although it’s a book focused on toughness, Giraldi’s memoir ends with a consideration of another father—himself. Since he finished the book, his third son, Caleb was born. I asked him if he wanted to say anything to the concept of male lineage and the idea of father and sons in the context of his memoir. “Having three sons, one naturally thinks of that, the concept of male lineage. I’m just trying not to force the pressures of a lineage onto them. Having grown up with those pressures I can testify that they aren’t pleasant. That’s why I didn’t make Ethan [his eldest son] the fifth William Giraldi. Enough of the lineage, the superannuated ethos of manhood. I want them to understand that there are myriad ways to be a man. If they want to build muscles and race motorcycles, I’ll be there to help them (although they would mount motorcycles over my wife’s dead body).”

He ended with a sentiment that permeates The Hero’s Body: “What I hope to teach them is that masculinity is as much about spirit and mind as about body. I want them to see a kind of masculinity in Father Hopkins, say, as much as they see it in Phil Heath, the reigning Mr. Olympia. What Father Hopkins did in verse Phil Heath has done with his body. My boys are growing up in a nation hostile to the notion of masculinity, or to certain aggressive notions of manliness, let’s say, and overt masculinity is no longer tolerated in most quarters of society. I’m of two minds about that. I think men should be men—you know what I mean—without having to feel apologetic all the time. But I don’t think that boys should be saddled with the Sly Stallone and Hulk Hogan conception of manhood. If they gravitate to that on their own, fine. But I won’t force it upon them as it was forced upon me. Let them see that their salvation lies in literature, art, music, spirit, mind, kindness, fellowship. If they want built bodies and crave the thrill of speed, all right. But they should at least have the option to choose.” 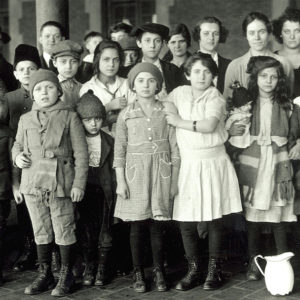 I’ve lived in the United States for over 20 years, but the appalling dichotomy between Americans and immigrants has never...
© LitHub
Back to top