Craig Morgan Teicher on the Rise of a Great Poet

The voluminous critical conversation about Sylvia Plath has tended to orbit a few topics: her suicide, of course, and the ways mental illness and madness perhaps predicted her death and marked her poetry; the blazing ferocity of her posthumous masterpiece Ariel; the co-opting of images and metaphors (from the Holocaust, for instance) in those late poems; and the overall relationship of her biography to her supposedly confessional poems, especially when it comes to Ted Hughes, his affair with Assia Wevill, and his curation of Plath’s legacy after her death. These are all compelling topics, and they’ve had a deep and lasting effect on how we read Plath’s poetry. But I prefer to think about Plath’s amazing poems and the creative surges that enabled her to write them.

In Plath we have a unique example of rapid, surging development of a poet’s art. In only seven years—from 1956, when the first poems in her Collected Poems were written, to 1963, the year of her death—Plath went from being an obviously talented and excruciatingly ambitious (as her journals attest) apprentice poet with lots of technique and intensity but few real subjects on which to train those powers, to the author of unprecedented works of genius. In Plath’s first book, The Colossus and Other Poems, the only book of poetry she published in her lifetime, we have an unusual opportunity to pinpoint the moments when her art surges forward in particular poems—we can actually watch her grow as an artist, see a little bit how the magic trick was done, and perhaps learn from it. Plath’s earlier poems have a lot to teach about how poets expand their capacities, how they “find” a voice by listening closely to their own minds, and how genius can be, if not made, then at least willfully courted.

Plath was a poet who developed by breakthrough. She worked at poetry as a craftsperson, a wildly driven one; she sat down every day and made herself write, and churned the products of her writing until they became fulfilled poems. In his introduction to her Collected Poems, Hughes writes, “To my knowledge, she never scrapped any of her poetic efforts. With one or two exceptions, she brought every piece she worked on to some final form acceptable to her, rejecting at most the odd verse, or a false head or a false tail. Her attitude to her verse was artisan-like: if she couldn’t get a table out of the material, she was quite happy to get a chair, or even a toy. The end product for her was not so much a successful poem, as something that had temporarily exhausted her ingenuity.” Hughes’s characterization of Plath as an artisan feels accurate: even in her minor poems, there’s a sense of rightness that pops up at times when the language seems to click into place.

There are no rough edges in Plath’s early work: all of it feels worked over. The poems feel distinctly like aesthetic objects, like word sculptures designed to provoke particular responses in their readers. Whatever Plath encounters in her early poems—a landscape, a creature, a phenomenon of weather, a person out of a mythical past—she renders with exhaustive intensity and precise laborious description. Few poems go by without the inclusion of obscure words—“skinflint trees”; “faces / Lucent as porcelain”; “A rise in the landscape, hummock or hogback.” Of course we marvel at the ease with which she deploys her considerable vocabulary— and the poems are, always, beautiful—but these words, and so many of the flowery descriptions, seem to be there, in part, to impress, or for the fun of using a new tool she has discovered in her toolbox. Plath is testing herself, but the early poems mostly show a virtuosity of technique rather than of emotion.

It would take her years—though not that many years—to find subjects suitable to her voice and craft, subjects that would push and then exceed the frames of her technique.

Her hard work honed her sentences and lines—the technical aspects of poetry that actually can be practiced and taught—and kept the floodgates open in case something important was ready to flow through. She came to poetry with an innate sense of the music of words and sentences, and her earliest poems are already taut with the intensity of her personality and her mature work. “With such blight wrought on our bankrupt estate, / What ceremony of words can patch the havoc?” concludes “Conversation Among the Ruins,” the sonnet that opens the Collected; it’s a meditation on a decayed place as a representation of a decaying person, as bleak and unforgiving as she would ever be. “Blight” and “wrought” clang against each other like little swords, her ears attuned. And she had studied up on strict form, still a prerequisite for poetry in the 1950s, and could already deploy rhyme and meter with seeming ease. But it would take her years—though not that many years—to find subjects suitable to her voice and craft, subjects that would push and then exceed the frames of her technique.

During her lifetime, Plath published two literary works for adults: The Colossus and Other Poems, and her novel The Bell Jar (under the pseudonym Victoria Lucas), and she was in the advanced stages of preparing the groundbreaking Ariel when she died. She had two major developmental surges in poetry, one on display in each of her major poetry books, The Colossus and Ariel. The chronologically organized Collected Poems shows her searching and working toward those breakthroughs.

Many young poets today, who submit their manuscripts to annual contests year after disheartening year, will relate to the story of the publication of The Colossus: Plath submitted an ever-changing sheaf of poems to first-book contests (“three months till the Yales open,” she wrote in her journal, psyching herself up to submit to the Yale Younger Poets Prize) and publishers’ slush piles during the first years of her marriage to Hughes in England and the United States, saw it rejected, swapped old poems out and new ones in, and sent it out again. Meanwhile, Hughes’s debut, Hawk in the Rain, won one of those contests, and he was off and running by the time they came to the States. And Plath was excited for him, writing in her journal, “I knew there would be something like this to welcome us to New York! We will publish a book-[s]helf of books between us before we perish! And a batch of brilliant healthy children!” Alas, it would be a narrow shelf in her case, though a deep one. It was during these frustrating and exciting years that something extraordinary began to happen in her work, making the published version of The Colossus an uneven and unusually promising book.

Plath and Hughes left England in 1957 and took up residence in Northampton, Massachusetts, where Plath taught at Smith and the couple spent fruitful time at the artist colony Yaddo. “Of course Henry Holt rejected my book last night with the most equivocal of letters. I wept, simply because I want to get rid of the book, mummify it in print so that everything I want to write now doesn’t get sucked in its maw. Ted suggested I write a new book. All right, I shall,” she writes in her Yaddo journal in 1959. Then, with this in mind, at Yaddo, the Colossus breakthrough began: she wrote a clutch of new poems that would open the door. These included “The Colossus,” “The Manor Garden,” and “Poem for a Birthday,” poems she identified as different from her others. At this point, her first manuscript was still making the rounds. These new poems excited her so much she actually thought they were the beginning of a new book that would lay to rest the old manuscript that, she wrote, “feels dead to me.” But, “If I were accepted by a publisher,” she wrote in her journal before The Colossus was taken, “I would feel a need to throw all my new poems in to bolster the book.” That is exactly what she did, and why we have the chance to see a new, wilder Plath emerging from the more careful and mannered one. 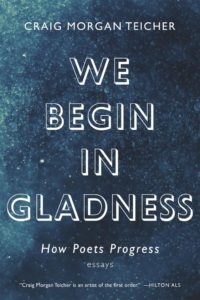 Excerpted from “Sylvia Plath’s Surges” from We Begin in Gladness. Copyright © 2018 by Craig Morgan Teicher. Reproduced with the permission of Graywolf Press, Minneapolis, Minnesota, www.graywolfpress.org

Craig Morgan Teicher is an acclaimed poet and critic. He is the author of We Begin in Gladness: How Poets Progress (forthcoming from Graywolf Press), and three books of poetry, including The Trembling Answers, winner of the Lenore Marshall Poetry Prize, and he regularly writes reviews for Los Angeles Times, NPR, and the New York Times Book Review. He lives in New Jersey. 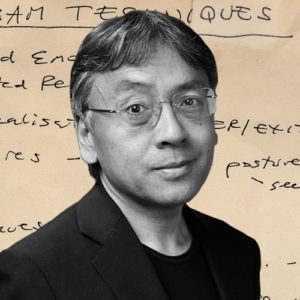 This week, I came across a piece from the Ransom Center magazine highlighting the archive of Nobel Prize winner Kazuo Ishiguro,...
© LitHub
Back to top
Loading Comments...