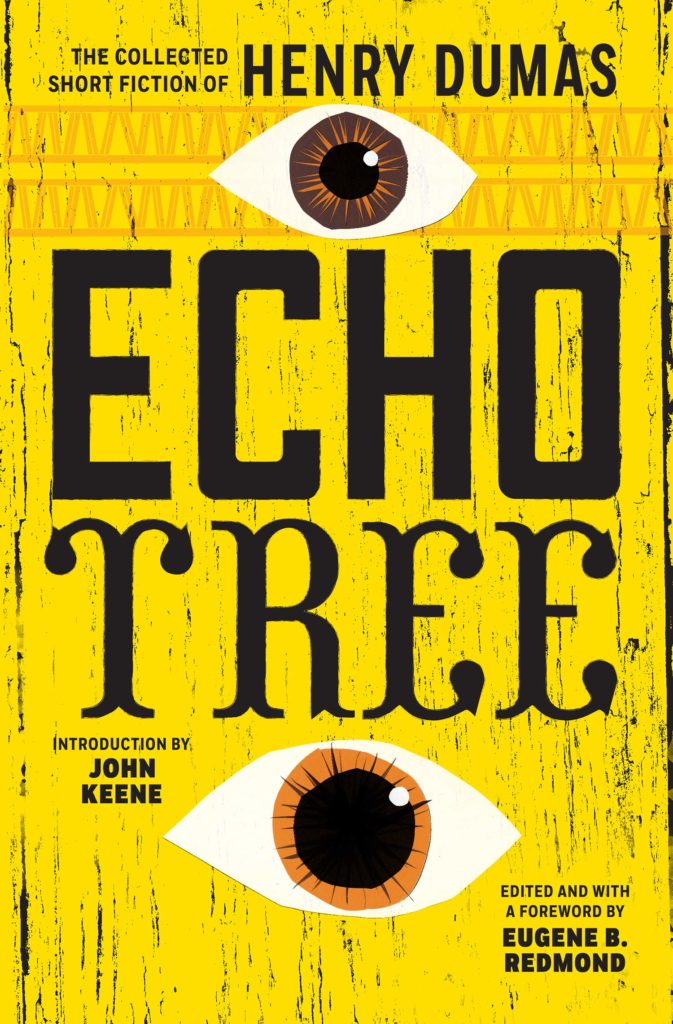 The following is excerpted from Henry Dumas's book of collected short fiction, Echo Tree, which features "vivid portraits of Black life in America." Dumas was born in Arkansas, in 1934, and moved to Harlem at the age of ten. He joined the air force in 1953 and spent a year on the Arabian Peninsula. Upon his return, Dumas became active in the civil rights movement. Redmond, a fellow teacher at Southern Illinois University, helped to make Dumas's work available.

In the dome the prisoner, alone in the silence of centuries, waited. . . .

And all the people gathered together and began a trek across the land. From every corner of the land they came. Crossing the great rivers and mountains, they came on foot, in cars, buses, wagons, and some came IN THE SPIRIT FROM OUT OF THE PAST. . . .

Their leaders stopped them at every crossroad and made speeches, reassuring them that to march against the white-domed city was sanctioned by God Himself. And the people believed. They went forth in processions, chanting, singing, and praying. Sometimes they laughed and shouted.

And the people believed.They marched gladly. Never in the history of the nation had so many people who felt oppressed gathered in a great multitude to express thier grievances.

In the dome the prisoner waited . . . shackled to inertia by a great chain of years. . . .

And the marchers grew in numbers. Work ceased. Factories puffed no smoke. The highways thronged. The past moved forward. And the great white dome in the great stone city became a hub to the troubled mind of a great nation traveling in a circle. . . .

In the dome the silence was stirred by the sound of legions of feet marching. The rumble sifted through the years. The prisoner heard . . . and waited. . . .

Then the marchers descended upon the city. And when the sun was high in the midday, they gathered together and built a great platform.Their leaders came and stood upon it and made speeches, and the people cheered and roared.

In the dome, where webs floated in the semidarkness like legions of ghost clouds, where echoes from the outside sifted in the dome, the prisoner . . . stood up.

Outside the dome the marchers listened to their leaders:

TODAY IS THE DAY!

TODAY IS THE DAY WE WILL SET OUR SOULS FREE!

And the people roared.

TODAY—and the leader pointed to the dome shining in the noon sun like a giant pearl half-buried in the sands of the sea—TODAY WE WILL OPEN THE GREAT DOOR OF THIS NATION AND BRING OUT THE PAST!

NO ONE CAN STOP US NOW! NO ONE! WE HAVE SERVED IN THIS LAND FOR CENTURIES. WE HAVE SLAVED FOR THOSE WHO OPPRESS US. WE HAVE BEEN CHILDREN TO THEM! BUT TODAY WE SHOW THEM THAT WE ARE MEN!

IF THE DOME-MAKERS SEND THEIR GUARDS, THEIR SOLDIERS, AND THEIR DOGS UPON US,WE WILL NOT FEAR . . . NO. FOR WE MARCH IN PEACE. WE MARCH IN THE NAME OF HIM WHO SENT US, AND WE ARE NOT AFRAID. . . .

And the people knelt down and prayed.

JUSTICE WILL PREVAIL! FREEDOM WILL BE OURS! EQUALITY SHALL NOT BE TRODDEN DOWN!

Then another leader stood forth. He was very great amongst the people.

NOW . . . NOW IS THE TIME. TODAY . . . FREEDOM CAN WAIT NO LONGER. WE HAVE ACCEPTED TOKENS OF FREEDOM TOO LONG.

OUR FATHERS WERE BROUGHT HERE IN BONDAGE. AND WE HAVE FELT THE SAME YOKE LIKE BEASTS IN THE FIELDS. BUT WE WILL WAIT NO LONGER.WE HAVE LIVED IN A TOMB FOR YEARS, AND WHILE WE SUFFERED WE SANG OUR SONGS AND FOUGHT AMONGST OURSELVES BECAUSE WE HAD HOPE. GOD GAVE US THAT MUCH STRENGTH TO GO ON. AND WITH THAT HOPE, WE SURVIVED, FOR WITHOUT A VISION, WITHOUT FAITH, A PEOPLE WILL PERISH. . . . LET US GIVE THANKS UNTO THE LORD. . . .

And the people roared.

THE SUNSHINE OF A NEW DAY AND A NEW FRONTIER IS UPON US. RAISE YOUR HANDS, MY PEOPLE, AND STRIKE. . . .

WE WILL REVIVE THE DEAD AND CONVICT THE LIVING!

LISTEN,MY PEOPLE, AND REMEMBER THIS. . . . FOR WHEN YOU TREK BACK TO YOUR CITIES AND TOWNS,THE PRESSURES OF LIVING MIGHT MAKE YOU FORGET.

REMEMBER THIS: YOU HAVE SERVED IN THE FIELDS. YOU HAVE SERVED IN THE KITCHENS, IN THE WAREHOUSES AND THE FACTORIES. YOU HAVE SHED YOUR PRECIOUS BLOOD FOR THIS NATION, AND ALL THE TIME YOU COULD NOT EVEN ENTER THE FRONT DOOR OF THE HOUSE LIKE A MAN. . . . BUT TODAY,WE WILL KNOCK ON THE DOOR AND WITH THE ARM OF THE GREAT SPIRIT,WE WILL OPEN THE DOOR.WE WILL ENTER.WE WILL SIT DOWN AT THE FEAST TABLE, AND WE WILL REST AND NOURISH OURSELVES.

OUR BACKS AND OUR SWEAT HAVE BUILT THIS HOUSE.

THEN I FOR ONE THINK IT ALTOGETHER FITTING AND PROPER THAT WE LIVE IN THE HOUSE WE HELPED TO BUILD, NOT AS CHILDREN, NOT AS SERVANTS, NOT AS MAIDS, NOT AS COOKS, NOT AS BUTLERS,SHOESHINE BOYS, AND FLUNKIES! BUT MEN! THIS HOUSE IS OURS!

And the people applauded.

In the dome the words stung the prisoner. He stirred himself and took a step. But the weight of his chains shook him . . . and he fell.

Outside, the cheers grew louder. The dome trembled. Specks of dust leaped up from centuries of rest and wandered like souls in limbo. Suddenly a passion seized the prisoner.

From the ground he came up slowly, as if he were a lost seed in a sunless cave, a seed that had sprouted into a pale limp stalk trying to suck a bit of precious sunlight into its impoverished leaves.

Riotous cheers heated the day. The sun stood high and hot. Soldiers came. Dissenters and extremists—organized sometimes and sometimes not—jeered at the leaders and threw stones at many of the marchers. More soldiers came. The police rode around in patrol wagons. People fainted. And the great city seethed while its troubles flashed around the world.

A ray of light shot through a sudden crack in the dome. The beam stabbed the prisoner, and he fell back, groaning and moaning as if he had been struck by a great hammer.

Then the doors came crashing open. The people rushed in. And they trod upon sentiments, the truths, the lies, the myths, and the legends of the past in a frenzied rush to lay hold of Freedom. They cheered their leaders, and their leaders watched the movements of the soldiers and dissenters constantly. And no one knew who was to make the right move.

They lifted the prisoner, as if he were a flag, and carried him out of the dome, rejoicing as if a great battle had been won.

And when they carried him into the bright light of the noon sun, he felt a great pain in his eyes. He blinked, shook his head, moaned . . . for the intense light immediately blinded him.

They put the prisoner on the platform and all the leaders gathered around for a ceremony. A hush descended like dust on a windless plain.

Shackled in his chains, the prisoner opened his mouth to speak.

The leaders all stood forth around him and hailed the people.

WE HAVE SET HIM FREE! GLORY TO GOD! THE LORD IS WITH US! LET US MARCH AS SOLDIERS OF THE GREAT SPIRIT! WE CAN SEE THE SPIRIT MOVING AMONGST US! WE CAN SEE! PRAISE GOD! OUR FREEDOM IS OUR SIGHT!

And the people cheered. The leader wrapped his arm around the prisoner, and the chains clanked and pinched the leader’s arm.

WE MARCH FOR OUR FREEDOM, boomed a leader. WE MARCH THAT OUR CHILDREN WILL NOT HAVE TO MARCH!

ALL OF US MUST BE FREE BEFORE ONE OF US IS FREE!

And the people applauded.

SO ENJOY YOUR FREEDOM! GIVE THANKS UNTO GOD, FOR WE HAVE WALKED BY FAITH, AND FAITH HAS GIVEN US LIGHT! WE HAVE PROVEN THAT WE CAN MARCH IN PEACE AND NOT IN VIOLENCE. FOR WHO AMONGST US TODAY DOES NOT KNOW THAT THE SPIRIT IS STRONGER THAN THE SWORD?

And the people sang and danced around the platform until all the leaders came down and joined them.

Beneath the sky the prisoner stood . . . alone . . . trembling, as if he were only a thin line of summer heat wavering in the noonday sun. His chains clanked and choked him.

Suddenly . . . as the people roared in a wild song of joy and freedom, the prisoner stared into the darkness of his sight, and except for the intense heat and the pain, he would have thought he was back in the dome. . . .

Then the platform creaked, broke in splinters, and tumbled to the ground. The people laughed merrily and followed their leaders up the streets of the city.Today was a great day. Freedom had come to them . . . at least for a while . . . and the marching of their feet was their song of freedom. . . .

The prisoner fell to the ground. The wreckage of the mob buried him, and the weight was like all the centuries linked together around his neck.The pounding of the marchers shook his flesh, and the heat of the day burned his thoughts away.

Excerpted from Echo Tree: The Collected Short Fiction of Henry Dumas by Henry Dumas, edited by Eugene Redmond, with an introduction by John Keene. Excerpted with the permission of Coffee House Press.

On Maurice Sendak’s birthday, take a look at some of his rare drawings. 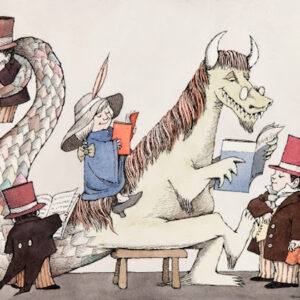 On Maurice Sendak’s birthday, take a look at some of his rare drawings. Today marks the 93rd birthday of Maurice Sendak, titan of children’s literature, whose kindness and empathy for children...
© LitHub
Back to top