The Magic of Everyday Life is Preserved in Ganda Folklore

Jennifer Nansubuga Makumbi on the Rich Oral Traditions
of Her People

The Ganda, my tribe, call themselves Baganda (plural) or Muganda (singular). They belong to Buganda Kingdom in Central Uganda along the shores of L. Victoria. They speak Luganda, which belongs to the Bantu group of languages.

Because of books, a lot of children, especially those of the middle-class, are no longer immersed in folklore at the family level. Western children’s books are popular, primarily to improve English language skills. Still, in rural areas where large extended families are constantly in touch, grandparents indulge the young in folklore. They use myths to explain the whys and hows of phenomena, legends to talk about tribal heroes and their wondrous deeds, while histories are just that. This is where the art of storytelling is passed on. However, many origin myths, the stories that explain how our communities came to be, are taught in primary school as history.

Some Ganda folktales were cautionary—against pride and a focus on beauty and wealth. The world of magic was integral to everyday life in these tales.

The Ganda origin myth, Kintu ne Nnambi, is taught in school. This is the myth upon which Buganda Kingdom is built. It does not matter where a Ganda is; we are descendants of Kintu (our Adamic figure) and Nnambi (the Eve figure). In fact, the genealogy of the Kabaka (king) of Buganda can be traced back to Kintu, the first kabaka of Buganda. It is a convenient coincidence that the first kabaka of Buganda was called Kintu, as was the first man. The two are often conflated even though the kingdom is roughly 1200 years old. This myth is critical to the kingdom and the Ganda. It asserts that we are children of Kintu. Kintu is the beginning of everything.

I was lucky as a child to have constant access to my grandparents, who introduced me to Ganda folklore. Even when I lived in the city with my father, my grandparents insisted that I spend my school breaks with them. And though my father packed a lot of books to read, my grandfather would say, forget them, and encourage me to roam the village and wilderness and in the evening to share stories with other children.

It was here, as I turned Western fairy tales I had read in Brothers Grimm stories into Luganda folktales, that I learned to tell stories. Some Ganda folktales were cautionary—against pride and a focus on beauty and wealth. The world of magic was integral to everyday life in these tales. Gods, spirits, and ghosts were in touch with humans. The dead kept returning. Silly little girls would be swallowed by monsters, and then rescued from the tummies of monsters by wizards. Other folktales were of the trickster kind where tiny helpless animals like the hare, the tortoise, and the mouse outwitted large, fast and ferocious animals like the lion, leopard, and elephant. These brought home the idea that brains were preferable to brawn. But, for me as a child, the folktale was only about entertainment.

This changed during for my first degree in literature. We started by immersing ourselves in African oral traditions and engaging with them as texts. At this point, myths, oral histories and the folktale became old texts that come from the past to speak to us. They gained a new character. They did not mean what they said. They became evasive, elusive and vague. And, contrary to what I thought as a child, folklore were grownup texts.

It was here that I discovered that myths and folktales are coded texts that a person with the right tools can decode to shed light not only on life in the past, but the present and future as well. At the same time, they allow our imagination to leap back into the past and bring it with us to the present.

It was here, during my undergraduate studies, that I first realized that my literary heritage lay not in Western literary forms that I had been taught in school and university thus far, but in these oral traditions that my ancestors had left behind. I found myself agreeing with Angela Carter, who said of folklore,

This isn’t about things women and children do on a wet afternoon, this is about the deepest desires and appetites, the spring of human nature. These fairy tales lasted so long because they are talking to us at a psychological level.

When I started writing fiction, it was only natural for me to go back to these texts and cast a glance on them as a creative pool that I could draw from. For my first novel Kintu, a historical novel, Ganda oral traditions were an archive. I delved into royal histories which serve as the history of the nation. I re-examined three versions of the Kintu ne Nnambi origin myth. Names of rivers and mountains, stories of gods, spirits and ghosts, sayings and proverbs, names of people and places, customs and norms, greetings and place histories were all records of history and beliefs.

To a Ugandan the title Kintu says, In the beginning. What they look for in the novel is how I have reinterpreted their myth of origins. It was important for me, as I started my literary journey, to nod towards my literary ancestry.

My attention to Ganda folklore is not about preservation. Oral African traditions have survived without my intervention.

While in the first novel oral traditions were a resource, in my second novel, A Girl is a Body of Water, I bring in Ganda folklore. I invite the reader to analyze myths and folktales with me. I ask them to compare their own tales to the Ganda’s. I suggest that they take a second look at their traditional creativity—what light do they shed on who we were, who we are and who we could be?

I bring a feminist reading to Ganda folktales to see what other meaning can be teased out. I do this because I believe that variations of these tales are common around the world. And I hope to engender conversations not only with my novel, but with cultural creativity from around the world.

I must emphasize that my attention to Ganda folklore is not about preservation. Oral African traditions have survived without my intervention. In fact, I am reluctant to put them down in the written (for posterity) because that takes away the dynamic nature of folklore. Different performers, of different generations, add something new to these stories when they perform these forms. They also discard parts of the stories which have been made redundant by the changing world.

This is what allows folktale to travel light, to keep lively and mobile through time and generations. This is why folklore in my novels is interpretive. It allows generations after, or contemporary creatives, to keep these oral tales new. Besides, these stories do not come with copyrights and I believe they should remain as such. 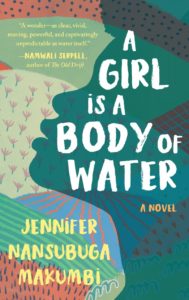 Jennifer Nansubuga Makumbi’s novel A Girl is a Body of Water is available now. Featured image: Kintu and Nambi, by Gloria Ssali.

Jennifer Nansubuga Makumbi is a recipient of the Windham-Campbell Prize and her first novel, Kintu, won the Kwani Manuscript Project Prize in 2013 and was longlisted for the Etisalat Prize in 2014. Her story “Let’s Tell This Story Properly” was the global winner of the 2014 Commonwealth Short Story Prize. Jennifer lives in Manchester, UK with her husband and son. 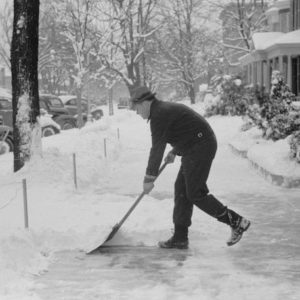 Before walking to work, and in still-falling snow, my father in hat, suit, topcoat, and galoshes would scoop our sidewalk....
© LitHub
Back to top
Loading Comments...