Brianna Zimmerman on Untangling the Forces of History

The mail-in ballot was smaller than I expected. It came in a mid-sized, striped envelope, and when I opened it there was the official document with the list of candidates and an envelope to return it with.

I looked at it, propped up against the counter in front of my laptop. I googled “how to vote via mail-in ballot in New York” because Twitter had warned me that it was not a simple process. After extensive internet searching gave me the information I needed and it was time to send it in, my roommate and I stood staring at the kitchen table, like: Do we need to get it baptized or something, too? And when I dropped it in the mailbox on the corner, I half-expected someone to return it, telling me that it did need some ridiculous certification process to make sure it would be counted.

I learned, via Google and then further research, that in New York absentee voting isn’t so complicated, so long as you receive your ballot. By contrast, Georgia Gov. Brian Kemp canceled more than 1.4 million voter registrations when he was Secretary of State, for mostly Black voters. In Ohio, the state automatically de-enrolls voters every six years and sends them a postcard to let them know. If they don’t see the postcard, they are simply de-enrolled without their knowledge. In Pennsylvania, if the voter ballot does not get put in an extra “security envelope” meant to prevent election workers from being able to see the contents (although most ballots are sorted by machine these days anyway), the vote will not count. Eleven U.S. states require absentee ballots to be signed by a witness before being mailed in, and witnesses must provide a signature and an address. In Wisconsin, more than half of the ballots cast in 2020 primaries were thrown out because they didn’t have a witness signature. In the case of absentee ballots, all of them are sent to the election offices via the United States Postal System, which Trump has spent significant amounts of time financially gutting in the past several months.

Essays sometimes begin in strange ways; you Google one thing, and then you’re reading 12 books on a variety of topics you are convinced are related. I initially thought that I was going to write about the literary importance of the U.S. Postal System, because Trump has been trying to wreck it and because I wanted to talk about how it represented freedom of expression, the free exchange of ideas and information, but also human connection, things like friendship and romance, political plans, philosophical thought, all of that.

But then, well. American history is always more complicated.

My research started with the way the Trump administration is rolling back funding for the United States postal system. In the months before the election, on-time delivery rates dropped ten percentage points. The Postmaster General, a friend of Trump, also ordered the reduction of overtime hours and stopped postal workers from making extra trips that would ensure on-time delivery, in a purposefully misleading and voter-suppressive series of events.

I thought I’d write about the USPS’s legacy, how the writers Ralph Ellison and Albert Murray, Hannah Arendt and Mary McCarthy, Zelda Fitzgerald and F. Scott used it to write each other—how it let romantic and platonic and intellectual relationships and friendships happen, the ones that shaped thought and art, even over long distances. I kept researching and found out it had been known as one of the greatest information and communications systems in the world, and was democratized so that rural and urban areas had the same access to mail and newspapers. I found out that William Faulkner had been a rural postmaster, in charge of sorting mail for his constituents, and a pretty bad one. I was struck by the expression “Man of Letters”: someone who is learned, self-reflective, communicative, in conversation with the self, the news, the larger world. This felt reflective of the importance of the mail-in ballot during this past election. I’d talk about how expanding the United States Postal Service through the mid-nineteenth century led to a golden age of self-expression. How, also, the creation of the Post Office established the right to having opinions and ideas, no matter what they were.

I was going to delve into all of this. But I’d also been going to the Black Lives Matter protests in New York City all summer, seen police do violent things, felt police do violent things. I started to think that these three things—the issues with the U.S. mail-in ballot, the movement for Black lives, and the way we connect with each other—were inseparable.

This kind of dancing in the streets felt like articulation.

And then I came across one paragraph, small, in Winnifred Gallagher’s extremely comprehensive history of the USPS. I learned it was law until 1865 that “no other than a free white person shall be employed in carrying the mail,” because politicians in the late 18th century “feared that if enslaved people, some of whom were literate, had access to the mail, particularly newspapers, they might learn of the Haitians successful rebellion against the French in 1791, and follow their example,” and because they feared that “[Black people] will learn that a man’s rights do not depend on his color.”

And then, as always happens in American history, the real questions appeared. And it was clear that these things were, always and still, connected to each other, and to the various histories of the struggles for liberation by peoples in America.

But I was hesitant to try to answer the new questions. They were about how to contend with generations of racism, and voter disenfranchisement, white supremacy and its violence, and all of these questions were resting on top of this whole question of what American freedom and American citizenship means. And I am not Black or brown or a person of color and can’t know those struggles for freedom, inter-generationally or personally, nor am I a PhD or a philosopher or a politician, whose job it is to know the history of these theories or put into action policy that will effect systemic change. I am a 23-year-old white woman born and raised in America. I didn’t know where I stood in relation to these questions, or how to approach them, only that they were there, hanging in front of me. And to turn away from hanging questions seemed to be a mistake from the past.

But then I remembered the Black Lives Matter protests, and in a protest, something very clear is being articulated. Not in words. I thought maybe instead of trying to answer those questions myself, I could try to say what I’d seen articulated there.

Marching up Broadway and then through the East Village after the lack of indictment for the policemen who murdered Breonna Taylor, 1,500 of us moved forward in something that was somewhere between a march and a dance. There was a band at the front with drummers, a trumpeteer, speakers held on bikes, metal poles banging against trash cans, then ringing out against bike frames, voices rising as souls. Anger, lots of anger. We streamed down Third Avenue past families eating dinner at outdoor tables and someone threw eggs from a window at us but we were protected by our chant, our movement: “This is what America looks like,” people masked on sidewalks began to clap and cheer.

I didn’t move my body for Breonna Taylor’s death. My older brother died a few years ago and so I know grief too well to dance for it; besides, this was music of revolution, not grief, although of course they are related. I moved for a fight against death, which is to say a fight for freedom and aliveness and urgency to recognize the value of living (which includes things like a right to an honest and full education and the right to cultivate a home without being shot, to have an identity without being suspected, to be able to stare out the window for a moment, thoughtful and fulfilled, while the sun rises).

A voice led us, lithe and confident, almost what you would hear at a crowded club, hissing, “This, is revolution,” but it was not meant for us to hear the way we would hear the bass at clubs. This voice had probity. I believed in it, I realized. Our disobedience in the face of the absurdity and irrationality of the world as it is. An America that realized the failure of Reconstruction, the reparations it owed, the shame of a public education system that told only half-truths, which didn’t teach the civic values of the Black Panther Party or deconstruct the terrible ideology of whiteness, an ideology which ought to be tackled the same way Nazism is tackled in Germany—broadly held in public memory and discourse.

We were united in making sound to drown out the deafening silence around white supremacy in American government and American culture, in standing for what neither political party seemed to see.

Dancing usually does nothing but produce feeling in me, like good writing should. This kind of dancing in the streets felt like articulation. The chants rose: “We are what America looks like,” and “This is what Black Joy looks like” and “White folks, white folks, this is our fight too,” which produced more than simply feeling. It produced the unarticulated atmosphere of what we, collectively, knew to be our America, and it was us, ourselves, this, right here.

I say we hesitantly, knowing that I don’t speak for anyone, but rather trying to articulate a feeling that we were we, not individuals in that moment, united in this vision and knowing we depended on each other, we existed in society together; individualism and solipsism and systemic oppression was something we rejected, we. I say we because we were united in making sound to drown out the deafening silence around white supremacy in American government and American culture, in standing for what neither political party seemed to see, in taking responsibility for our society, not riding apathy, making noise as one unit, without simplifying the vast differences in experience between white Black brown every hue every person.

Maybe the idea I reflected on, walking home after 11 miles that day, was just that the question of what comes next cannot be answered alone.

There was a form of literature there, in that version of America, the atmosphere existing on that pavement, that pounding of feet and feeling of home. And by literature I mean an answer to the question: how do we connect and know each other in a nuanced, complicated world, where history layers itself over the present? It was a Barthesian kind of literature in its playfulness, its joy, its revolution through defying form and expectation. But there was also a Sartrian kind—the kind that throws you into battle, that forces you to stay, that says, “Once you have begun, you are committed, willy-nilly.”  And while Sartre writes that the writer speaks for freedom, he also cautions: “his own freedom is not so pure; he has to clean it.” But Toni Morrison, Ralph Ellison, Cornel West, James Baldwin, Black American intellectuals writing on Black liberation have always said this, too. Hopefully they’ll be at the forefront for the rest of us this time around.

Brianna Zimmerman graduated from New York University with a B.A. in The Politics of Trauma and Translation. She lives in New York City.

Betsy Bonner Tracks the Ghost of Her Sister's Life 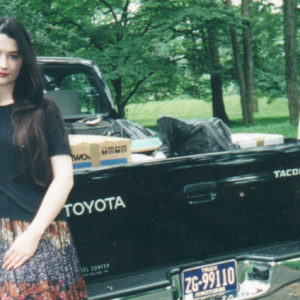 Betsy Bonner Tracks the Ghost of Her Sister's Life After reading an advance review copy of Betsy Bonner’s debut memoir, The Book of Atlantis Black, in a single-sitting,...
© LitHub
Back to top